Life at the Fish Market

Fish markets in the States are generally judged by their degree of sterility, cleanliness and lack of, well, fishiness. In Galapagos, as in many countries around the world, there is a much closer connection between the fish, the fisherman and the fish market. Each morning on my way to the Symposium and each evening on my way home, I pass by a little covered area along the shore of Pelican Bay that is the site of an open air fish market and which is also the site to some of the most amazing wildlife battles that I have seen. Throughout the day, local fishermen tie up their little blue boats along the dock and bring ashore all sorts of fish to sell. 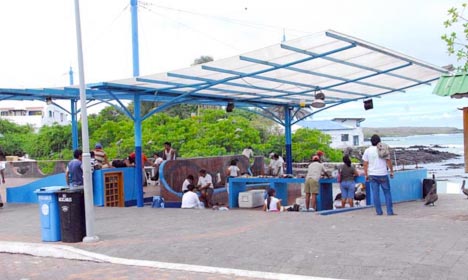 There is an L-shaped table that along one side, the fishermen will clean their catch and then, place them in piles, either on the floor for the really big fish, or on the other side of the table for the smaller ones, as people gather to choose the fish that they want to take home for dinner. Many of the fish are apparently pre-sold to the local restaurants so that it is possible to literally follow the fish you want from the fisherman to the restaurant and have it show up on your plate later that evening. 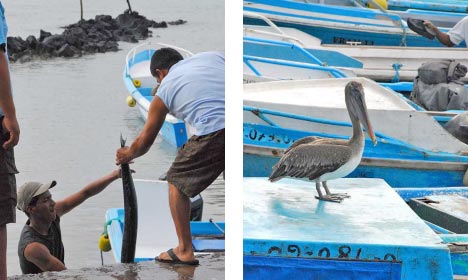 I have seen quite a few fish that I recognize, such as Yellowfin Tuna, Wahoo, Grouper and others but also a great many that I’ve never seen before. If I am there early enough, I might be lucky to see the fish while it is still in one piece which makes recognizing them a little bit easier but as the day goes on, the fish are reduced to smaller and much less identifiable pieces.

One thing that I noticed right away was that the biodiversity of Galapagos wildlife was higher around the fish market than in any of place that I had as yet seen on the Islands. There seemed to be a generally accepted truce between all the creatures that were hanging around the market and the fishermen as long as each accommodated the other’s needs every now and then.

The Pelicans were the most numerous and would actually jump up on the table as the fish were being cleaned and for the most part, left the fish alone as long as the fisherman would toss them a couple of scraps as they cleaned, skinned and gutted the fish. Every now and again, the bargain was not being upheld in the pelican’s mind and they would try to help themselves to a choice morsel only to have the rather irate fisherman grab the fish back, wash it off under the faucet and continue the cleaning process.

There was one rather cunning pelican who unbeknownst to the fisherman, had made off with one of the wahoo and had dragged it just around the corner out of sight of the fish’s rightful owner. However, this was a clear case of the pelican’s eyes being much larger than its stomach because it just stood there, staring down at the wahoo’s head and seemed to have no idea what to do with it. The head was too large and heavy to carry away and probably too big and bony to swallow whole – so he just stood there looking very puzzled. A few moments later, the fisherman realizing that one of his fish was missing a head came looking for it and when at last he found it, snatched it away from the very forlorn looking pelican, washed it off and placed it back on the table. 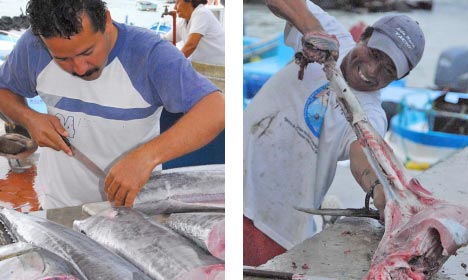 Second only to the pelicans in brashness was a solitary sea lion who I have seen everyday and who from his actions, considers the fish market his personal feeding grounds and the fishermen, his meal ticket.  He’ll swim around the boats and when he spots one that looks like it may actually have some overlooked fish, will leap out of the water, fly over the gunwale and land in the boat with the grace of an acrobat.

If the boat did not have anything to his liking, he’ll make his way over to the dock and waddle up to one of the fishermen who he appears to have a special affinity for and nuzzle up to his leg or rest his head on the fisherman’s foot. 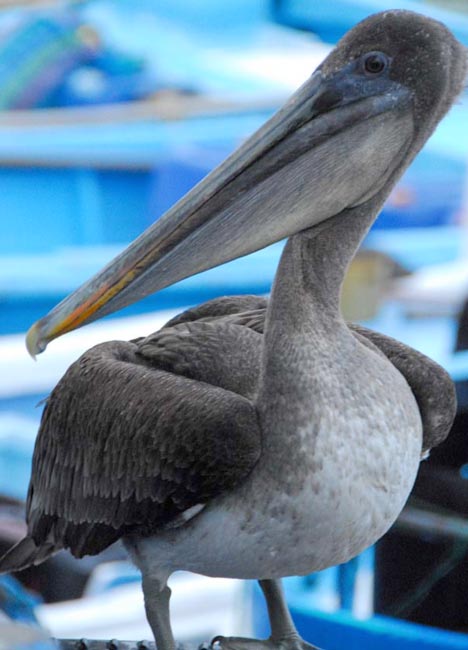 This entry was posted on Saturday, July 25th, 2009 at 3:35 pm and is filed under Journey to Galapagos. You can follow any responses to this entry through the RSS 2.0 feed. Both comments and pings are currently closed.

One Response to “Life at the Fish Market”