My journey to Galapagos began with a letter of invitation that I received from the Charles Darwin Foundation which included the following statement:

“Recognizing the great contribution of your research and of NASA developments in remote ocean sensing across the dynamic Galapagos region we invite you to deliver a lecture as part of the Galapagos Science Symposium,  July 20-24, 2009. This event celebrates Darwin’s 200th birthday and 50 years of science for conservation working to develop a sustainable future for the islands.  We would also take this opportunity to invite you to participate in the marine ecological and oceanographic research planned aboard the Galapagos National Park Service vessel M/N Sierra Negra.”

Although my very first peer reviewed publication 25 years ago focused on the Galapagos, and even though I have been involved in collaborative research with a number of scientists working in the Galapagos over the years (including a recent and very comprehensive program that was co-sponsored by NASA), I had never actually been to the islands.  Consequently, when this invitation arrived, I found it an offer impossible to refuse.

Satellite Color Observations of the Phytoplankton Distribution in the Eastern Equatorial Pacific During the 1982-1983 El Niño (pdf, 916 KB)

The symposium organizers had spent a great deal of time planning the Symposium and in trying to bring together researchers covering all aspects of Galapagos science to share their expertise and perspective over the course of the week and to not only present their work but perhaps more importantly, to learn from each other and strategize how best to understand and protect this incredibly unique and unfortunately endangered ecosystem.  I will let the words of the organizers provide the context, goals, aims and specific themes of the workshop.

Context
2009 marks the 200th anniversary of Darwin’s birth, the 150th anniversary of the publication of his seminal work “On the origin of species by means of natural selection, or the preservation of favoured races in the struggle for life” and 50 years since the establishment of the Charles Darwin Foundation (CDF). We will celebrate these three events in a way that will focus international attention on one of the world’s most vulnerable and unique ecosystems.

Goal
The goal of this symposium is to bring together international expertise to discuss the future of conservation and sustainable development of the Galapagos Archipelago. We invoke the inspiration and courage of Charles Darwin to motivate participants in this discussion.

The Galapagos are not used to hosting major scientific symposia, especially those involving several hundred scientists with all their computational needs (laptops, LCD projectors and most importantly, air conditioning) so the only venue on the islands that could accommodate all these people was the “Salon de la Ciudad I. Municipalidad de Santa Cruz”,  the local government’s town hall.  I don’t know whether this was done in anticipation of the symposium but all the exposed wood had been freshly varnished and all the chairs in the auditorium had just been repainted with a thick, gray, enamel paint which in the humidity of the islands had not completely dried by the time the symposium started. Nonetheless, the wealth of knowledge presented that first morning was truly remarkable and while the air was thick with vapors, all participants remained in their seats throughout the day which may or may not have been related to the slightly tacky armrests.

The meetings began between 8:30 – 9:00 am and aside from a couple of short coffee breaks and one for lunch, continued without stop until nearly 6:30 pm every evening, which is just about the time the sun sets here at this time of the year.

As for me, rather than the more typical science-based talk that I would have normally given in a situation like this, I realized that it would be somewhat arrogant of me to presume to be able to tell some of the world’s leading experts on these islands anything that they did not already know. 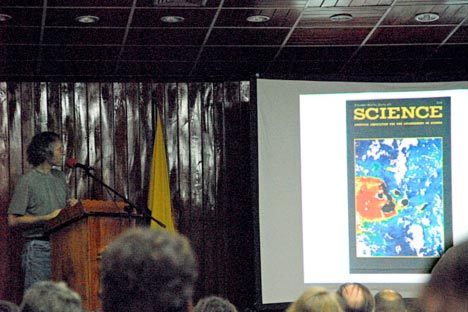 So, I decided to try something a little different and present a story of both the development of my career as an ocean color scientist starting with my first work about the Galapagos and the advances over the past twenty five years in ocean color science since the two were so tightly interwoven.  The title of my presentation, “Satellites, Seabirds and Seals – A twenty five year retrospective” was based on a paper that I had quite interestingly written for a book published by the Charles Darwin Foundation in 1985 documenting the effects of the 1982-83 El Nino in the Galapagos.

I traced the hurdles that a novice ocean color scientist faced back in the early days of trying to work with the data that was collected by the Coastal Zone Color Scanner (CZCS), through the planning for the SeaWiFS mission, and finally highlighted the ease with which anyone, anywhere in the world can access near-real-time satellite data products through the advances in the internet and the world wide web, and as I mentioned in an earlier journal, to  have those images delivered directly to your desktop via e-mail even in a place as remote as the Galapagos. 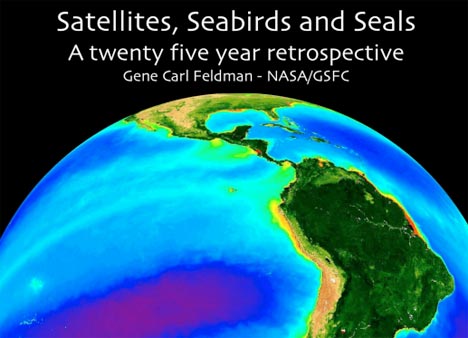 This entry was posted on Thursday, July 23rd, 2009 at 3:53 pm and is filed under Journey to Galapagos. You can follow any responses to this entry through the RSS 2.0 feed. Both comments and pings are currently closed.

3 Responses to “Powerpoint in Paradise”