“These islands at a distance have a sloping uniform outline, excepting where broken by sundry paps & hillocks. — The whole is black Lava, completely covered by small leafless brushwood & low trees. — The fragments of Lava where most porous are reddish & like cinders; the stunted trees show little signs of life. — The black rocks heated by the rays of the Vertical sun like a stove, give to the air a close & sultry feeling. The plants also smell unpleasantly. The country was compared to what we might imagine the cultivated parts of the Infernal regions to be.” Charles Darwin, 16 September 1835

I had read these words in Darwin’s Beagle Diary of his first encounter with the Galapagos from the deck of the Beagle, but their true impact only hit me as the airplane that was carrying me the 1,000 kilometers from Quito started its descent through a nearly continuous layer of clouds. With my nose pressed to the window, I was looking for anything that was neither ocean nor cloud since the two seemed to be nearly indistinguishable. As we finally broke through the last cloudbank there, off in the distance, were two lumps of volcanic cinder rising out of the ocean. Realizing that neither one of these could possibly be large enough to land an airplane on, I strained to look in the direction that the plane was heading and there, true to Darwin’s description, were the Galapagos.

First view of the Galapagos Islands.

As the plane came roaring down the runway and began to slow, I could begin to see just how accurate Darwin’s first impressions were. Heaving lumps of gray, brown and black volcanic rock emerged from the ground almost as if a giant hand had pushed them up from below. Scattered amongst the rock were the most sparse, otherworldly vegetation that I had ever seen. Short stubby trees with twisted, stark white branches contrasted with the nearly ubiquitous cactus trees that stretched as far into the distance as I could see. At the end of the runway, the plane turned around and headed back towards the terminal which looked to be just a single, large open building with a roof. 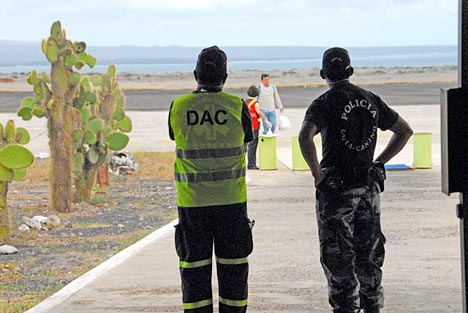 The “welcoming” committee at the terminal. Cactus trees at left.

After climbing down the stairs to the tarmac, we were led to the terminal, but before entering, we were directed towards two large blue mats that were soaked in some kind of liquid which we were instructed to walk across to prevent the introduction of any foreign matter on the soles of our shoes. The introduction of non-native species has been one of the main problems facing the Galapagos from the time of the first contact with humans, which is in fact one of the topics of discussion at the upcoming science symposium that I will be attending this week. Standing between the mats and the terminal were two men in uniform with their hands extended, which I thought was quite a welcoming gesture, but as I put my hand out for what I assumed was going to be a handshake of welcome, I was instead squirted with something from the bottle that was held in his other hand. He then gestured that I was to rub my hands together and proceed on. Not one to question, I did as instructed and proceeded to join the line forming at the immigration counter. 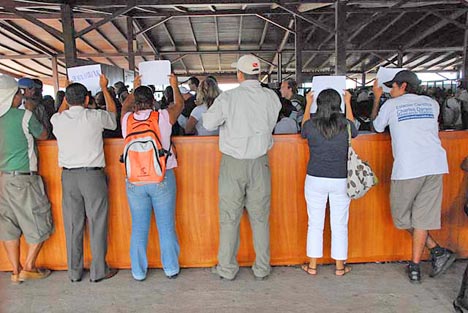 People waiting for luggage and arrivals.

With immigration and customs checks behind me, I made my way through the crowd of people waiting for luggage and stepped outside. To say that the scene outside the terminal was chaotic would be an understatement. Large buses jockeyed for position alongside the terminal, each with its airline’s logo plastered on the side, ready to take passengers to either the harbor where the tour boats were anchored (where visitors would spend their time in Galapagos on boats touring the designated visitor spots in the company of a Galapagos National Park Service guide) or to the channel separating Baltra Island from Santa Cruz, where little ferry boats were waiting. One bus after another was filled with luggage and passengers and would head off to be replaced by another.

One of the many buses.

In the time that I was waiting for my traveling companions to claim their luggage and meet me outside, three more planes landed from the mainland, disgorging several hundred more visitors to the island. In an attempt to get away from the craziness at the terminal and in the hope of seeing something of the wildlife that have made these islands so famous, I took a walk, but the only Galapagos creatures that I saw were to be found within the row of souvenir shops that lined the road. 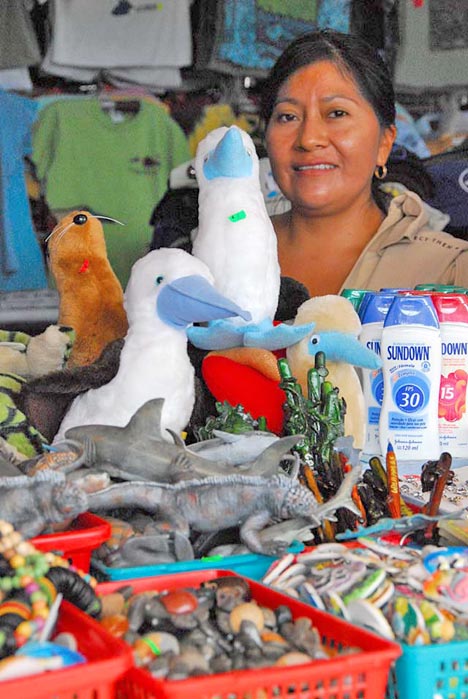 There was one Galapagos fur seal that I saw, but he had obviously seen better days. I must admit that my first impressions based on the scene at the airport were not quite what I had expected and certainly, for someone whose indoctrination to the islands had been through reading the journals of Darwin, FitzRoy and Melville was not quite sure what to make of it all. However, in my wanderings I noticed a sign saying that the airport was undergoing a major renovation project and that it was going to be rebuilt with “green” building techniques, so I’ll just assume that future visitors would have a very different experience. 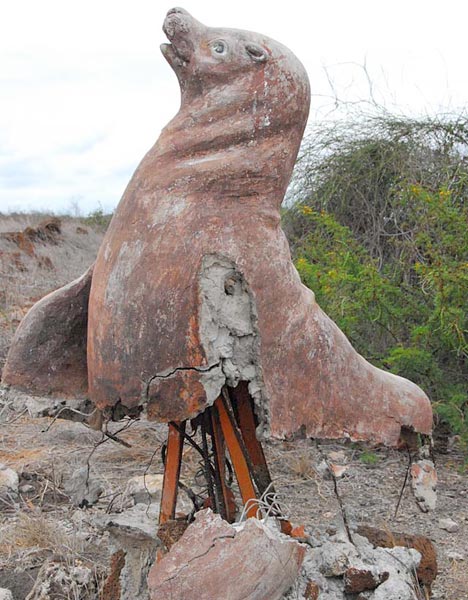 I was finally joined by my companions and we made our way onto the bus and soon were headed off down the road from the airport towards the ferry dock. Again, I strained to see even a single one of the creatures that I had read so much about, but I saw nothing except the seemingly endless stands of cactus emerging from the broken lava fields.  At the ferry dock, we all helped toss our bags on the top of the little boats that were tied to the docks and one after another, the passengers climbed on board and those who could find a seat, sat on long wooden benches along the side, and those who couldn’t, stood. It reminded me more of a New York City subway at rush hour than a ferry across the sparkling blue waters of the equatorial Pacific Ocean. 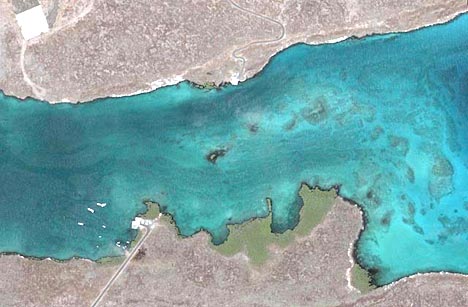 Image of the channel between Baltra Island and Santa Cruz Island.

As the crew untied the lines and we started to drift away from the dock, I looked up and saw the smiling face of a little girl who I later learned lived on the Islands. At last, I felt welcome to the Galapagos.

This entry was posted on Tuesday, July 21st, 2009 at 3:00 pm and is filed under Journey to Galapagos. You can follow any responses to this entry through the RSS 2.0 feed. Both comments and pings are currently closed.