Prawlers, Engineers, and the Future of Oceanography at Sea

A number of the instruments deployed during SPURS are “works in progress.”  They work well, but need exercise in new or more challenging environments to perfect them. The whole of SPURS is an experiment, taking salinity measurement in the ocean to an entirely new level. Extended deployment of sensor webs in hostile and distant environments is something NASA needs to perfect for the future of Earth System Science research and for planetary exploration.  One of the overarching goals for those involved is to advance the use of autonomous measurement platforms for real-time global oceanography.

The Prawler (Profiler + Crawler) instrument from NOAA Pacific Marine Environmental Laboratory (PMEL) is one example of SPURS exercising a work in progress. It is also a place where we can see common goals between NASA and NOAA in physical oceanography.

Prawler closed on the laboratory bench.

The Prawler is a wave-powered subsea instrument that eliminates the need for multiple sensors on a mooring line. During descent, it makes a profile using whatever sensors have been installed and communicates those via inductive modem to the surface buoy (from there they are communicated via satellite to shore). Once the Prawler falls to the pre-determined bottom depth (arount 1,640 feet, or 500 meters), a micro-processor activates a ratcheting mechanism and harnesses the wave motion of the mooring to crawl back up the mooring line. 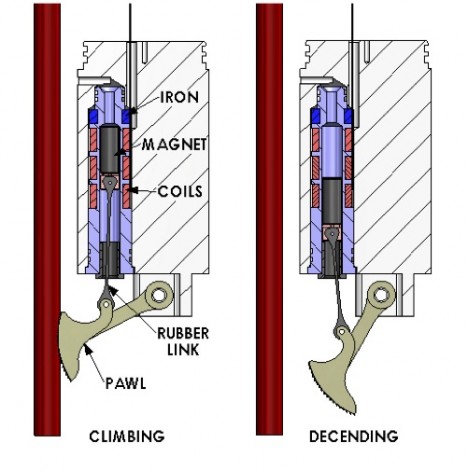 Diagram showing the ratchet mechanism on Prawler that allows it to climb the mooring wire. 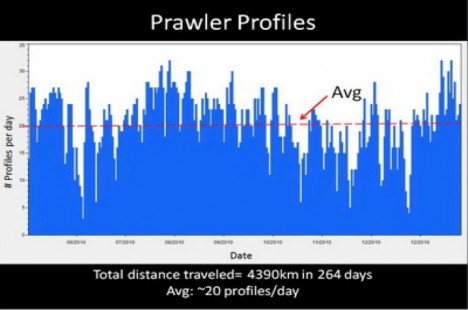 An example (from a prior test of Prawler in the Pacific Ocean) of how many profiles one can expect to make using one Prawler during the course of a year. Provided by Billy Kessler, NOAA PMEL.

Billy Kessler at NOAA PMEL and University  of Washington is leading a NOAA SPURS project to test the Prawler technology. Billy and I were in graduate school at University of Washington together in the early 1980s and shared the same PhD mentor, Prof. Bruce Taft. It’s wonderful to be working with Billy again after all these years!

John Shanley and Andrew Meyer (aboard the Knorr) are two NOAA PMEL engineers who have been involved with Prawler mooring design tests for the last 3 years. They have already participated in some major tests of Prawler on moorings (a 7-month and a 4-month deployment in Hawaii, each time with two Prawlers, and many tests in Puget Sound). SPURS offered a great opportunity for a full year deployment near the heavily-instrumented Woods Hole mooring whose deployment I described in an earlier post. 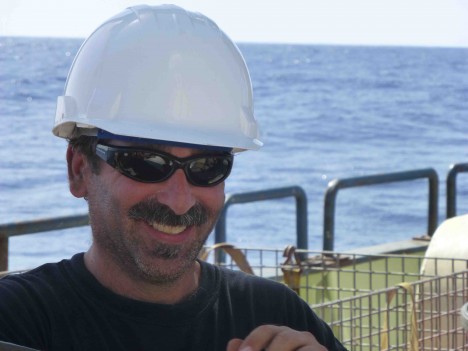 John and Andrew are fortunate to work in a small group of engineers where they get to work on all aspects of the Prawler, from design input to the actual fabrication of the instruments, to testing materials and components, to full ocean deployments. “From art to part,” as the boss likes to say! The NOAA PMEL mooring shop has a long history of excellence providing products that meet both researcher and operational requirements.

Seeing the Prawler used in SPURS after years of development is the light at the end of the tunnel for John and Andrew. This project has been a cumulative effort involving their entire engineering group. There have been four radically different versions, countless numbers of modifications, long days and weekends of machining parts. They have seen Prawler grow from just a few scribbles on a white board to deployment of the “finished” product over the stern of Knorr on this voyage. They both describe persistence as the key to success.  It almost brings a tear to your eye to hear Andrew describe to me “the last few touches before deployment as we assemble and ballast, to bolting it on the mooring line and dropping it into the ocean, bring a great sense of accomplishment.”

For Andrew and John being out here on Knorr to deploy the Prawler is just icing on the cake. The interaction with people from other institutions and seeing many different ways and means of measuring salinity truly puts the Prawler capability in a new perspective. They are both standing watches and working with the other teams to expand their ocean instrumentation expertise. They certainly now know that they too are on the leading edge of global real-time ocean observing in the 21st century. From interactions aboard ship they go home energized with ideas for the next innovation! 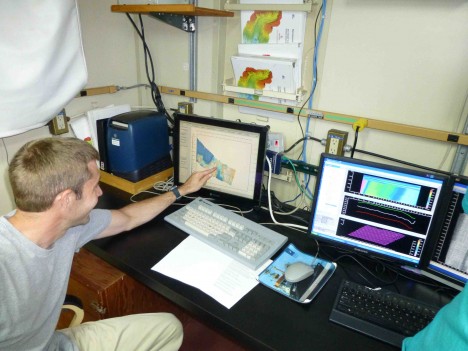 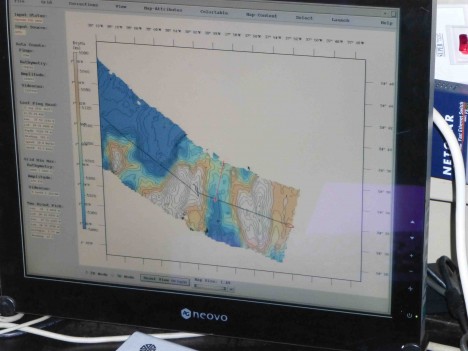 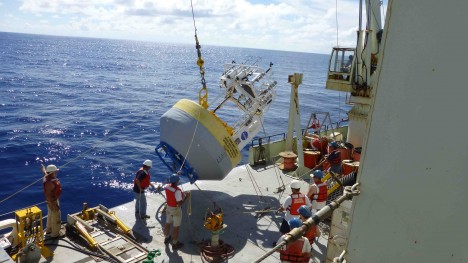 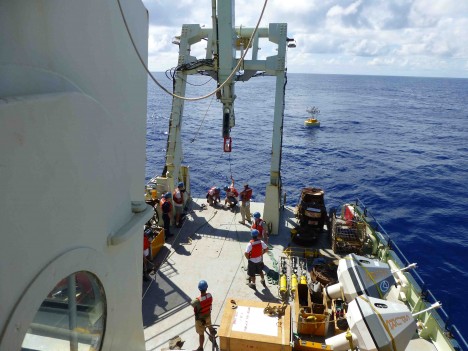