The Long Way to Kulusuk

As I write this post, on Tuesday, March 26, our team is spread across the globe. I am at Dulles airport near Washington, D.C. waiting to get on a plane that will fly through the night to Iceland, and then onto Kulusuk, Greenland, tomorrow. My gear includes a thick parka, boots, cloths, medicine (just in case) and even some chocolate for Easter, all packed in a nice water-tight bag so no snow will get in it. Jay, Clem and Ludo are already in Kulusuk and Rick is waiting in Iceland to get on the same plane that will take me to Greenland tomorrow. 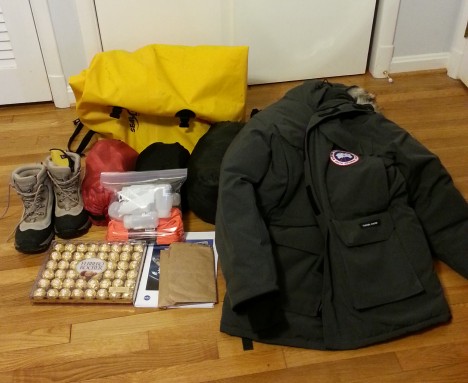 Some of my gear, before packing.

How did we all get so spread out? Well, it was mostly caused by the unpredictably of weather canceling flights and the limited number of flights into Kulusuk (there are only two each week — on Wednesdays and Saturdays).

To figure out our logistics, we have to start with our put-in date that is scheduled for April 1. “Put-in” is when we go from Kulusuk to our field site on the ice sheet to put in our camp and start the science. A put-in date of April 1 means we all need to arrive in Kulusuk at least one flight before the connection flight, to give us a cushion. Rick and I will arrive on the March 27 flight, which is the last flight with a cushion. We would have all arrived on this flight but the Easter Holidays threw a wrench in our schedule: all services will be closed in Kulusuk from March 28 to April 2. So Jay, Clem and Ludo arrived early to buy some extra food, fill fuel canisters and make sure all the science cargo arrived safely.

To get to Kulusuk, we go through Reykjavik, Iceland. Clem and Ludo got an extra day in Iceland because they had a boomerang flight. “Boomerang flights”, common in the polar regions, happen when a plane takes off for a location and then the weather takes a nasty turn, so the aircraft has to return to its point of origin. So you take a long plane ride but end up right back where you started – that’s one of the reasons we plan lots of extra days in our schedule for delays.

Beyond getting people to the field, we have to make sure all of our gear is there as well. Our gear was shipped the first week of March – different shipments were sent from Kangerlussuaq (Greenland), Greenbelt, MD, Salt Lake City, UT and Madison, WI. We have about 4,000 lbs of gear, including the science equipment, camping equipment, generators, and food. Jay, Clem and Ludo have confirmed that everything arrived safely except for our deep drill, which, proof of Murphy’s Law, happens to be one of the most important pieces of gear. We knew it had been delayed in shipping for a few weeks and right now, it’s in Kangerlussuaq, waiting to get on a plane to Nuuk and then onto Kulusuk. Hopefully it will arrive Tuesday, but the latest news is another delay due to airplane maintenance that canceled the flight to Nuuk. There are still two flights that could get the drill there in time, so we are watching this closely.  If the drill does not arrive in time, we will have to delay the field work.

Right now the weather is beautiful in Kulusuk, so hopefully all the pieces (people, gear and weather) will come together for an on-time field season. Now I will board a plane, hopefully get some sleep, and send my next update from Greenland.