I live in Seattle, part of the Pacific Northwest in the NW corner of the continental United States. We have the reputation of being a very rainy place, but it’s nothing compared to the Olympic Peninsula, just to my immediate west. Starting next week, we begin the Olympic Mountain Experiment, or OLYMPEX. It is a NASA-led field campaign, which will take place from November 2015 through February 2016. The goal of the campaign is to collect detailed atmospheric measurements that will be used to evaluate how well rain-observing satellites measure rainfall and snowfall from space. In particular, OLYMPEX will be assessing satellite measurements made by the Global Precipitation Measurement (GPM) mission Core Observatory, a joint mission by NASA and the Japan Aerospace Exploration Agency (JAXA), which launched in 2014. 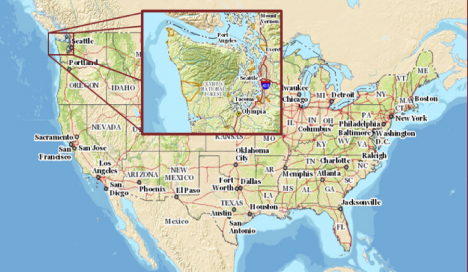 The Olympic Peninsula is an ideal location to conduct a ground validation field campaign. The Peninsula is home of a temperate rain forest, with old growth trees covered in lichen and moss. Its active winter storm season consists of wet weather systems traveling from the Pacific Ocean, over the coastal region and into the Olympic Mountains. The peninsula reliably receives annual precipitation amounts ranging from over 100 inches (2500 mm) on the coast to about 180 inches (4500 mm) in the forested mountainous interior. 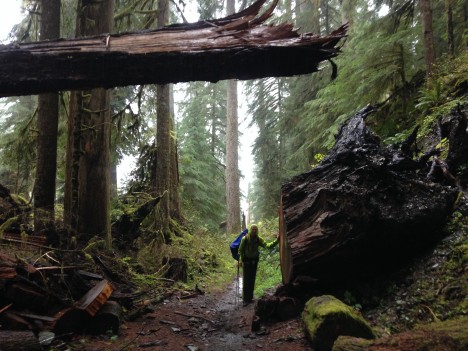 This is Joe Zagrodnik, graduate student at University of Washington, on his way up to install instruments at one of our ground site. That’s some tree.

I am a Senior Research Scientist and Senior Lecture in the Atmospheric Sciences department of University of Washington and Project Manager and one of the lead scientists of OLYMPEX. Together with colleagues here at UW, other universities, Environment Canada and, of course, NASA, we have set up ground instruments including rain gauges, advanced weather radars, and balloon launching sites to monitor incoming storms. Simultaneously, we will collect data from three aircraft flying through and above rain clouds, as well as from the GPM Core Observatory and other rain-observing partner satellites when they pass overhead.

Much of our ground network is in place and collecting data. We are currently experiencing a very wet storm system and the NASA ground instruments measured 24-hr rain amounts ranging from 35 mm (1.3″) on the coast to over 170 mm (6.7″) at a station at 540m elevation. This station is actually not at a terribly high elevation. Mt. Olympus is much higher at almost 2400 m, but 540m of elevation is enough to really affect the storms systems when the air is forced up and over the terrain enhancing the rain producing processes. 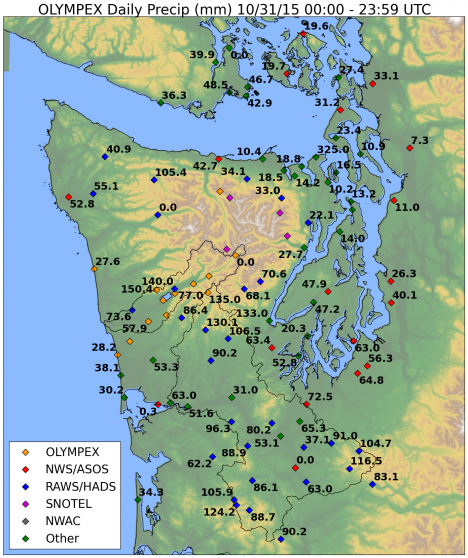 This is a map of 24-hr precipitation totals in mm as measured at a variety observing stations, including some installed for the OLYMPEX field project.

As the field campaign ramps up over the next couple of weeks, we will keep everyone posted about the progress of the project, the storms we are sampling and the experiences we’re having as we try to keep up with onslaught of storm systems from the Pacific Ocean.