The air in Ny-Ålesund is thick with memory. There are no trees here, marking the years with their rings, only the endlessly accreted layers of ice in the glaciers. Most of the long history of Ny-Ålesund is written only in the rocks and the snow, an enigma that only slowly yields to the Rosetta stones of ice cores, rock drills, and mass spectrometers. 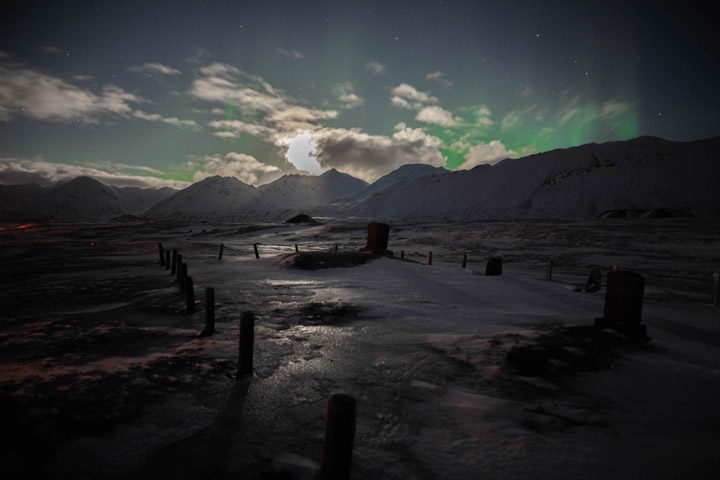 Aurora and moonlight over a Ny-Ålesund gravesite. Credit: Chris Pirner

But this is also a human place. In the last hundred years many have visited, many have lived, and some remain, in their final rest. Photographs hang near the foosball table, showing residents from a different time, resplendent in formal attire as they dine at tables set out on the snow, celebrating the return of the Sun. The styles change, but there is one constant — the spirit of adventure, of an impulse to explore; to live at the edge of the world and to go beyond. The same spirit that moves us and brings us here for our mission.

The Ny-Ålesund museum celebrates the lives of the coal miners and their families who first made this place their home one hundred years ago. They came for the rich coal seams lining the Kongsfjord — rich but dangerous. The nearly vertical seams tend to trap deadly methane gas, and many miners were lost in a series of explosions and accidents. Their spirits live on here — they and their families made this place. They carved it out of the tundra and rock, built the harbor and the houses and the airport. Without them there would be no town here, no research, and no rockets. We fly in honor of them and their courage, to make a living in this place, far from home.

Ny-Ålesund, 1928 – In the foreground you can see the town, and in the background, the mines and airship. Between 1916 and 1963, 82 coal miners lost their lives due to the dangerous conditions in the mine, including the buildup of deadly methane gas that was prone to explode. Now the mines are closed, and the town is focused on scientific research. Credit: Svalbard Museum

The polar explorers of the early 20th century recognized the value of Ny-Ålesund as a base, for the same reasons we come here — the safe harbor, the mild climate, and the solid land, last before the sea ice over the Pole. Umberto Nobile and Roald Amundsen and their crews took flight from Ny-Ålesund in May 1926, in the airship Norge. This zeppelin was the first vessel of any kind to reach the North Pole, and is celebrated here with many photographs. It is memorialized in the name of the Zeppelinobservatoriet, the high-altitude atmospheric monitoring station on Zeppelinfjellet, the mountain that rises 556 meters above town. While the Norgewas successful, the sister ship Italia, captained by Nobile in 1928 met a tragic end. On its return from the pole, it crashed into the ice north of Svalbard. Though many were rescued, 17 crew and rescuers died in the attempt, including Amundsen, whose plane crashed at sea as he flew to help. We fly to celebrate these airmen, and their thirst for knowledge and exploration.

The airship Norge, captained by Roald Amundsen and Umberto Nobile, as it prepared for launch from Ny-Ålesund on its way for the first overflight of the North Pole in May 1926. Its sister ship Italia crashed in May 1928 on its return from the Pole, with 17 fatalities among crew and rescuers, including Roald Amundsen who had flown his plane to help in the rescue. Credit: Nasjonalbiblioteket, CC-BY-2.0, via WikiMedia Commons

The researchers and Kings Bay staff who come here to work and live, some for months, and some for years, keep this town and all its facilities running. They work long hours each day and pour their hearts and spirits into Ny-Ålesund to make it a warm place. A place of community and curiosity. A place where you are just as likely to spend Friday night at a scientific lecture or watching a chess match as at a karaoke party or playing “bandy” which is like indoor hockey. Many of them go months or longer without seeing family, and have only the occasional trip home to break the long months of winter night. Nonetheless, they are professional, cheerful, and inclusive, making us feel welcome and at home. They worked to build the second launch pad that we need for our mission, laboring to bring the concrete and the rebar and the tools that could only be used for a brief warm period in the summer when the permafrost had thawed sufficiently. They worked to give us a beautiful Thanksgiving meal which was a welcome taste of home. They work every day to keep us warm, well fed, and safe, and to support our mission. The watchman, who patrols for polar bears, the electrician, who keeps the power plant and heat running, the technical manager and the reception staff who keep the hotel, dorms, and logistics running smoothly. The kitchen staff who work seven days a week to provide for us. All are here because they choose it — no one these days is born in Ny-Ålesund. We are all visitors here. But these long-term residents make the rest of us short-timers feel like we belong. We fly in thankfulness for their support and their welcome.

Thanksgiving dinner, which we enjoyed Saturday, Nov. 24. The Kings Bay staff pulled off an amazing and heart-warming meal, with all the American favorites – mashed potatoes, sweet potatoes (which the Norwegians were sure was meant for dessert). Glenn Maxfield, from the NSROC crew, coordinated to make sure the turkeys were in the sea shipment that left several months ago, in order to be ready for this meal. NASA family and friends also provided many of the recipes, which made it feel like home. Foreground, from left: Mark Frese, Norman Morris, Tim Wilson. Credit: NASA 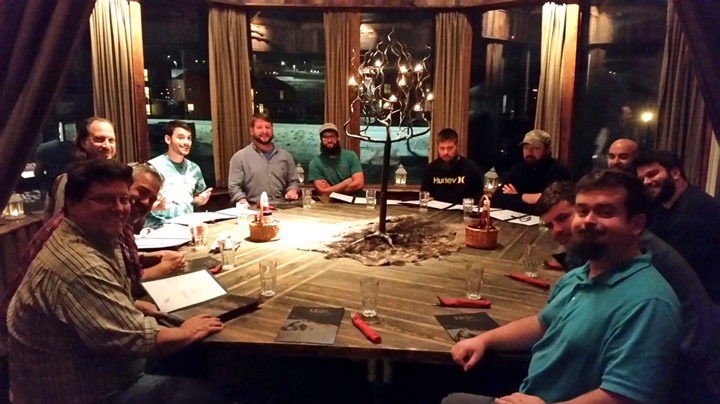 Our team shares the spirit of the men and women who have called Ny-Ålesund their home before us. We come from all over, to this place, in the spirit of adventure. We are far from home, too, and we are living at the extremes to accomplish our goals. We come from NASA, from Andøya, from Oslo, from Bergen, from Longyearbyen, from Canada, from our university and industry partners. We bring that same sense of community and drive to achieve that those before us have brought since the first NASA sounding rockets were launched here in 1997, and back to Ny-Ålesund’s founding in 1917. We fly to honor the sacrifices that we each have made, and the dedication we all feel to each other, in our three-year journey from project inception to field campaign. 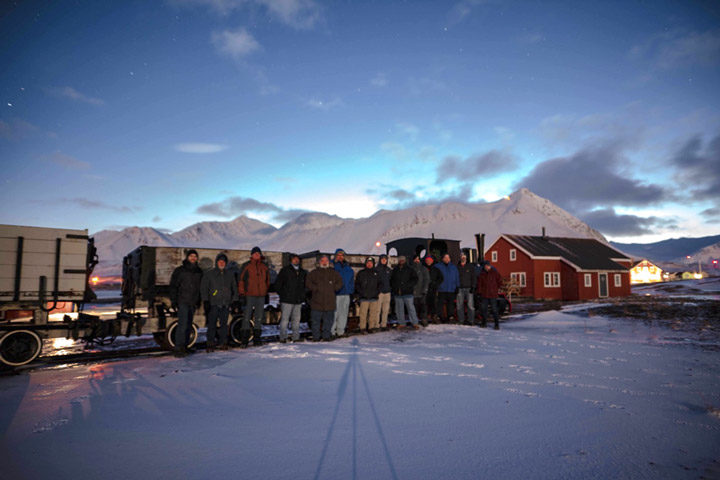 But there are those who could not be with us for this journey. Even in the midst of our joy, we have lost loved ones. Kelly Pham Nguyen, Alvaro Uribe, John Rowland, and Bernita Justis. We fly in their memory, as their spirits lift us high.

The memorial plaque for Bernita Justis. Both VISIONS-2 payloads carry this plaque, to honor her memory and the 31 years she dedicated to building and launching sounding rockets all over the world. Bernita passed this summer, in the middle of integrating the payloads for the Grand Challenge missions. Even in her last moments, she was hardworking, dedicated, cheerful, and positive. We fly in her memory. Credit: Doug Rowland

This entry was posted on Monday, November 26th, 2018 at 5:03 pm and is filed under VISIONS-2: Imaging Earth’s Portal to Space. You can follow any responses to this entry through the RSS 2.0 feed. Both comments and pings are currently closed.