I usually hate putting in earplugs, but the roar of the P-3 plane makes me get over my aversion quickly. We’re a little less than an hour away from take-off, and people are moving from the hangers that are serving as our base of operations at Walvis Bay Airport to the aircraft. Before joining them, one other graduate student and I have to complete a short safety briefing — for both of us, this will be our first journey on the P-3.

I’m currently finishing up my first year as a graduate student in the Department of Atmospheric Sciences at the University of Washington, Seattle. My advisor, Professor Rob Wood, is the deputy principal investigator of ORACLES, and beyond helping him out in the field, my role will be using the data we collect to better understand the interaction between smoke and cloud particles over the southeast Atlantic. 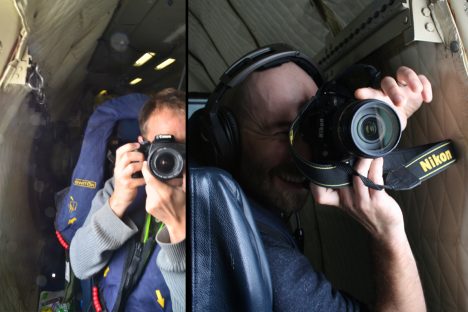 Me (Michael Diamond) and Sam LeBlanc (a scientist working at the NASA Ames sun photometer instrument group) taking dueling photos from aboard the P3. Photo credit: Sam LeBlanc and Michael Diamond. You can guess in which order 🙂

After safety training is complete, we’re able to board the plane. There are no beverage carts, movies, or reclining seats on this flight, but we do have some other perks. We have a microwave and — in my opinion more importantly — a coffeemaker in the back of the plane. There are screens, but instead of showing Zootopia or season 3 of Friends, these show the data our instruments are collecting and have various controls depending on the instrument. Racks of instrument machinery take the place of some rows of seats. We even have a version of in-flight WiFi, although this version has a somewhat more limited offering: forward and nadir (directly below the plane) cameras, a few live-streams of the data being collected, some satellite images, and the flight map. 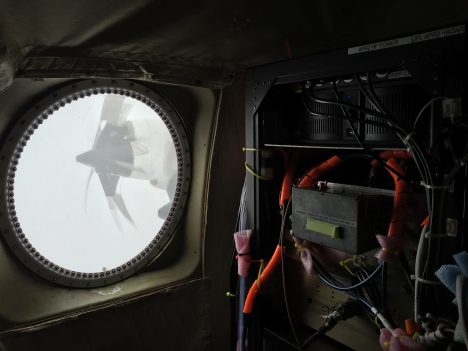 One of the instruments aboard the P-3 with the P-3’s propeller visible out the window. Photo credit: Michael Diamond

This will technically be our second official science flight of the ORACLES campaign, although some people have been calling it “1b” because the first flight had to turn around early due to a mechanical issue. Conditions are fairly good for flying today, with the caveat that there are some mid-level “altocumulus” clouds in our flight path. The “cartoon” version of the system we’re studying would be uniform, low-level stratocumulus clouds (incredibly long expanses of relatively thin, fluffy clouds) overlain by a layer of smoke produced from fires in central Africa and lofted over the Atlantic Ocean by the prevailing wind patterns. This stratocumulus deck reflects a lot of sunlight during the day and thus plays an important role in cooling Earth’s climate, which is why it’s so important to understand how the clouds are affected by largely man-made fires. The mid-level clouds add another wrinkle to this already complex system. 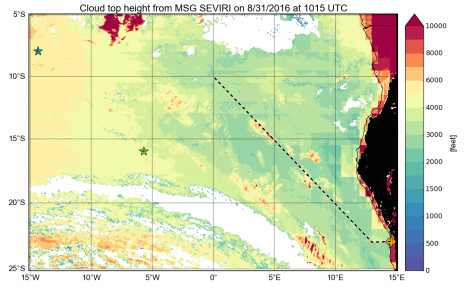 Map of the southeast Atlantic and coastal west Africa with our flight track marked in black/white dashes. The mid-level clouds can be seen in the satellite-estimated cloud top heights as the yellow-to-red colors around 5° East and 15° degrees South. Walvis Bay, our starting point, is marked as the orange diamond. 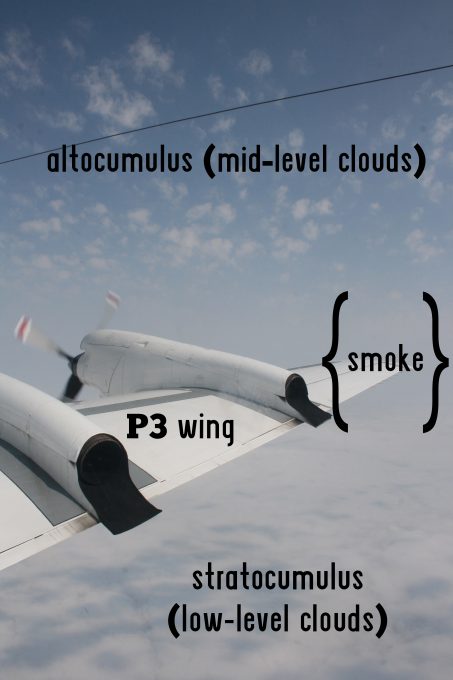 Schematic from outside the P-3 window of mid-level clouds, the smoke layer, and the low-level stratocumulus clouds. Credit: Michael Diamond

In addition to flying over the stratocumulus clouds, we also fly through and below them to take advantage of the unique capabilities of each of the P-3 instruments and to study the marine boundary layer, which is an atmospheric science term referring to the shallow, extremely well-mixed layer of air just over the ocean and topped by the stratocumulus clouds. As anyone who’s been on a commercial airliner can attest, cloud layers are turbulent, and the marine boundary layer is also very turbulent, so this can lead to a rather bumpy ride. 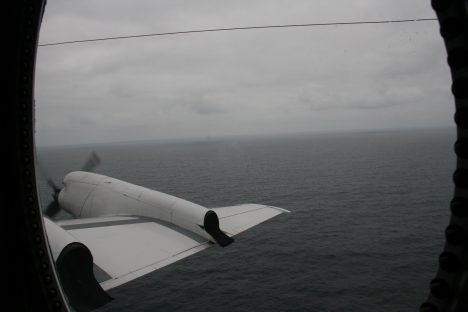 View of the marine boundary layer with stratocumulus clouds above and the Atlantic Ocean below from outside the P-3 window. Photo credit: Michael Diamond

Despite getting a bit high-altitude-over-sea sick, I enjoyed my first flight on the P-3, and the initial indication is that we collected some high-quality data. If September’s flights are as successful as flight “1b,” we’ll be coming back with a ton of great climate information. And then comes the hardest part: analyzing all that data!

This entry was posted on Wednesday, September 7th, 2016 at 11:40 am and is filed under ORACLES. You can follow any responses to this entry through the RSS 2.0 feed. Both comments and pings are currently closed.