Mathematicians from the 18th Century 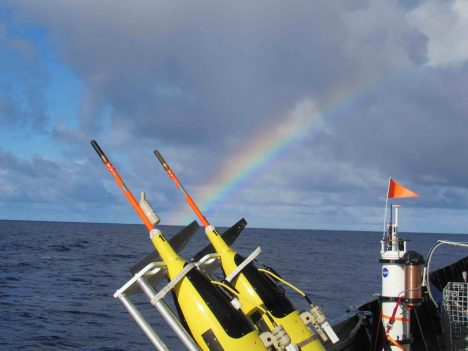 Instruments ready for Lagrangian array deployment at the end of the rainbow.

What do Leonhard Euler (1707-1783) and Joseph-Louis Lagrange (1736-1813)  have to do with SPURS-2? How do we have two experiments going on simultaneously honoring the work of these famous mathematicians?

Two frames of reference have taken their names from these 18th century mathematicians. In science, including oceanography, when we make measurements of fluid flows fixed in space, we watch properties such as temperature or salinity as currents carry them by our instruments. This is called an Eulerian frame of reference. However, sometimes we make measurements while following the flow, trying to tag a parcel of water and watch as it moves and changes over time. This water following perspective is called the Lagrangian frame of reference. For example if you watch a river flow past from the bank, you are using an Eulerian frame of reference. If you examine the river from a boat flowing with river, you would be making a Lagrangian observation of the river.

In SPURS-2 we use moorings and a fixed grid of stations to describe a patch of ocean as the water passes by. Moorings, stations, and satellites provide the Eulerian perspective over the year of SPURS-2. We use a variety of drifters, autonomous vehicles, and profilers (instruments embedded in the moving water parcels) to also build an extensive Lagrangian view of the ocean over the year. We use the Lady Amber over the course of the year to service and reset some of the Lagrangian experiment as those assets drift away from the study site. We use the Revelle to deploy the Eulerian array and to seed the ocean with the Lagrangian instruments to be tended at later times by Lady Amber. It really is two experiments united to understand the salinity patterns and movement of freshwater in the ocean! 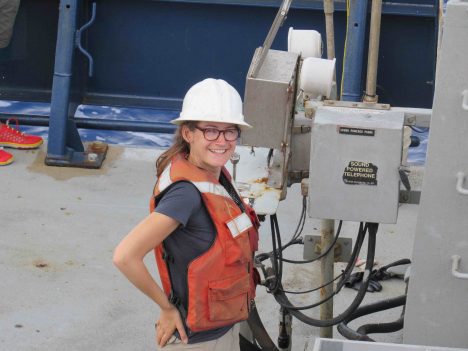 During the Revelle voyage we are also planning a short-term (48-72 hour) Lagrangian experiment capture the processes by which rainwater mixes into the ocean. We will launch drifters specially designed to follow the surface current during a rain event and then follow them for day or two. We will sample the region around the drifters using the Revelle to further examine the changing temperature and salinity properties of the upper ocean. The Revelle will attempt to take several snapshots of the ocean conditions as the Lagrangian array disperses over a day.

Together our Lagrangian and Eulerian sensor arrays constitute a sensor web in the ocean. This sensor web captures ocean motion and salinity changes (particularly) on a wide range of time and space scales. This allows us to analyze processes that lead to changing surface salinity all the way from minutes to seasons and from millimeter size turbulence to major ocean currents. We cannot measure all things we would like all the time and in every place, so we have tuned our effort and sensor web design to provide enough information to estimate what we would like to know. We would like to know about the role of turbulent mixing at the surface; we would like to know the role of eddies in transport of freshwater; and we would like to know how the major equatorial currents impact the eastern tropical Pacific low salinity pool. Obtaining such knowledge of the ocean is ambitious and challenging. SPURS-2 is giving us a shot at providing some unprecedented new knowledge.

I would like to give a shout out to our chief scientist on the voyage, Andy Jessup, from the University of Washington Applied Physics Laboratory. Andy has demonstrated extreme patience and diligence to his duty to represent the many investigators working on diverse problems and scales in SPURS-2. He has a team from APL aboard with a complex set of measurements to execute. He balances the time devoted to his own science project and his duties as leader of all the projects represented on the ship. That is not easy and he has found a way to give everyone a voice.

I hope to devote some upcoming blog time to our able CTD crew from Scripps led by Janet Sprintall, the ocean currents in our region in general, and the interaction with the teams back home as seen through the eyes of Audrey Hasson.

Please feel free to send questions and comments on the blog. I’ll do my best to answer all fair questions!

This entry was posted on Friday, August 26th, 2016 at 4:26 pm and is filed under Salinity Processes in the Upper Ocean Regional Study (SPURS). You can follow any responses to this entry through the RSS 2.0 feed. Both comments and pings are currently closed.