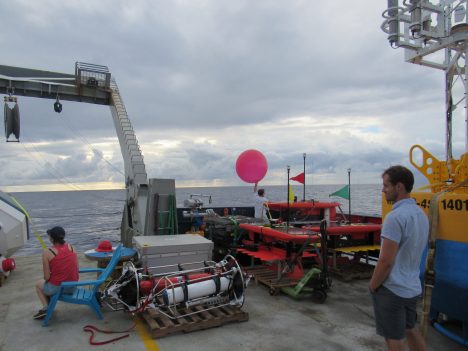 Launching a balloon from the R/V Revellle, for atmospheric sounding.

As I mentioned in a previous blog post, the R/V Revelle is bristling with meteorological sensors. Some are permanently installed aboard, some are just for SPURS-2, and some are on the moorings we will deploy. Raymond Graham, a graduate student at University of Connecticut, did a quick count of meteorological sensors and we were amazed to find out that on a ship of less than 300 feet we had deployed eight wind sensors, 16 air temperature probes, 15 humidity sensors, 15 rain gauges, 11 radiometers, and four barometric pressure sensors! The reason for the overkill is the critical nature of meteorology for our work and the difficulty of obtaining clean data from the ship. Wind and rain especially are notoriously difficult to sample because of flow distortions or shadowing around the ship. By deploying gear at a number of locations (bow, stern, bridge deck, etc.), we will more likely collect clean data no matter which direction the ship is headed relative to the wind. During analysis of the data, one ideal time series of ship data can be assembled from the numerous sensors based on ship heading and true wind direction. 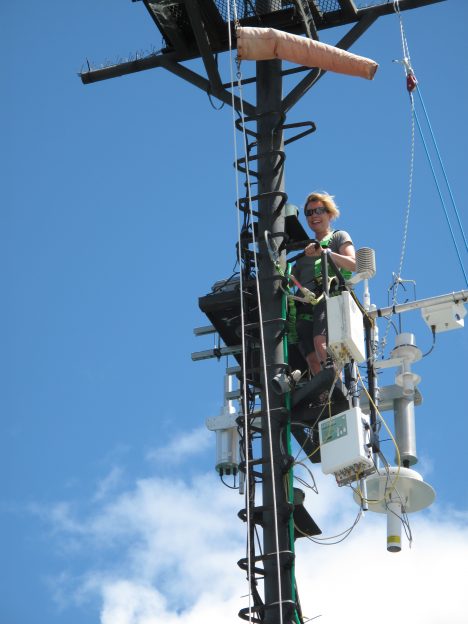 Carol Anne Clayson at work on the bow mast.

For SPURS-2, a group from Woods Hole Oceanographic Institution led by Carol Anne Clayson and a group from University of Connecticut led by Jim Edson are gathering state-of-the-art measurements of key meteorological variables. They will estimate the transfers of heat, freshwater, and momentum between atmosphere and ocean. Today, for example, Jim Edson launched the first of their balloons for atmospheric sounding. The balloon carries a small expendable package that transmits temperature, humidity, and pressure data until the balloon pops in the upper atmosphere. 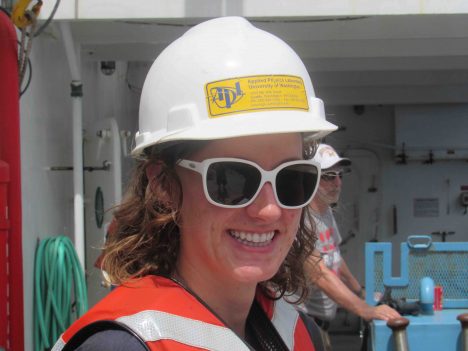 Elizabeth Thompson from the University of Washington’s Applied Physics Lab.

Elizabeth Thompson from the University of Washington’s Applied Physics Laboratory is also working the meteorological angles for SPURS-2 by providing the daily meteorological briefings and analysis of radar data (to help us track rain events). She and Audrey Hasson are providing daily briefings at 4 pm to apprise us of the weather and oceanographic conditions to be encountered over the next day of operations. For the moment they are practicing and perfecting the best information and products to utilize and share. Prediction sure is an activity to sharpen a scientist’s skills! 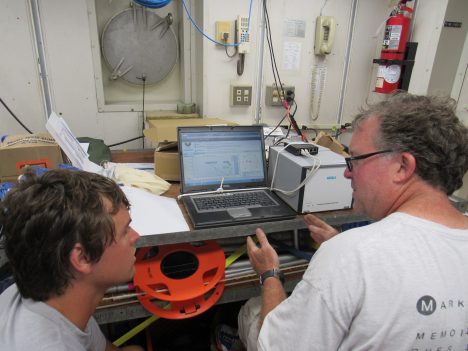 Jim Edson from University of Connecticut and Raymond Graham, a graduate student at U.Conn., looking over the first results from the balloon deployment.

While much of the time aboard Revelle is focused on oceanographic measurements, the meteorology is key to synthesis of the overall story of SPURS. In the end we will want to assess the ocean response to forcing – whether in the form of rain, wind, or sun’s radiation. It is quite difficult to tell the story of the near surface ocean without understanding how it is interacting with the atmosphere. Likewise, it is quite difficult to tell the story of the evolving atmosphere without understanding how it interacts with the ocean. This coupled system is an especially powerful engine for Earth’s climate here in the tropics. The warmer the ocean and atmosphere, the more energy in the form of water vapor is exchanged. Hurricanes are a good example of this interaction and exchange – and a reason to worry about stronger or more frequent hurricanes in a warmer world. Air sea exchange is very sensitive and very powerful when ocean waters are greater than about 83 degrees Fahrenheit (28.5 degrees Celsius) as is found in the deep tropics and here in the Intertropical Convergence Zone.

This entry was posted on Monday, August 22nd, 2016 at 10:06 am and is filed under Salinity Processes in the Upper Ocean Regional Study (SPURS). You can follow any responses to this entry through the RSS 2.0 feed. Both comments and pings are currently closed.