Our entire team left Greenland in the last week or so and I am writing this blog post from a warm place. In this post, I will describe the additional measurements taken by the team and show a few photos to illustrate how these data were taken. As reminder, the seismic data collection was explained by Lynn here, and hydrologic measurements described by Olivia in the previous post. Here, we will present the ground-penetrating radar collection, the magnetic resonance soundings, the intelligent weather station set up, and the monitoring of the firn temperature and water-table level.

The ground-penetrating radar (GPR) was used first to decide where to extract the firn cores, do the hydrological tests, and set up magnetic soundings and seismic surveys. During the first days of the fieldwork, we did not have the snowmobile on site, so we made a small sled with a piece of foam that we could drag. It had the advantage on being light and fast to set up. 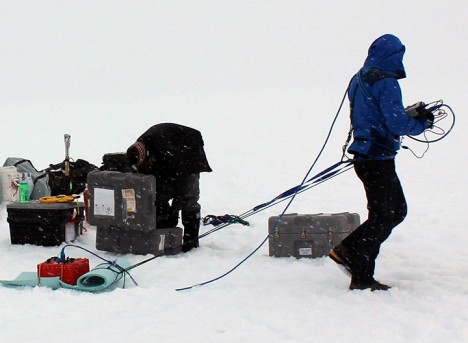 The GPR profile allows us to derive the depth of the water table below the snow surface. The water table corresponds to the top of the firn aquifer and is represented in the GPR data by a bright internal horizon (see GPR profile on photo 2, bottom part). In the summer time, we expected the wet firn above the aquifer to prevent the electromagnetic signal from penetrating to the water table but we were still able to image the water table. However, the correction from two-way-travel time to depth will need to take into account the presence of near surface water as it slows down the electromagnetic signal. To determine the water-table depth and adjust our dielectrical model, the magnetic resonance soundings will be important as it provide a direct measurement of the water volume. 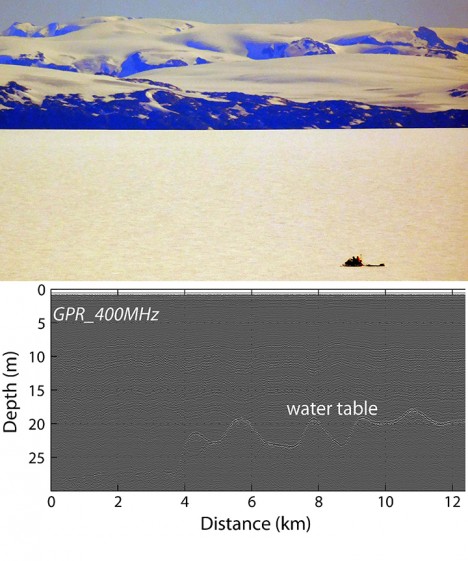 GPR survey on the snowmobile with the mountains at the background (Photo Credit: Nick Schmerr). At the bottom, example of GPR profile collected above the water table (Miège et al., 2015, JGR in review). The bright reflector represents the water table.

Magnetic resonance sounding (MRS) is a non-invasive technique which captures the magnetic resonance signal generated only by water molecules in the subsurface. Anatoly, a researcher from LTHE in Grenoble (FR), accepted our invitation to use his instrument over the Greenland firn aquifer. After successful initial testing in the spring, we performed several additional soundings this summer. The setup consists in a square loop about 80m long, made of wire. At one corner of the loop, all the instruments are hooked up, powered with 12V batteries. 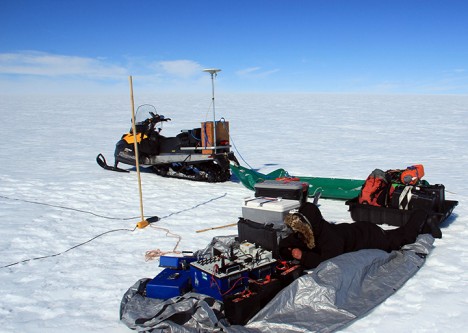 Anatoly is laying on a tarp finishing connecting the wires to the instruments. The bamboo stick marks one corner of the loop. 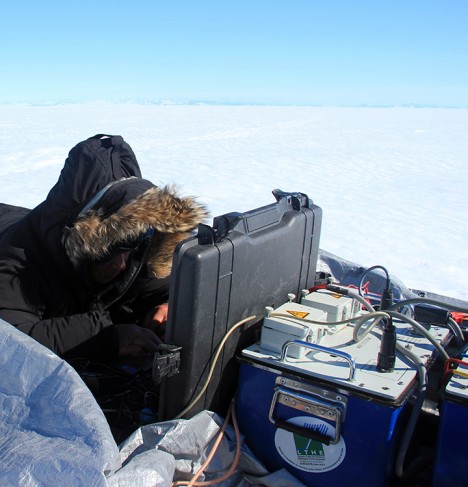 One MRS takes about 1 hour to setup including walking the wire for installing the square loop. The measurement takes between 2 and 3 hours, it is always a good idea to go back to the tent for a hot drink in the meantime.

The last part of this fieldwork was to set up sensors to monitor the surface conditions on the ice sheet as well as the shallow subsurface (snow and firn) throughout the year, when we are not in the field. First, we moved the intelligent weather station (iWS) to a new location, about 20 km north. This iWS was initially installed in the spring of 2014 and we decided to move it at the new fieldwork location located directly upstream of Helheim Glacier. 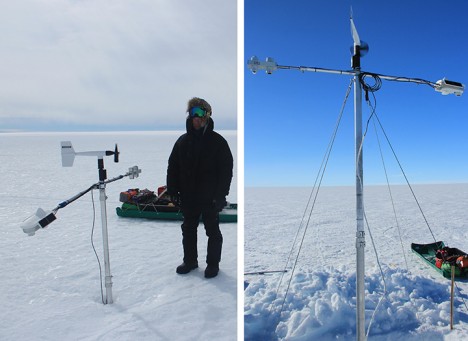 iWS developed by our colleagues from the University of Utrecht in the Netherlands. On the left, iWS at the old location and on the right, the iWS left at its new location.

To look at the firn and water thermal properties we also installed a string of 50 temperature sensors from the surface to the top of the aquifer, within the aquifer, and beyond in the ice. We also dropped a pressure sensor to measure the vertical fluctuations of the water table from the snow surface. Finally, we had the chance to use one of the compaction devices designed by our colleagues from the University of Colorado. The Colorado team is setting up the largest snow/firn compaction network on the Greenland ice sheet. If you are interested to know more about their work, follow this link. The compaction device consists of a wire with one end anchored at depth in the firn. The other end of the wire, located at the surface, reels back on a spool as the surface is lowering with snow being compacted.

iWS standing next to the firn and water level logging station with our snowmobile in between for scale.

One of the logging stations was set up in April this year, and surprise, we got some visitors! They left us a note in the logging station case. It was a fun and unexpected moment as visitors are very rare on the ice sheet. Also it would be difficult to spot such a tiny station unless you go right by it, due to the surface undulations. These visitors are researchers from the University of Berlin, Germany. They are crossing the ice sheet between Tasiilaq and Ilulissat, repeating a route that a Swiss explorer, Alfred de Quervain, took in 1912.

Hi to them, and best of luck in their crossing! If you are interested to know more of their adventure, they left us their website link.

That is all for this blog post, stay tuned because we’ll send one last post for this summer season to wrap up and show more photos.

This entry was posted on Tuesday, September 1st, 2015 at 11:59 am and is filed under Greenland Aquifer Expedition. You can follow any responses to this entry through the RSS 2.0 feed. Both comments and pings are currently closed.