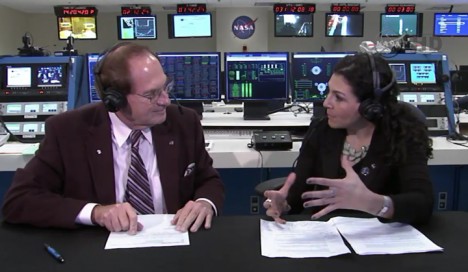 Two hours before SMAP’s early morning launch Saturday, Vanessa Escobar was on NASA TV, explaining a new effort to link the soil-moisture-measuring satellite with the people who will put it to use.

It’s called an ‘Early Adopter’ program – and it lets interested companies and agencies, from John Deere to the National Oceanographic and Atmospheric Association, take simulated SMAP data and develop the tools and computer programs to interpret it. With these tools and programs in hand, SMAP’s 45 Early Adopters will be ready to grab the satellite’s data as soon as it’s processed to help improve flood warning systems, forecast crop yields, better predict droughts, understand dust storms and more.

“It’s fantastic science, and through the early adopters the science is getting to the users,” said Escobar, an applications scientist at NASA’s Goddard Space Flight Center.

SMAP is the first NASA mission with an Early Adopter program. The mission’s science team has been driven to find ways in which the soil moisture data could be used to benefit people and communities, she said.

And so from an early point, Escobar and her colleagues reached out to people and groups who could use information about the soil’s water content. They started with some of the more obvious groups – agriculture researchers, weather forecasters – SMAP’s “close friends,” she noted. But as word of the program spread, others became interested as well: The public health scientist in the American Southwest concerned with respiratory impacts of dust storms, for example, or scientists interested in mapping sea ice with the satellite’s capability of determining whether a surface is frozen.

With their early access to simulated data sets and time to develop the tools to use them, those adopters are ready.

In the next couple months, after SMAP completes its check-out phase, “the job changes, it goes from simulated data to real data,” she said. “We keep working with the early adopters, we keep communicating with them, and instead of talking about the methods to use the SMAP data, we’ll talk about the impacts, and the societal benefits.”

This entry was posted on Saturday, January 31st, 2015 at 3:26 pm and is filed under Soil Moisture Active Passive (SMAP). You can follow any responses to this entry through the RSS 2.0 feed. Both comments and pings are currently closed.