The dark blue in this image is a lead, or opening in sea ice. If you look closely you can see where the lead is starting to refreeze at the edges. Credit: NASA

Flying above, below and through clouds in the Arctic gives the ARISE C-130 a different perspective on the world below. Nowhere is this more apparent than through the lenses of ARISE’s digital camera instrument. This instrument – one of many   ARISE uses – captures views of clouds, ocean and ice that are both scenic and scientifically important.

The heart of the digital camera instrument would look familiar to a casual observer. It is made up of two off-the-shelf digital cameras that point down through a clear window in the underside of the aircraft. These cameras are connected to a computer with software that allows the operator to preview images and change camera settings and to a hard drive for storing photographs. An average ARISE flight yields roughly 100 gigabytes of images.

Although the cameras are the same make and model, their lenses are different. Group photos and distant landscape shots call for different size lenses, and low-altitude and high-altitude flights do the same. One camera has a 14 millimeter, wide-angle lens to capture views of the surface during low-level flights. The other camera’s lens has a 50 millimeter focal length, making it useful higher up. 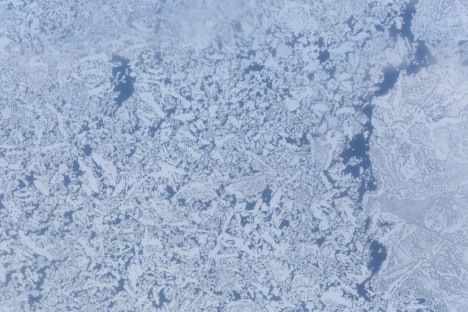 A collection of broken sea ice pieces floating together. Far from static, sea ice moves, flexes and breaks under the strain of winds and ocean currents. Credit: NASA

Similarly, the rate at which the shutters snap ranges between one per second to roughly one every three seconds. From high up the surface seems to pass slower than at low altitude, much like the way telephone poles beside the highway are a blur while far away mountains barely seem to move. Instrument operators can fine-tune this rate to best match the situation and can be managed in flight.

While many of the images these cameras capture are breathtaking, they are also useful in several ways. Researchers can use them to measure how much light is reflected from clouds and ice, also known as albedo. The images also show where there are leads, or openings, in sea ice. ARISE measures ice surface height using the Land, Vegetation and Ice Sensor, which bounces a laser off of the surface and times how long it takes to return to the plane. Locating leads gives scientists a reference for local sea level, helping ensure that measurements are accurate.

Larger chunks of sea ice, some with melt ponds on the surface. Credit: NASA

Laser altimeters and other instruments can reveal a great deal about the surface, but through photographs the variety of conditions ranging from open stretches of water to broken bits of floating ice to solid white expanses. The images captured by these cameras benefit researchers studying sea ice, but the views can also be breathtaking.

This entry was posted on Wednesday, September 24th, 2014 at 11:09 am and is filed under NASA in Alaska. You can follow any responses to this entry through the RSS 2.0 feed. Both comments and pings are currently closed.