Editor’s note: The following is a first-hand account of ARISE survey flights by one of the mission’s researchers.

Above the clouds on NASA’s C-130 during an ARISE survey flight. Credit: NASA / Michal Segal Rozenhaimer

My first ARISE day started early in the morning after a late arrival into Fairbanks on the night before. This important mission’s goal is to map the sea ice and understand the relation between the complex cloud scene over the Arctic, the sea ice and Earth’s radiation budget,the balance between incoming and outgoing sunlight and infrared.

After arriving on base and seeing our instrument (4STAR) on the plane, I am ready to go out there, realizing again that since I am with NASA I get this great opportunity not only to analyze data as many scientists do, but to actually take part in generating this important dataset.

After initial preparations like getting used to the noise on the planeand figuring out how to buckle myself in (none of my degrees were proven useful in this case) we took off to the northern parts of our planet. From this big bird’s view, cutting through various cloud deck formations, seeing land cover, ocean and ice I suddenly grasp the immense variability of this region and how we, as a mobile platform, can bridge satellites and ground measurements by going above, in and below clouds. Yes, as is probably obvious from my text and images, I am interested in clouds!

The 4STAR instrument can measure clouds from below, and can also look at the sun and characterize the thin cloud wisps surrounding the sun in this third image. Harmless as they seem, these cirrus (which means a curling lock of hair in Latin) clouds are hard to detect from space and have a large effect on warming/cooling of our planet.

After a seven hour flight it is time to land and think about the next flight.

My second ARISE flight day started with lots of adrenaline and excitement. We would fly low over the sea-ice sheets!
Some regions are broken, with small water lakes in between and some are rock-solid.

Flying so low over the sea-ice makes me wonder whether I’ll be able to detect a polar bear out there.

The views are so awe-inspiring that I am practically out of words or breathe. After eight hours above these amazing surfaces, with some roller-coaster ups and downs, we are back on the ground, and I am with a big smile that will last for many more hours after that. 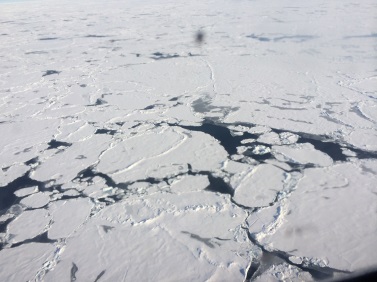 This entry was posted on Wednesday, September 17th, 2014 at 11:26 am and is filed under NASA in Alaska. You can follow any responses to this entry through the RSS 2.0 feed. Both comments and pings are currently closed.