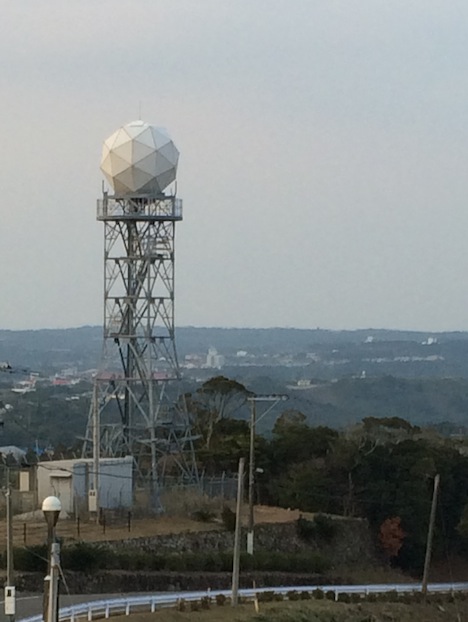 I hear it was snowing in Maryland last night/today. In my inbox this evening (East Coast morning), I got the boilerplate message that while Goddard Space Flight Center is open on Feb. 26, non-critical and non-emergency personal could telework or take leave to avoid the snowy roads. The GPM team members scheduled to be on console for Thursday’s launch of the Global Precipitation Measurement Core Observatory are definitely critical.

As I write this in Tanegashima, I’ve been listening to a rainstorm blow across the island. Earlier, the wind was so loud outside of the Spacecraft Test and Assembly building where the GPM project offices are that Michael Starobin and I were worried about driving back to the hotel. The roads are narrow and twisty, which is bad enough after dark when we have drive on the opposite side of the road than we do in the States. Fortunately, when we walked outside the heavy rain we feared hadn’t hit yet, but the wind was wind you lean into.

Weather is one of the deciding factors for when a launch actually happens. It’s also the most fickle. Today, the first launch weather report was issued at Tanegashima Space Center at the Launch Readiness Review, the last major review panel of NASA and JAXA officials who gave GPM a go for launch on Feb. 28 (Feb. 27 in the U.S.) with an updated launch window beginning at 3:37 a.m. (1:37 p.m. EST).

Despite the rain here, the weather forecast for liftoff looks good. From the official update: “Weather at T-0 is forecast to be some scattered clouds with light winds, neither of which are expected to affect launch. Winds at launch are forecast to be 13 mph (violation is 47 mph).”

In about 28 hours, we’ll be watching a relatively clear night sky light up.

For those following along at home, live coverage of launch will begin at 12 noon EST on NASA TV. You can watch streaming online at: http://www.nasa.gov/nasatv

This entry was posted on Wednesday, February 26th, 2014 at 10:24 am and is filed under GPM in Japan, the Road to Launch, Siberia 2012 – Embenchime River Expedition. You can follow any responses to this entry through the RSS 2.0 feed. Both comments and pings are currently closed.