Blessings for a Safe and Successful Mission 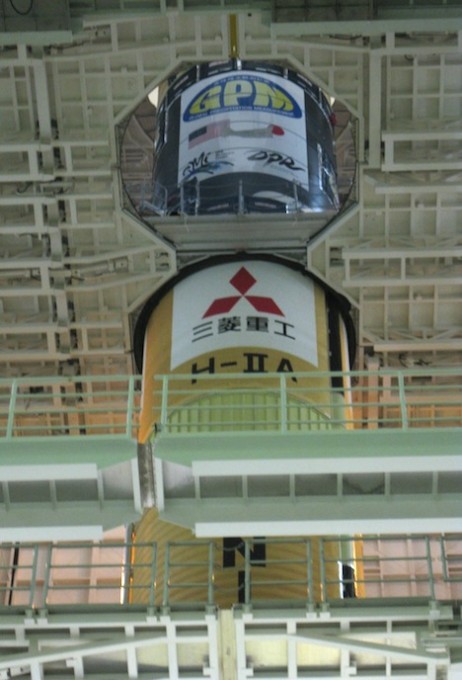 The H-IIA rocket that will carry the GPM Core Observatory into space. Here you can see the orange first stage and the silver second stage with the GPM logo on it. Jan. 20, Tanegashima Space Center. Credit: Mitsubishi Heavy Industries

The H-IIA No. 23 rocket that will carry the GPM Core Observatory into space arrived at Tanegashima Space Center on Jan. 20, 2014. The rocket has two stages, a lower first stage that, with the help of two solid rocket boosters, gets it off the ground, and an upper second stage that lights up a few minutes after launch to boost the satellite the rest of the way into orbit. The launch services provider, Mitsubishi Heavy Industries (MHI), immediately began assembling the rocket. On Jan. 22, the GPM team in Tanegashima was invited to participate in a blessing ceremony for the rocket. Lynette Marbley, the Instruments Chief Safety and Mission Assurance Officer for GPM, represented the NASA team.

She wrote to me about her experience. Her responses have been lightly edited for clarity.

Where did the ceremony take place?

The ceremony took place in the Vertical Assembly Building (VAB) at the foot of the rocket as it sits in the platform.

What did the space that the ceremony took place in look like?

I was amazed to see that they had already placed the upper stage onto the lower stage considering it had been less than 48 hours since its arrival. As I looked up to try and see the top of the rocket, I could see the large GPM logo on the upper stage. It was wonderful to see that logo! The work platform that surrounded the rocket was maybe 15 floors tall. I couldn’t see the top of the rocket. The space where we had the ceremony reminded me of the Goddard High Bay in the Building 29/7 complex, except it was taller.

To give you a sense of size, the rocket is about 15 stories tall. Jan 20. Credit: Mitsubishi Heavy Industries

What happened during the ceremony?

When we arrived, a wooden altar was in place in front of the rocket, and two potted trees were on either side of the altar. There were fruits and vegetables already on the altar and some shrubbery with paper tied to it. Next to the altar was a table that had several large bottles of what I believe is the local potato wine called sochu, a large tree branch with paper tied to it, and several smaller branches.

Two rows of chairs were set up several feet in front of the altar with open space behind them. Every company that has a role in this launch had two representatives sit in the chairs. I had an MHI employee sitting behind me to help me through the ceremony. The remaining GPM team members were lined up behind the chairs. I had two lines of GPM folks standing behind me, about 25-30 people per line and by far the biggest group amongst all the companies. JAXA, MHI, NASA, KHI (Kawasaki Heavy Industries), and IHI Aerospace were represented.

The Shinto shrine set up at the base of the rocket and the kannushi, or priest, who led the ceremony. Jan 20, 2014. Credit: Mitsubishi Heavy Industries

The Shinto priest was busy preparing for the ceremony and donned his robes to start. As we all took our places in the chairs, we started out standing. The announcer spoke only Japanese and made some opening remarks. The priest was introduced, and the company representatives all had to bow in unison at the start of the ceremony.

The ceremony was broken into several sections with the Shinto priest doing a lot of chanting approaching the altar, bowing, and shaking the large branch in front of the altar and over his shoulders. The room was very quiet. We mostly stood and bowed during certain segments and at other times we sat. His voice was very deep and had a vibrating sound. At one point, he read from a script and I heard the words “GPM” and “rocket” several times. He also mentioned every company in the prayer.

I understand you had an active role — what did you get to do?

[I participated in] the Tamagushi-houten portion of the ceremony.

Excerpt from the information packet given to the team before the ceremony. The Tamagushi-houten midway through the ceremony. First the priest cleansed the attendees of evils and invited the god to the alter where he made a sacrifice of food. Then he prayed for the safety of the launch campaign and mission success. Next he blessed the facilities. Then it was time for the Tamagushi-houten when the attendees offer their pure spirits to the god. Finally, the priest withdraws the sacrifice of food and send off the god, and all present bow. Jan 20, 2014. Source: Info provided by MHI

I practiced for several days, and I even looked it up on YouTube to see if I could get a better visual of what to do, which was helpful. I basically took the offering branch from the priest in a specific way and placed it on the altar. After placing it on the alter, I and all NASA team members had to bow twice, clap twice, and bow one more time. I then proceeded back to my seat. 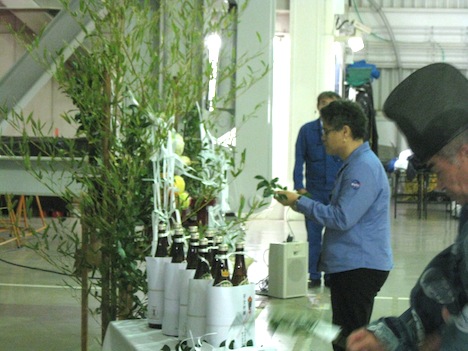 Lynette Marbley placing the offering of Sakaki-tree sprigs on the alter during the blessing ceremony. Jan 20. Credit: Mitsubishi Heavy Indutries

It was very quiet and very serious and somber. Everyone was careful not to make a sound. As I looked at other representatives, they were very focused and intense. We all stood at attention with very little movement.

I was very nervous but was happy to have had the opportunity to represent NASA. I wanted to make sure I had given the offering properly. Everyone felt I had done a great job, and I have never felt so proud to represent NASA and my country.

In the end, I guess it was fitting that the Safety and Mission Assurance Officer be the one to represent NASA in a ceremony praying for the Safety of the Launch Campaign and Mission Success!

This entry was posted on Wednesday, February 26th, 2014 at 8:27 am and is filed under GPM in Japan, the Road to Launch. You can follow any responses to this entry through the RSS 2.0 feed. Both comments and pings are currently closed.