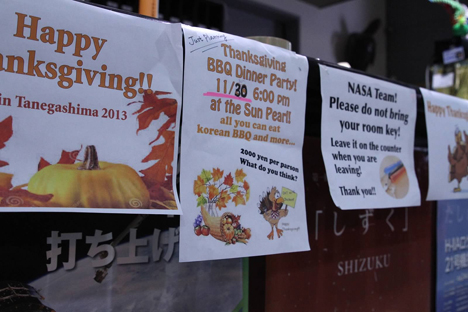 The kitchen of the Sun Pearl hotel doesn’t have an oven. Most Japanese kitchen’s don’t, in fact, but Saturday morning, Nov. 30, the borrowed kitchen was in full swing. Cody Buell, systems administrator for the Global Precipitation Measurement mission’s team in Japan, chopped mushrooms that would go into the stuffing that Courtney Buell was stirring together on the stove. Yumiko Seki, an engineer for Mitsubishi Heavy Industries responsible for launch services for the Japan Aerospace and Exploration Agency, chopped garlic and onions at another counter. Meanwhile Suja Lee, the GPM support staff interpreter, put together the sauce for Korean barbecue in case the menu of mashed potatoes, mashed sweet potatoes and green bean casserole wasn’t enough.

As for the four turkeys, Courtney told me, Lou Nagao on the Ground Support Equipment team, had arranged for them, and she didn’t know where they were coming from. They were just going to show up by three. 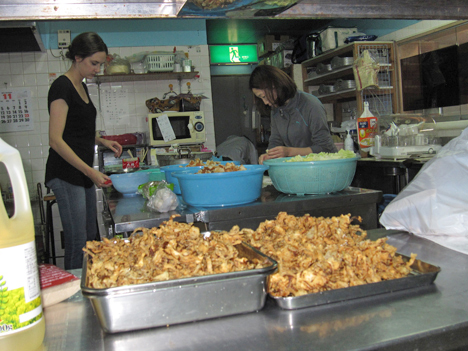 Courtney Buell and Yumiko Seki at work in the kitchen of the Sun Pearl Hotel. Credit: NASA / Ellen Gray

The third Thursday of November in Japan is just another Thursday. In the GPM clean room, Thanksgiving day was busy as the mechanical team moved the spacecraft from its traveling L-frame to the Aronson table, which supports and rotates the spacecraft as needed for the inspections that followed. So Thanksgiving dinner was moved to Saturday when most of the team had downtime. (On the schedule were solar array inspection and prep work for battery installation.)

Lou wasn’t hard to find. He was in the hotel lobby with Midori Asou, the owner of the Sun Pearl who was opening boxes of Christmas ornaments and putting him to work decorating the small trees set around the entrance. The Sun Pearl lobby was already a riot of decorations, most of them space related. Models of Japanese rockets stand on the reception desk, and a stuffed HII-A, GPM’s launch vehicle, hangs from the overhang with the GPM water cycle card hanging below. On the far wall are more than a dozen mission stickers, including one for GPM, one for its predecessor mission the Tropical Rainfall Measuring Mission, and one for GCOM-W1, a JAXA rain and climate mission that will contribute data to the GPM mission’s global data products.

The Sun Pearl is one of the hotels that the GPM team has been staying at for years, as various team members have come for launch site visits and meetings with their JAXA and Mitsubishi counterparts. It’s family-run and feels as quirky as any bed-and-breakfast. Lou joked with Midori-san as she told him which set of ornaments go with which tree. Her English isn’t strong and, despite having Japanese parents, Lou’s Japanese isn’t strong either, but it didn’t matter — they were getting along just fine. 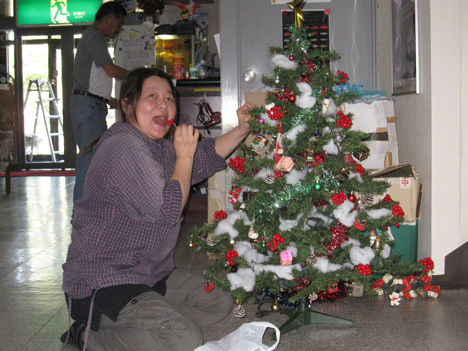 Midori Asou, one of the owners of the Sun Pearl Hotel, pretending to eat a fake holly berry while she decorates a Christmas tree. Credit: NASA / Ellen Gray

Midori-san was one of the big reasons we were having Thanksgiving at all, Lou told me. She helped Courtney, Cody, and Suja find ingredients for an American meal, helping them navigate the small town grocers. She recruited a few of her friends with ovens to bake apple pie, and she opened up her kitchen to the cooks.

As for the four turkeys, yes, Lou had arranged for them. But he didn’t know where they were coming from either.

Courtney and Cody, the Thanksgiving organizers, had struck out with finding turkeys earlier in the week when Lou heard about their search. He started asking around as well, and one of the people he asked was the owner of the karaoke bar across the street, Emiko’s Club. Karaoke is huge in Japan, and a big hit among the GPM team, too. Once Emiko-san understood what Lou was looking for, she introduced him to another of the karaoke singers at the bar that night, Toshihiko Nakagawa, one of the engineering team leads from Mitsubishi. Nakagawa-san said he would see if he could help and on Tuesday asked Lou how many turkeys they needed.

Mitsubishi Heavy Industries is the primary contractor for JAXA at Tanegashima Space Center. They manage most of the operations including launch preparations and assembling the rocket. They are the team on the ground that works closest with the GPM engineering team. But most of the GPM team has been at Tanegashima for a relatively short time, and at work, it’s all about the mission. This Thanksgiving dinner was a chance to get to know them as fellow members of the GPM family. 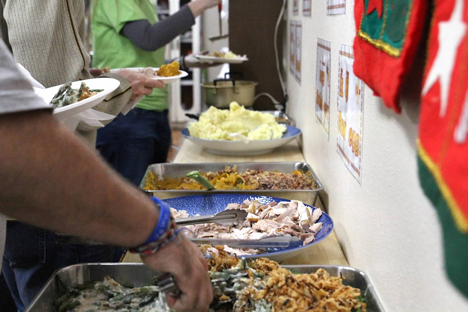 The four turkeys showed up, fully cooked as promised, and at six p.m. so did a long line of hungry Americans and their Japanese guests. Jay Parker, GPM’s mechanical team lead, opened the evening with thanks for our hosts and the crew that put dinner together. He added a special tanks for the Mitsubishi team and their crane operator who performed the very difficult lift of the spacecraft out of the L-frame. Then, paper plates loaded with mashed potatoes and sweet potatoes, green bean casserole, turkey, and Korean barbecue from the grill out back, everyone found a seat in the dining room or at one of the extra tables set up in the lobby and dug in — with chopsticks.

The food was delicious, a little bit of home brought across the ocean for a night. Lou introduced me to Emiko-san, and a little later found me again to introduce me to Nakagawa-san and another Mitsubishi engineer. “This is Sakae-san. He got us the turkeys!” said Lou. Sakea Gushima is on Nakagawa-san’s team and when Nakagawa-san mentioned the Americans looking for turkeys, he knew a guy. He has a friend who just took over management of one of the local restaurants and put in the order.

While we chatted, Lou explained what Thanksgiving meant for us. “It’s a time when families come together,” he said. “And if you can’t go home, someone will take you in.” 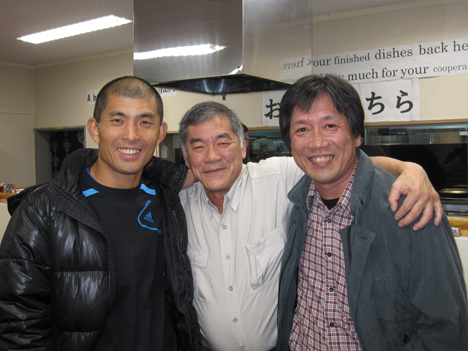 This entry was posted on Wednesday, December 18th, 2013 at 3:10 pm and is filed under GPM in Japan, the Road to Launch. You can follow any responses to this entry through the RSS 2.0 feed. Both comments and pings are currently closed.