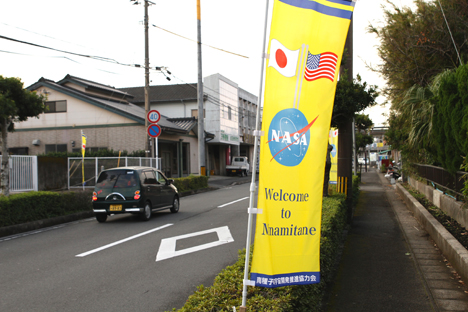 Steering wheel on the right side of the car, my windshield wiper slaps back and forth every time I try to signal a turn at an intersection. The controls are opposite their placement in The States, and deeply wired muscle memory is a tough thing to reprogram. I regard each and every moment at an intersection like brain surgery, with one false move potentially causing irreparable damage.

Driving on Tanegashima Island to the eponymously named Space Center presents a visitor with powerful reminders that Japan is an intentional, motivated nation. With a land area smaller than California, the country boasts a world-class space center, carved into a rugged stretch of Pacific beach. Tectonic activity through the ages aggressively defined the formation of the terrain, with huge cliffs towering over deeply folded valleys. Ancient upheavals of Earth’s suboceanic crust sent sandstone spires rising, the sedimentary stone establishing rugged rules for hearty inhabitants while occasional outcroppings of harder, volcanic matter remind visitors that they’re squarely in the Ring of Fire. The intensely sculpted geography forced road builders to draw inspiration from bowls of udon noodles; wild twists and turns test drivers concentration every single kilometer. It’s over these roads that NASA must gingerly truck the Global Precipitation Measurement satellite from the Shimama Port, a few kilometers distant as the crow flies, but a substantially longer drive across tangled, winding roads. 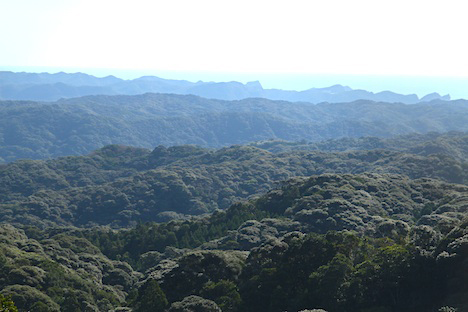 The view from a park in Minamitane with a view of the launch site. Tanegashima’s landscape is folded mountains and the ocean on the horizon. Credit: NASA / Michael Starobin

Tanegashima Island is broken into three sections. Most of the NASA crowd lives in a warren of small hotels in the southern section called Minamitane. It’s an unassuming town, clearly a bedroom community for the nearby space center and its support services. School kids in brown uniforms and smart black backpacks scamper on the narrow sidewalks each morning, running to school. Far from the blazing neon and sodium glare of downtown Tokyo, Minamitane flickers while the great capitol city to the north blazes. But like small towns everywhere around the world, the affairs of distant places matters little compared to day-to-day realities of making a living. Hotel and restaurant workers realize an unusually large crowd of jet-lagged and hungry Americans are in town, and it’s clear that beyond a short term business opportunity, there’s a genuine local enthusiasm to be part of this extraordinary multinational effort.

Minamitane shows signs of the hardscrabble existence that must attend its remote location. Few lights glow after the sun goes down and restaurants are best found with a  good plan before setting out and a map in hand. Many buildings need paint. Outdoor commercial signs– fewer than a visitor might initially expect to see –have clearly weathered many seasons. But despite its apparently weathered presentation, Minamitane has clearly tried to show it’s best face. Yellow banners welcoming NASA flutter along streets and not a scrap of trash appears anywhere. 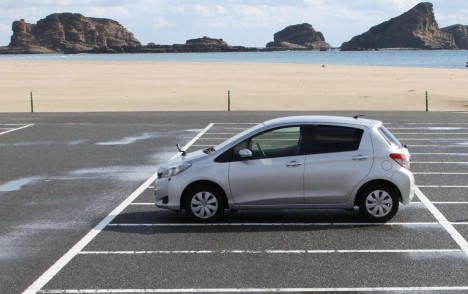 One of the ubiquitous silver Toyotas rented out to the NASA team. Credit: NASA / Michael Starobin

It cannot be overstated: this is a profoundly intentional nation. To support the army of American staff who have descended like starlings, a flock of matching silver Toyotas have been shipped from the larger island Kyushu. Each morning that flock flits at forty KPH across circuitous roads until it punctures the Space Center’s security perimeter, alighting outside a building humbly called STA-2.

If the Japanese Aerospace Exploration Agency, or JAXA, is the soul of Tanegashima Space Center, it’s clear that Mitsubishi Heavy Industries is the brains. Mitsubishi manufacturers the HII-A rocket on which the satellite will fly to space, and Mitsubishi runs the operations on site. But the cosmetic polish of the austere, white building where we work has long since faded. There are no markings, insignia, logos, or even lights on its outside, and signs of weary use suggest that the decades of Japan’s storied economic power continue to recede into the past. Rust mottles the metal front door, while discolored institutional tiles line the completely featureless hallways. 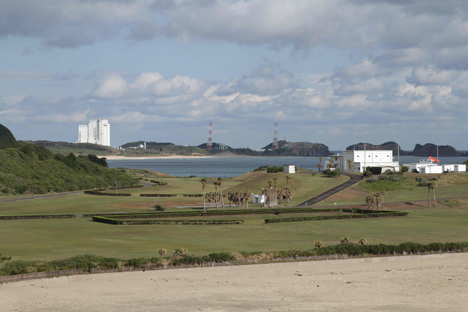 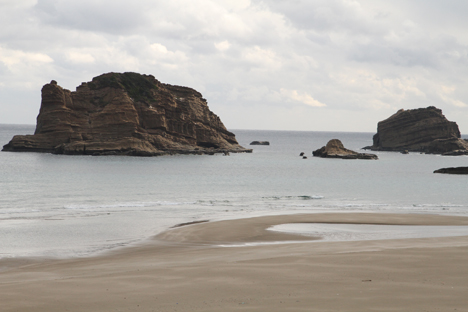 Tanegashima Space Center is on the east coast of the island, right on the water. Sea rocks dot the nearby shore. Credit: NASA / Michael Starobin

NASA staff occupies emotionally vacant third floor offices, with metal desks of 20th century vintage pushed together to make rows of work tables. On the first floor, teams of engineers have comandeered air conditioned rooms and installed racks of computers and electronics and other vital equipment. A small room for donning  “bunny” suits leads through an airlock into the cavernous brightly lit clean room. Through this portal a visitor who makes the transition realizes in a heartbeat that the tumbledown trappings outside have nothing to do with the most fundamental characteristic of the place and the culture. Like the town that support operations at the nearby Space Center, like the exceedingly polite nation that graciously hosts a horde of loud, blue-shirted foreigners, this is a profoundly intentional room, maintained by a focused, intentional company, working for a deeply focused agency.  Inside the cleanroom a twenty-first century space program hums vigorously. The gleaming GPM satellite reflects lights from around the room like a great jewel hewn from the surrounding mountains. Inside this aging relic of an industrial giant, there is still majesty and promise of great things to come.

This entry was posted on Saturday, November 30th, 2013 at 4:02 am and is filed under GPM in Japan, the Road to Launch. You can follow any responses to this entry through the RSS 2.0 feed. Both comments and pings are currently closed.