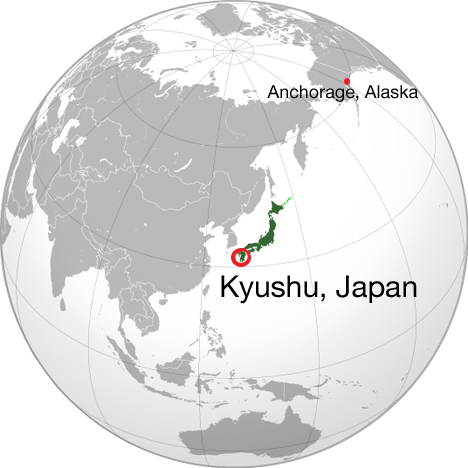 We landed in Kitakyushu, Japan, on Sunday, Nov. 24, and as soon as Global Precipitation Measurement satellite’s shipping container was loaded onto the barge that would take it to Tanegashima Island, those of us who flew on the C-5 and the unloading team that met us at the airport had to travel a different, more people friendly route to the island.

When I first heard the names Tanegashima and Kitakyushu, I had no idea where they were on a map. Even Tokyo, the only Japanese city I was familiar with, was a vague dot on the elbow of Honshu in my mind.

Japan is an archipelago, made up of 6,582 small islands and four big ones. We landed on the southernmost of the big four, Kyushu. Kitakyushu literally means “north Kyushu,” and the airport is a partially man-made island in the Inland Sea to the east of the city. On the Pacific Ring of Fire, the islands are volcanic in origin, and it was easy to see in the landscape. Across the bay from the airport mountains rose steeply from the sea, their silhouettes looking painted against the sky. 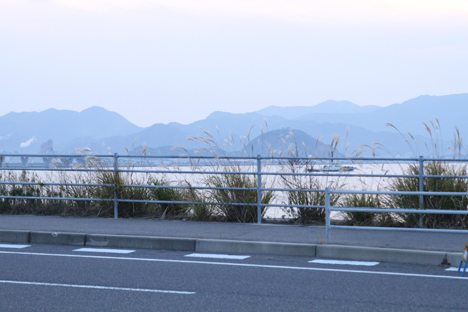 After collapsing in our hotel for the night, our group of thirty or so, led by GPM’s interpreter Suja Lee, got up bright and early on Nov. 25 to take the bullet train from Kitakyushu to Kagoshima, a major city on the south side of Kyushu. The train was sleek and smooth, like something out of science fiction on the outside, but comfortable inside. It was an hour and a half ride so I broke out my knitting and watched the countryside of farm fields and densely forested mountains go by. 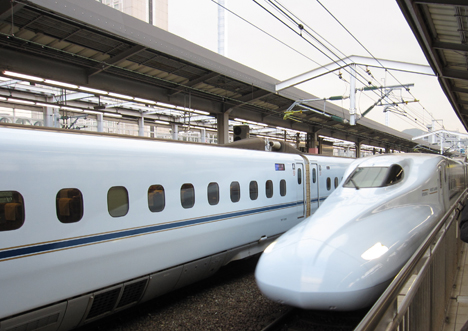 At Kagoshima, we hopped in taxis to get to the ferry station for the ride to Tanegashima. We had a little while to wait before shipping out, and I had my first experience ordering food from what looked like a vending machine for a sit-down meal. Step one, look at the picture menu. Step two, feed in your money. Step three, match the price and the Japanese letters to the button on the machine. The waitress was very helpful, despite the language barrier, and took the ticket the machine spit out to put the order in. I couldn’t tell from the picture what the meat was that came with my curry rice — it turned out to be chicken, and the whole meal was quite tasty. 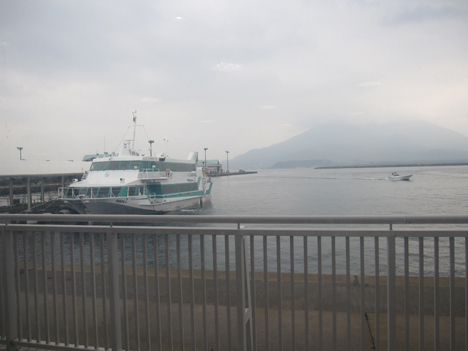 The view outside the ferry station of Mt. Sakurajima, an active volcano across the bay. Credit: NASA / Ellen Gray

Tanegashima Island is 62 nautical miles south of Kagoshima. The ferry took about an hour and forty minutes in slightly rough water. The type of boat we were on, a hydrofoil, kept us above the water and avoided the worst of the waves.

Three meter waves and gale force winds had passed through the night before, and the barge that was carrying GPM actually had to anchor at Saiki at the mouth of the Inland Sea to wait for the seas to settle before going out into the open ocean. They would be a day behind us to Tanegashima. 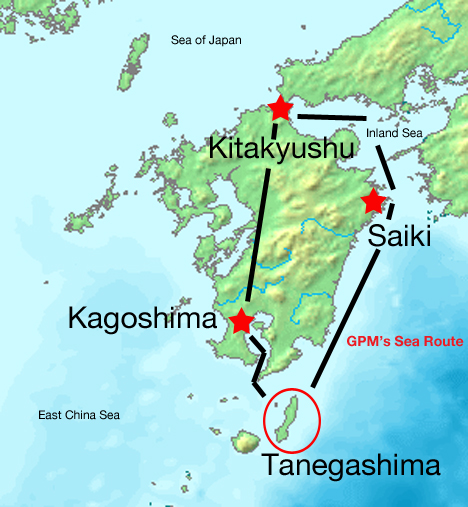 Map of Kyushu showing the route to Tanegashima taken by the GPM shipping container by sea (right) and the route taken by the majority of the GPM team by train and ferry (left). Source map: Wikimedia commons

Tanegashima is part of a cluster of islands south of Kyushu. Long and skinny, we made landfall in the blustery northern port of Nishinoomote. Tanegashima Space Center is located on the southern tip of the island, so we piled into cars and headed south for Minamitane, the town where we were staying.

Tired and hungry after the long day, checking into our hotel I introduced myself in the little Japanese I learned for this trip, and I smiled and nodded as our host broke down her instructions into the handful of English words she had. That was where the fact that we were in Japan really settled in. We were on the other side of the world, joining forces with another country to launch a global mission into the sky. All we needed now was the satellite.

This entry was posted on Thursday, November 28th, 2013 at 8:27 am and is filed under GPM in Japan, the Road to Launch. You can follow any responses to this entry through the RSS 2.0 feed. Both comments and pings are currently closed.