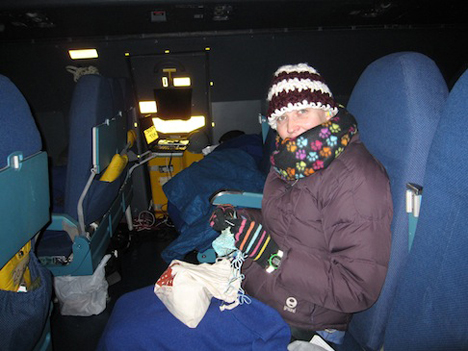 When they told us to dress in layers for the flight, they weren’t kidding. At altitude, the C-5 transporting the Global Precipitation Measurement satellite is cold. After waking up from my exhausted sleep that passed the first five hours, my feet were blocks of ice from the draft along the floor. I was wearing three shirts and a sweater under my jacket, long underwear and pants, and winter hat, gloves and scarf.

Others were starting to get up and move around. The project brought all our own food for the trip, and the passenger area had a small galley with small ovens to heat it up. Tin foil dishes of crab cakes, chicken wings, roast beef and vegetables; sandwiches and chips; and pancakes and eggs for breakfast. 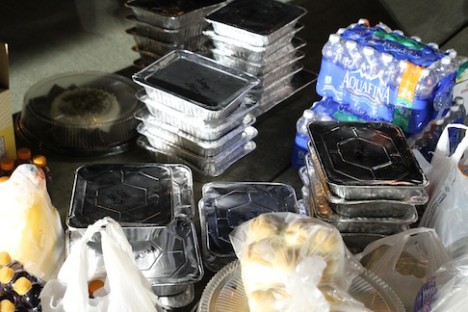 After eating, I moved to the back of the passenger section where there was a free double seat, so Michael Starobin, the video producer joining me documenting the trip, could stretch out on the row we shared. The best thing about the back rows? They’re warmer than up front.

Cozy with my two blankets, I was almost asleep again when project manager Art Azarbarzin came by. “Did you hear?” he asked loudly over the engine noise and the ear plugs. I shook my head. “We’re going to have to land. The headwinds are eating up too much fuel.”

The C5 was originally supposed to be refueled in the air, en route, making the flight about 15 hours long from Andrews on the U.S. East Coast to Kitakyushu, Japan. Fighting upstream, as it were, against the headwinds meant the calculations for our expected fuel usage, even with the in-air refuel, wouldn’t be enough to get us all the way to Japan.

“We’re landing in Alaska,” Dani Alvardo told me after we got more information from the Air Force crew. Specifically, we were landing at Elmendorf Air Force Base near Anchorage. “The refuel should take two to three hours. Hopefully. More than that and it might be one or two days before we get to Kitakyushu,” he said.

Two hours or two days? It all depended on staying inside the time waiver granted to the C5 flight crew to fly for an extended period of time before they had to go on mandatory rest, and whether or not the tiny Kitakyushu Airport would let us land on Saturday, the same day they had a 747 flying in. Everyone was crossing their fingers that we could get down, get fueled, and get gone before the clock ran out. 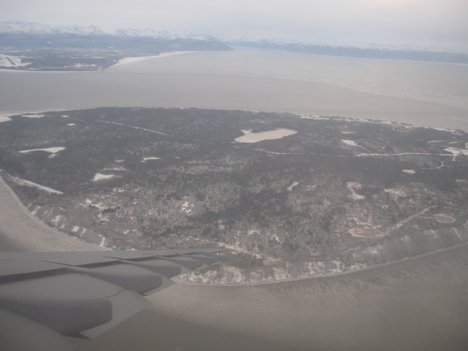 I’d never been to Alaska before and my first view of it was actually a picture Michael Starobin took out the emergency exit window. Anchorage is on the water, and bare trees and snow already covered the landscape. When we deplaned, we were hit with bitingly cold air. I thought Maryland was cold at 37 degrees F when we were standing outside at Andrews. At Elmendorf it was 7 degrees F. Was I ever glad that dressing for the C-5 meant breaking out the winter gear.

Fortunately the Air Force loaded us onto a heated bus where we waited next to the plane. I listened in as project manager Art Azarbarzin checked in with Mike Miller who was monitoring the g-forces inside the container as we landed. One g is the force of gravity that holds us to Earth’s surface. GPM felt less than one g from the deceleration of the plane, which is very good for the spacecraft — it didn’t jostle around. The temperature inside the container held steady in the high 60s F with the help of the heater on the Environmental Control Unit, and the dry Alaska air helped the unit with keeping the relative humidity below 60 percent. The satellite was in good shape.

While we waited, breathing diesel fumes and watching F22s take off, the joke went around that we should have taken the Hawaii route (short answer, flying over Hawaii is a longer route to Japan). But after about two hours we were boarding the C-5 again, and forty minutes later, we were taxiing down the runaway. We sat and waited again for our turn to take off.

Then we got the announcement. We were grounded. The crew was on 17 hours of mandatory rest. They were two minutes over their waiver deadline. 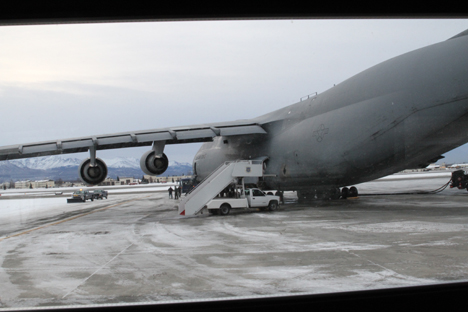 The C-5 on the ground at Elmendorf Air Force Base near Anchorage, Alaska. Credit: NASA / Michael Starobin

Nine a.m. in Alaska at this time of year is still full dark. But out we went to the bus that shuttled us from the Air Force Inns to the air field. It was raining. Worse, it was 25 degrees F outside so it was freezing rain.

Jean Manall, the logistic coordinator for GPM’s shipment, said as we walked out the door, “We’ve got to be optimistic.” But optimism won’t beat bad weather. We waited by the airfield for an hour before getting back on the bus to the Air Force Inns. The base had closed the airfield.

Our new departure time was Saturday morning, for a Sunday arrival in Kitakyushu, Japan. The good news was, we don’t have a time limit at Kitakyushu Airport like we did for Saturday because of the 747. The bad news was, we couldn’t take any more delays. While we were waiting to check back into our rooms, Jean came up to Art and told him our permits to close the road and drive the spacecraft from the airport to the boat for the next leg of its journey expired on Sunday.

Art laughed, resigned, as he pulled out his phone to call JAXA to update them on the schedule and warn them we might need an extension if the weather didn’t let up. “It’s more complex getting to the launch site than building the satellite,” he joked.

This entry was posted on Tuesday, November 26th, 2013 at 3:39 pm and is filed under GPM in Japan, the Road to Launch. You can follow any responses to this entry through the RSS 2.0 feed. Both comments and pings are currently closed.