Keeping in Touch: Communication in the Field

One of the keys to IceBridge’s success is effective communication between every member of the team. But keeping in touch in the remote locales IceBridge operates from can sometimes be tricky. On plane there’s the intercom system routing through headsets and the radios and Iridium satellite communication devices aboard the P-3 allow the plane to communicate with someone on the ground virtually anywhere in the world. 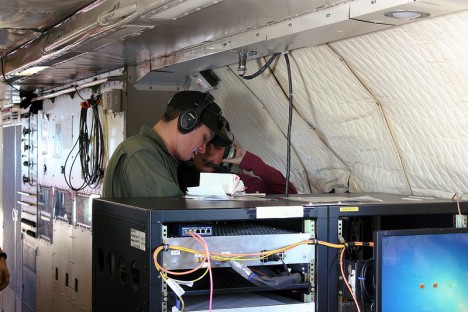 But what about when the team is on the ground? When everyone is in the office or their rooms then email works. When away from the office, however, things get more complicated. Some areas have mobile phone coverage and it’s easy to take such a thing for granted these days. But in Antarctica, a locale where keeping in touch can literally be a matter of life or death, cell phone service is nonexistent. Even in a developed station like McMurdo the smartest of phones becomes nothing more than a pocket-sized music player, camera and entertainment device.

To meet the communications needs of people living and working in this often harsh environment, three tools some people might consider virtually obsolete: the landline telephone, the two-way radio and the pager.

In the U.S., many homes are ditching their landlines. But in Antarctica they’ve never gone out of style. The backbone of the system is different, as calls are routed through the internet through the U.S. Antarctic Program’s office in Denver, but from the user’s perspective things are just as they were years ago.

Dorm rooms, offices and common areas all have telephones that can be used to call others on the station. IceBridge’s two main work areas, McMurdo’s Crary Lab and the team’s tents at the sea ice airfield, have telephones set up, allowing team members in these two locations to stay in touch.

One of the IceBridge team tents at McMurdo’s sea ice airfield. Inside the tent is a telephone, which team members can use to keep in touch with everyone back in McMurdo town. Credit: NASA / Jefferson Beck

If you know someone is in their room or at the office, calling them on a landline phone is by far the quickest and most reliable way to contact them. However, it isn’t uncommon for team members to be out tending to instrument ground stations, unloading cargo or visiting the weather office for the latest forecast. In these cases, team members rely on a seemingly obsolete technology, the pager.

Before the widespread adoption of cell phones, personal pagers were fairly common. You’d call someone’s pager and enter your phone number and their device would beep, showing that you wanted to talk to someone. That person would then need to find a phone and give you a call. As inconvenient as this sounds the infrastructure for a paging system is more robust and less complicated than that needed for cell service. 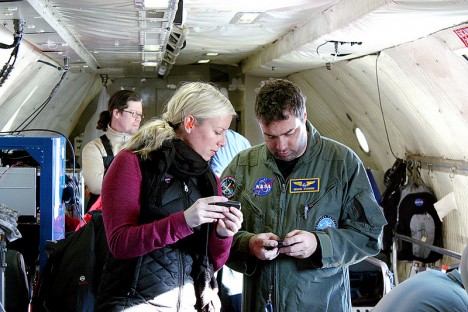 The pagers at McMurdo Station are a little more advanced though, allowing for text pages and updates. By sending an email to a special address you can send a short message to someone’s pager and station management use the pager network to send out updates on weather conditions, something of vital importance in an environment like Antarctica.

Pagers and telephones work out great in town or between town and the airfield because nobody is terribly far from a phone at any time. But for people working outside of town, such as the people setting up instrument ground stations or the team who did the GPS survey of Black Island more than 20 miles away, an extra step is called for. This is where the two-way radio comes into play.

Members of the Airborne Topographic Mapper team return from an attempt at a ground survey mission conducted on nearby Black Island. Credit: NASA / Jefferson Beck

The VHF two-way radios used at McMurdo are a great way for widespread teams to keep in touch. Each radio can tune into one of a handful of channels dedicated for different purposes. IceBridge personnel communicate on the science channel, while shuttle drivers and airfield personnel would use different channels.

Putting It All Together

Although not as convenient as the average smart phone, the combination of land line telephones, pagers and two-way radios provides a way for people living and working in Antarctica to stay in touch with one another.

This entry was posted on Monday, November 25th, 2013 at 5:13 pm and is filed under Operation IceBridge, Operation IceBridge: Antarctic 2013. You can follow any responses to this entry through the RSS 2.0 feed. Both comments and pings are currently closed.