A rain gauge will collect how much rain falls, but how exactly do scientists measure the size, shape, and fall speed of raindrops near the ground? Patrick Gatlin of NASA’s Marshall Space Flight Center, sent us a couple photos from Iowa of the instrument that does exactly that: a two-dimensional video disdrometer. 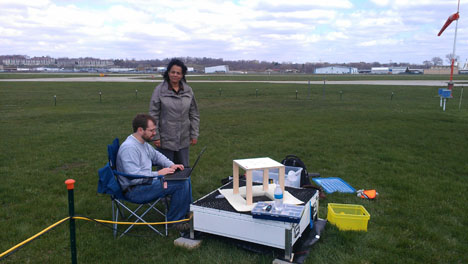 Shaped like a giant pizza box, the disdrometer has a medium sized square opening in the center. Along two adjacent sides at 90 degrees from each other are two video camera systems that record the raindrops as they fall. With a front view and side view of the droplets, scientists can determine their size and shape, and get an idea of how many of differing sizes are falling.

Hamburger shaped raindrop viewed by the disdrometer software from the front (left) and side (right). Credit: Patrick Gatlin / NASA

“A common misconception is that raindrops are shaped like a tear-drop, but actually they are shaped more like a hamburger bun similar to the 5 mm sized raindrop shown here,” Gatlin says. During IFloodS, millions of raindrops will be measured by these type of rainfall sensors. Scientists will examine all these raindrops in order to provide better estimates of rainfall from weather radars probing the atmosphere from the ground up and those looking down on Earth from space, like the eventual GPM Core satellite. 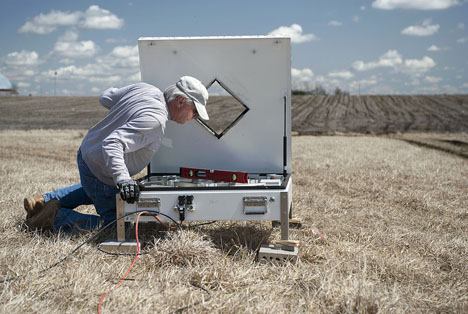 This entry was posted on Wednesday, May 1st, 2013 at 2:06 pm and is filed under Iowa Flood Studies. You can follow any responses to this entry through the RSS 2.0 feed. Both comments and pings are currently closed.