Channel fever: an unusual excitement or restlessness common among a ship’s crew when the ship nears port after a voyage (The term probably refers to the English Channel, between southern England and northern France.)

Knorr-crew T-shirt for SPURS – there is no significance to the dinosaur as far as anyone knows.

Now that all the oceanography is done, it’s four days of steaming to the Azores. During that time there is still plenty to do. A shipping container is being prepared for freight to Woods Hole. People are comparing notes on their flights out of the Azores and taking guesses at what time we will be getting off the ship.

We are writing expedition reports (something your blogger has pretty well in hand!). I took over 2,000 pictures during the voyage and wrote 32 blog posts. I plan on finishing this trip with an epilogue as next posting. Then, after I return home, you will be able to access my presentation entitled “An Illustrated SPURS Campaign Summary,” which captures the entire expedition accomplishments in pictures. Remember too, if you have become a fan of SPURS, that there are more expeditions in 2013 and a sensor web in the water until next October. I will be blogging periodically to keep you up-to-date on developments and findings. For now, I need a rest from blogging. It feels like channel fever! 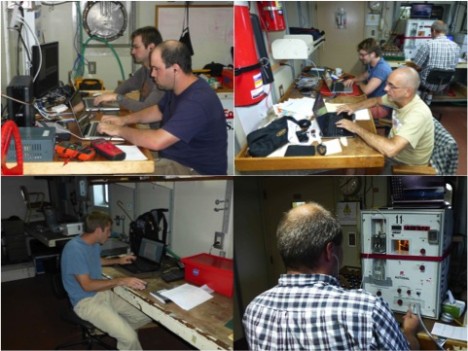 Personal gear has to be packed and cabins cleaned. That leaves people with time to think about what they will be doing in the Azores or when they get home. People are laughing more and joking more. Sometimes, with all this activity, happiness emerges as channel fever. 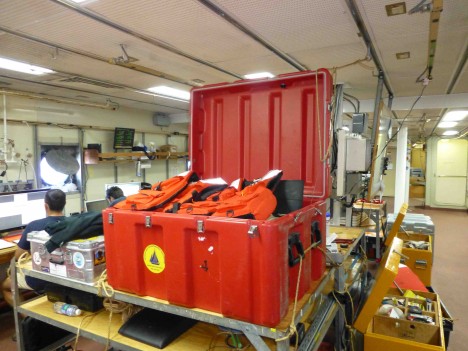 Our bags are packed.

Does Julius have channel fever?

Maybe it’s the transformation of the ship – from being loaded down with gear to empty cleanliness. There are empty reels and baskets indicating our success at deploying moorings. The CTD master control station, hub of so much activity for the past weeks, is now quiet. Everywhere you look, it’s looking like its over. It’s enough to bring on channel fever. 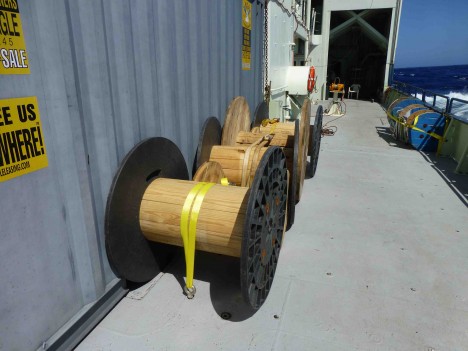 The reels are empty now.

All the CTD stations are over.

We are taking stock at what we have done. We deployed three moorings, 100 CTD stations, 764 Underway CTD casts, 25 Argo floats, 18 surface drifters and a Lagrangian float. We left three Wavegliders and three Seagliders patrolling the seas near the moorings. The salinity field over a 120×120 mile piece of ocean was pretty well mapped. We have gigabytes of data to sift through and analyze. And we are pleased. We are weary. And we know when we see the Azores we are nearly home. That feels like channel fever!

We leave the lovely blue Sargasso Sea in our wake, but we can feel the harbor channel in Ponta Delgada, Azores in our future. We feel the accomplishment of the mission, and the promise of home. That is channel fever.

This entry was posted on Friday, October 12th, 2012 at 9:35 am and is filed under Salinity Processes in the Upper Ocean Regional Study (SPURS). You can follow any responses to this entry through the RSS 2.0 feed. Both comments and pings are currently closed.