When on land, an oceanography brain usually associates the term ocean motion with the movement of seawater in the form of ocean currents. 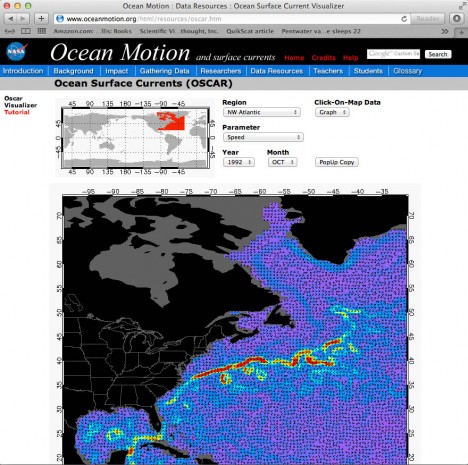 However, when actually on the ocean, the biggest signal for our oceanography brains to cope with is the role of ocean motion in the pitch and roll of the ship (due to wind seas and swell). OK, so I am telling you that feelings matter. If you have ever been seasick, then you know what I am talking about!

So, if you spend 33 days on a small vessel at sea, you get a great appreciation of ship motion. There are actual six axes of motion of two kinds (lateral and rotational). Laterally there are surge (fore and aft), sway (port and starboard), and heave (up and down). Rotation also occurs around three axes that are more commonly discussed (maybe because we feel them more?). They are pitch (around port to starboard axis), roll (around bow to stern axis), and yaw (around the vertical axis). We can definitely feel all these motions but some do matter to our feelings more than others. Perhaps the most noticeable ones for land-loving creatures like humans are heave (the accelerating elevator feeling) and rotational motions largely absent in our daily lives (pitch and roll). Together, these can be combined into a kind of perfect storm of corkscrew-like motion that weakens the resolve of even veteran mariners. Lucky for us, the SPURS cruise has been pretty calm and no one has been suffering from seasickness.

By far the most noticeable and everyday motions on a ship are that of pitch and roll. Pitch is especially noticeable when navigating into a swell or into the wind. Going downwind or in the direction of the swell is much more gentle pitch-wise (sailors are wished good luck by offering them “fair winds and following seas”). Roll is especially diabolic when one is navigating nearly parallel with the troughs and crests of the swell. This is something you DO NOT do when the seas are large because you may very well roll over (not good; do not try this at home!). Faced with large seas, the safest course is to ride the weather facing into the wind and waves (and just suffer the horrible pitching).

Sorry to go on for so long about the ship motion, but its an ever present partner to our expedition and you deserve a share for sticking with us!

You may be wondering about the difference of wind seas and swell. Good question!  Swell and wind seas are both manifestations of surface gravity waves. Swell is caused by wind forcing of the ocean in some remote location. Wind seas are the jumble of more disorganized waves that come up directly under and within a wind event. There has been a good swell running in the SPURS region for the last two weeks due to Hurricane Nadine hundreds of miles away. On top of the swell, the wind waves cause whitecaps and noticeable roughness above wind speeds of about 10 miles per hour.

Well, on Knorr we are not out here to study wind waves (just feel them). I should get on to talking a little about ocean surface currents. Our main focus is the surface salinity and how it gets to be the way it is. Ocean currents moving patches of different salinity around is one key factor in accounting for salinity changes at any site in the ocean (we call this advection of salinity). The Ocean Motion web site produced for the NASA Physical Oceanography Program has a wealth of background information on ocean surface currents. Here in SPURS we believe there are only weak average currents (a year of moored measurements will determine that for sure), but that the wind-forced transient currents play an important role in the local water cycle (and surface salinity values). One obvious reason to think this is that the salinity maximum here is hundreds of miles north of the maximum in evaporation minus precipitation. The simplest explanation for this displacement is the northward movement of surface waters induced by the trade winds. On average, upper ocean waters forced by wind move 90 degrees to the right of the wind in the northern hemisphere so the easterlies of the trades give the ocean waters a push toward the north. This hypothesis will be tested by the SPURS observations over the coming year. 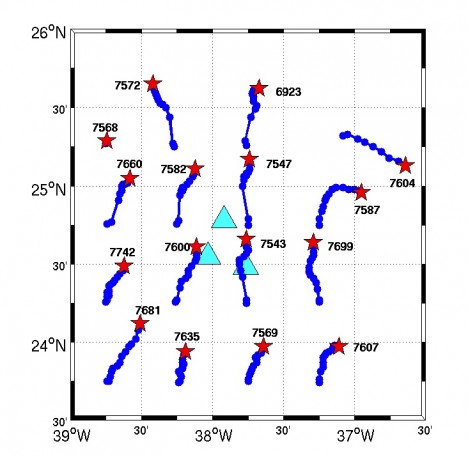 Out here it is extraordinarily difficult to fully appreciate the complexity of the currents around us in the upper ocean. The average current is small, but there are eddies and fronts with stronger flows around us that we observe sporadically as we move around from hour to hour. 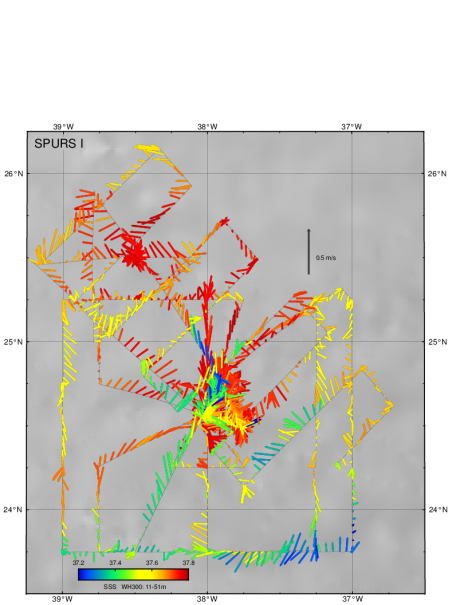 Map of current vectors in the upper 167 feet (51m) along our track color coded by the surface salinity. (Courtesy of Phil Mele.)

We will only be able to make sense of our hour-to-hour estimates of ocean motion once we return to shore and can fully integrate the satellite and model information into the picture. We obtain details profiles of current vectors on each station but honestly have a tough time “connecting the dots” in real-time. It will take a good bit of analysis to understand the complex flow field.

It feels a little like mapping Washington, D.C. in one day, from your car, driving around with a simple still camera. We get some great snapshots, but we can only place them in a larger context when be have full access to maps, satellite images, and historical records (stuff most people cannot examine in their car while driving around!)

As in rest of life, context is important in oceanography. We strive for it, but as with most things, the perspective of hindsight provides the best context. Feeling seasick is no exception! It’s so awful in the moment, and such a trifle in the glory of the entire expedition.

This entry was posted on Thursday, October 11th, 2012 at 11:05 am and is filed under Salinity Processes in the Upper Ocean Regional Study (SPURS). You can follow any responses to this entry through the RSS 2.0 feed. Both comments and pings are currently closed.