Modeling And The Dry Side of SPURS 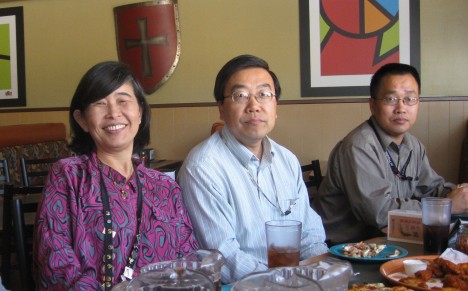 Yi Chao is one of the “spiritual leaders” of our “dry” team in SPURS (those people who help from land). He is an ocean modeler in California who has been involved with Aquarius and SPURS for many years. He long ago decided to be on the dry team because of the seasickness that he experienced ten years ago during the tests of the Aquarius precursor instrument. Worse of all, he tells me, he had to stay on deck for days during the entire expedition because his seasickness got much worse if he went inside. He decided right then that it would be the last voyage in his oceanographic career. Since then, Yi has been an “armchair” oceanographer, working on satellites and computer models of the 3-D changing ocean. With outstanding results, I might add. Stay dry, Yi!

Other key members of the dry team include Zhijin “Gene” Li, Peggy Li, Quoc Vu, and Fred Bingham (on the Knorr to supply dry humor). Gene has dedicated more than a decade to formulate, develop and refine an ocean data assimilation system at JPL. This system integrates measurements from satellite, underwater autonomous vehicles and other ocean measurements into sophisticated computer models to depict the ocean. To support SPURS, this system is based on the community Regional Ocean Modeling System (ROMS), configuring as a nested set of three spatial domains and zooming in using horizontal resolutions of 9,3 to 1 kilometer to represent flow systems from hundreds of to a few kilometers in size.

Before Knorr began its voyage, using the ROMS model, the dry team predicted for the “wet team” (as we the expeditioners are fondly known) that the SPURS area of research would be warmer and saltier than normal this year. Since then, the model system has been providing nowcast and forecast of the conditions of the SPURS ocean on a daily basis. The forecasts have helped to refine our sampling strategies aboard Knorr. Only time and more observations will determine whether their prediction is correct!

As the data stream from SPURS comes in, the model system will synthesize the observations and deliver more accurate forecasts of the ocean conditions, which will in turn help adjust the measurement strategy as needed. In essence, we use ROMS at NASA’s Jet Propulsion Laboratory (JPL) as our virtual ocean. It’s an estimate of the three-dimensional evolution of the ocean in the region given the data and physics of the ROMS model (both of which we try to improve).

Peggy Li is a dry team specialist in computer science (not an oceanographer) who is interested in building real-time visualization systems, convert data into useful information and present said systems in the fastest and most intuitive way. She has been providing outstanding support to SPURS investigators. She makes sure the information is flowing smoothly from the observation and model sources to the SPURS Data Management System. She is “on watch,” like those aboard Knorr. She initiates her day by checking to see if all the data are present on the SPURS visualization page. Only then she allows herself to have some coffee… such dedication! She has supported several field campaigns, but claims that this one is the most interesting by far.

A goal of the dry team is to integrate all the salinity data sets into a one-stop shopping web site for SPURS situation awareness. This includes data collected by both in situ and satellite platforms as well as output from computer models. Gathering the data from a distributed in situ (in place) sensor network is a challenge. All the in situ sensors send the collected data to their home institutions through satellite communication, where a quick first round of quality control is done by technicians who are experts in those instruments. For example, the ship R/V Knorr, flux mooring, wave glider, and Slocum glider send data to Woods Hole Oceanographic Institution in Massachusetts, the surface drifting buoys send data to the Scripps Institution of Oceanography in La Jolla, California, and the profiling floats and Seagliders send data to University of Washington in Seattle. The dry team computer at JPL in Pasadena, California, is checking all these computer servers around the country on the hourly basis, transferring and updating the data on the SPURS web site. 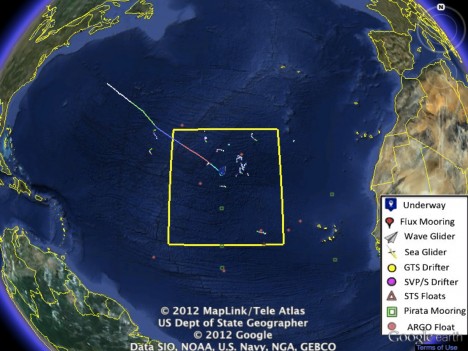 A screen shot for the SPURS data management system visualization using the Google Earth interface for monitoring the location for various instruments deployed from Knorr.

Using the well-known Google Earth interface, users on both the wet and dry teams can zoom in and out of the SPURS region to locate the most updated ship position, to read the salinity measurements from both in situ sensors and the Aquarius instrument in space, and to compare observations against the most recent model forecast. 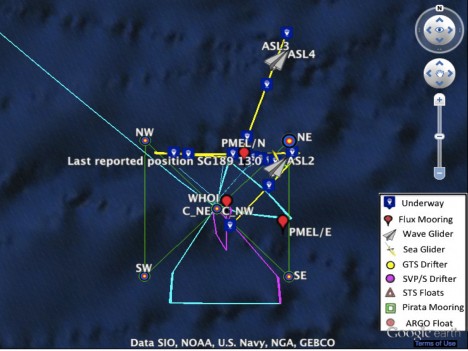 A closer look at the SPURS instruments’ deployment.

Communicating between the wet and dry teams has also been a challenge. The Internet link to shore is a shared resource between many U.S. research vessels at sea. It works well, but it is not like having a cable running right into your house!

All in all, the wet team on Knorr is much better informed because of the dry team’s efforts at JPL. Likewise, since one objective of SPURS is to improve our modeling of ocean salinity variations, the dry team is reaping great rewards from interaction with the wet team.

This entry was posted on Monday, October 1st, 2012 at 1:07 pm and is filed under Salinity Processes in the Upper Ocean Regional Study (SPURS). You can follow any responses to this entry through the RSS 2.0 feed. Both comments and pings are currently closed.