The Thermosalinograph, The Bow Of The Knorr, And The Chase For Highest Salinity

The thermosalinograph (TSG) on Knorr is a shipboard instrument for measuring temperature and salinity of the near surface water . It is situated in a lab and receives a flow of water taken in near the bow and piped out near the stern. 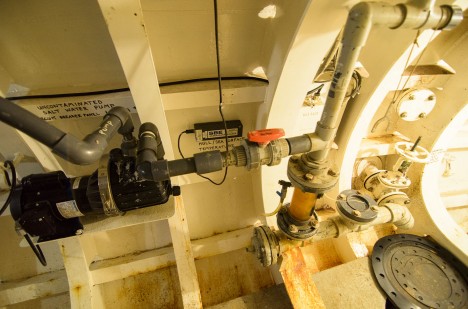 Inlet and pump for the Knorr’s thermosalinograph. (Photo: Julius Busecke.)

It is quite an adventure going down to see the inlet for the TSG. You go to a storage locker in the bow, then down a long tunnel, then forward at the bottom of the ship. And you discover something cool when you get there. When Knorr was built, they put viewing ports in the bow. One could sit below the waterline in the very front of the ship and watch the ocean go by. Wow! They must have been really cool for watching bottlenose dolphins playing in the ship’s bow wave! Sadly, the viewing ports were sandblasted at some time in the past, and one can no longer see through the glass. 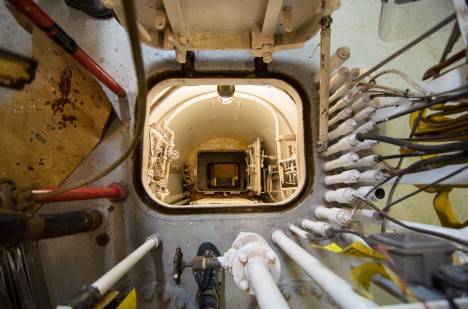 Start of downward journey to the thermosalinograph and the viewing port in the bow. (Photo: Julius Busecke.) 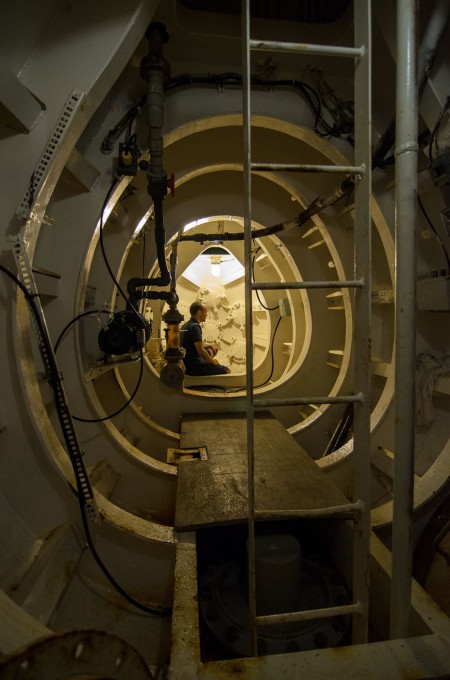 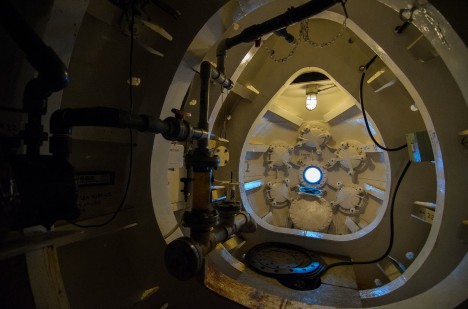 The viewing port in the bow of the Knorr. (Photo: Julius Busecke.)

On a cheerier note, an Aquarius project led by Prof. Arnold Gordon of Lamont Doherty Earth Observatory has been focused on surface salinity and the global record provided by TSGs on research vessels and ships of opportunity (commercial vessels that carry scientific equipment and take automatic measurements that scientists then use for their research).

Phil and Julius are aboard Knorr for SPURS from Lamont to assure the quality of the TSG data and provide ongoing analysis of the surface salinity from various instruments, including Aquarius. Chief Scientist Ray Schmitt set a contest in motion for a free dinner in the Azores for the group that documents and collects a bottle sample of the highest salinity of this SPURS expedition (most likely at the ocean surface). Game on! 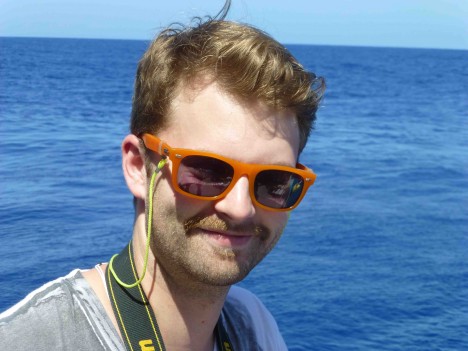 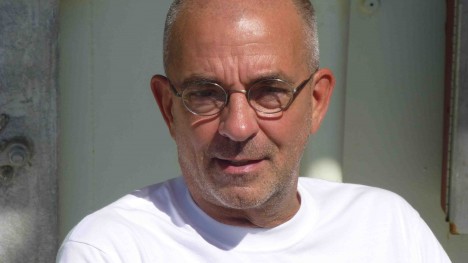 The closer we look at the ocean with increasingly sophisticated satellite and ship-based instrumentation, the less it looks like the textbook images of large-scale circulation gyres, and more of an assemblage of around 100-km-sized eddies. What role do these eddy “swirls” play in the overall climate system? And more specifically, how effective are eddies in stirring freshwater into the evaporative salty regimes of the subtropics? During the SPURS field program the TSG and hull-mounted Acoustic Doppler Current Profiler (ADCP) observations of ocean currents are used to map the eddy field, to ascertain their potential to compensate the excess evaporation. What we learn will be applied along with the Aquarius satellite ocean surface salinity data, to other areas of the ocean, to more fully grasp the impact of eddy dynamics on the marine hydrological system.

The Lamont team prepared for this expedition by inspecting the archival surface layer temperature and salinity in the SPURS region, collected by Voluntary Observing Ships and transits from past research expeditions to estimate the eddy flux of freshwater into the North Atlantic evaporative subtropics. What they found is encouraging: the ocean eddies very well may be the primary force in compensating the net regional evaporation. The seasonal cycle of the eddy effect seems to set the seasonal swings of the ocean surface salinity, not net evaporation. The SPURS expedition data along with the Aquarius satellite data provides a far more quantitative data set to pursue this topic.

SPURS experimental design and measurement methods, consisting of sensor-laden moorings with an array of autonomous instrumentation, provide a beautiful 3-D view of the ocean stratification and circulation as it evolves over time. The R/V Knorr’s high resolution TSG and ADCP, as well as the data stream from the Aquarius satellite, link together the data from all these assets, to fully capture the eddy field and ascertain its role in the larger scale system. It’s exciting to see the complex factors influencing ocean surface salinity coming into focus! 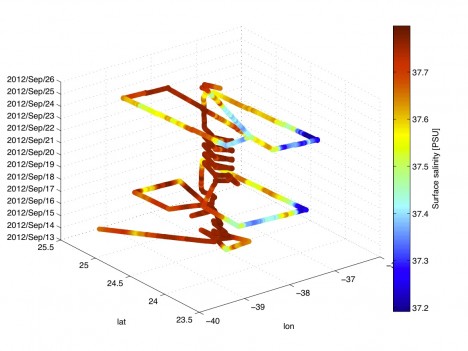 While we can guess what we might observe, being there to actually see the data as it rolls in allows for the building of understanding and thus adjustment of the experimental design to maximum return. The observations from the Knorr will expand our quantitative knowledge of how the ocean, and its field of eddies, are coupled to the sea-air flux of water. That is oceanographer speak for “this is awesome!”

This entry was posted on Wednesday, September 26th, 2012 at 3:19 pm and is filed under Salinity Processes in the Upper Ocean Regional Study (SPURS). You can follow any responses to this entry through the RSS 2.0 feed. Both comments and pings are currently closed.