A NOAA buoy in the water.

When we are doing work at sea, it hardly seems fair for NASA to hog the limelight. We are usually offering data from satellites, not ships, moorings, or gliders. There are partner agencies in the U.S. Government who make enormous contributions to the physical oceanography enterprise. In D.C., oceanographers know these agencies as “the four N’s” – NASA, the National Oceanic and Atmospheric Administration (NOAA), the National Science Foundation (NSF), and the Navy. Because each, in its own way, contributes to the success of physical oceanography in the USA and of SPURS in particular, I am going to try to tell you about them through their contributions and through relevant posts from the field. With this post, I am going to focus on NOAA.

The 5-cent summary is that NOAA Pacific Marine Environmental Laboratory (PMEL) is proving two moorings for SPURS and the NOAA Atlantic Oceanographic and Meteorological Laboratory (AOML)  is providing enhancement to their ongoing basin-wide observing system.

One way we divided us SPURS so that we could look at all the relevant time and space scales of salinity variation (minutes to years and inches to thousands of miles), was by looking at who was strong in particular areas. NOAA is the key agency when it comes to monitoring the global ocean with measurements in the water. They maintain moorings in the tropical oceans for seasonal climate prediction, Argo floats around the globe for monitoring of upper ocean temperature and salinity profiles, a global array of surface drifters for sea surface temperature and surface velocity maps….and the list goes on.

The ocean involves so many different interacting processes that no single observing tool captures the whole picture (the variety of instrumentation in SPURS is a good example). We find that different kinds of measurements used together give a more well-rounded vision that is fuller than the simple sum of the individual parts. A focused process study like SPURS takes advantage of this, and NOAA scientists were eager to be part of it. While NOAA maintains long-term monitoring arrays that record broad fluctuations, those don’t necessarily illuminate the processes that underlie the fluctuations, so the diverse measurements in SPURS add interpretive value to NOAA’s arrays. SPURS is also a testing ground to learn what particular instruments measure well (and what they don’t), and to hone sampling strategies. When we deploy Argo floats and surface drifters in SPURS, these measurements enhance our knowledge of salinity in our study area, but the instruments will also remain in place for years to come and contribute to the Atlantic Ocean monitoring array maintained by NOAA.

AOML started a new XBT transect between Cape Town and New York City (referred as AX08) on August 18, with XBTs deployed every 15.5 miles (25 kilometers). This is the third of five AX08 realizations that will be done on 2012. There are five realizations planned for 2013. A total of 550 XBTs are deployed on each realization. 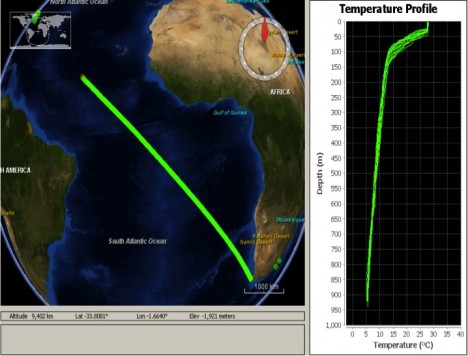 A planned NOAA expedition to in September with some SPURS-related activity had to be postponed due to mechanical malfunction of the ship, the R/V Ron Brown.

It’s very exciting for us to help PMEL by deploying two of their “Prawler” (Profiling Crawler) moorings in SPURS. The Prawler uses the motion of the waves to provide lift for free: each time a wave lifts the mooring, the instrument holds tight to the wire with a ratchet and goes up. When the wave trough passes, the ratchet releases and the round fin keeps it from going down, so it “crawls” up the wire in steps. When it gets to the top, it free-falls back down the wire, making a profile of temperature and salinity. Since battery power is one of the main limiting factors in designing ocean instruments, the Prawler’s use of wave energy lets it work for much longer than if it had to carry a large battery pack and motor. A full and fascinating description is available here. 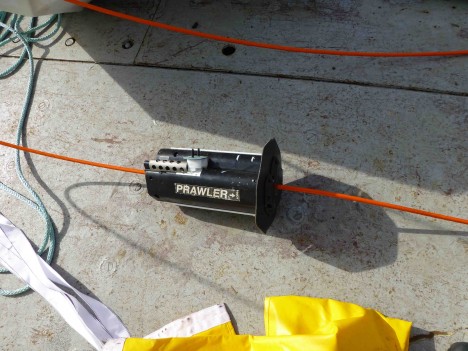 A Prawler on a wire.

To summarize, in order for NASA to advance the science of physical oceanography, we work closely with other federal agencies, such as NOAA, to bring the correct mix of measurements and technology to the field. SPURS is most definitely a team effort!

This entry was posted on Thursday, September 20th, 2012 at 5:37 pm and is filed under Salinity Processes in the Upper Ocean Regional Study (SPURS). You can follow any responses to this entry through the RSS 2.0 feed. Both comments and pings are currently closed.