Profiling Salinity from the Ship

A workhorse of our voyage is the two primary means of measuring salinity from the ship. We use two different Conductivity, Temperature, and Depth (CTD) instruments. One is used on station, when the ship is stationary and the other is used while we are underway (smartly dubbed the underway CTD). Remember that salinity is directly related to conductivity, so each of these instruments provides salinity profiles. On station, the CTD package can be lowered (via winch) all the way to the ocean bottom and is capable of also collecting water samples at 23 different levels. The underway CTD is a small, self-contained unit that makes measurements to only 1300 feet (400 meters) depth and it’s deployed on the end of a string and recovered using a small electric reel. 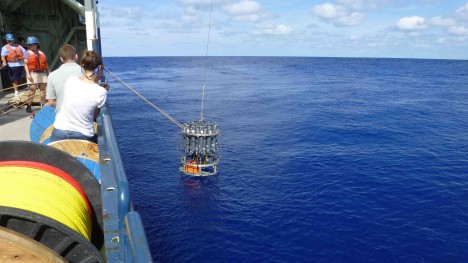 Jeff, holding the underway CTD unit prior to deployment.

Gradually, over the course of many days, we will be able to map the upper ocean salinity and temperature fields from the individual profiles. 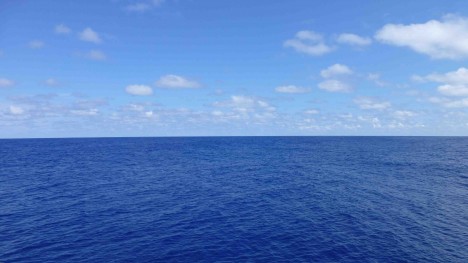 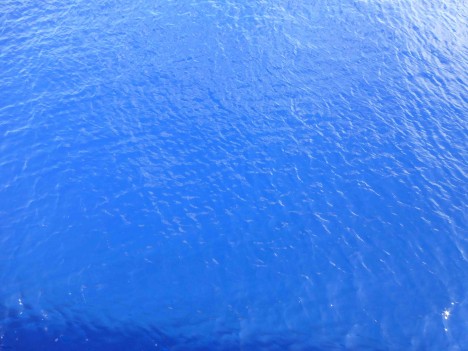 We love the color of the Sargasso Sea.

Everyday in the Sargasso Sea we see flying fish. They are best seen leaping from the bow wave of the Knorr and flying hundreds of feet to escape the ship. They are adapted to escape predators with their speedy swimming and wing-like fins that allow them to stay airborne when they leap out of the water. It’s a show that is always available while we are underway. We just go to the bow and watch for a few minutes. I have not yet heard reports of whales or large fish observations. I did see one small school of smaller fish go by quickly while underway. It’s always fun to take a few minutes to just watch the ocean. There are plenty of things to see, if only you are prepared to observe them!

When we start 24/7 operations later in the week we will have deck lights on at night and that provides another observing opportunity. The lights may attract fish and squid to our locale. More on that next week!

This entry was posted on Thursday, September 13th, 2012 at 11:49 am and is filed under Salinity Processes in the Upper Ocean Regional Study (SPURS). You can follow any responses to this entry through the RSS 2.0 feed. Both comments and pings are currently closed.