Of ship meals and science 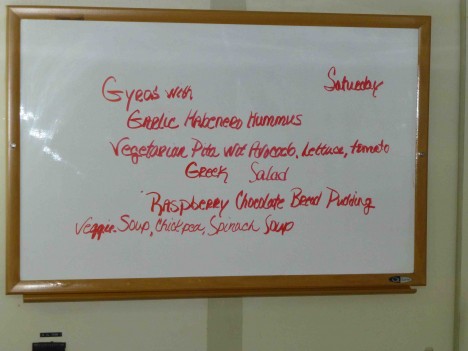 Saturday, 8 September 2012 — Given the talk around the Knorr’s dinner table, you would have to say that oceanographic expeditions run on their stomachs. Key to surviving weeks away from home and family is good food and good moods. The food on the Knorr is excellent, so we are likely to have happier people and better results. Most people will come back a few pounds heavier. There is a gym on the ship but it can be dangerous to be on a treadmill or lifting weights in rolling seas…so, more than likely most will lose the weight battle to the dining experience! 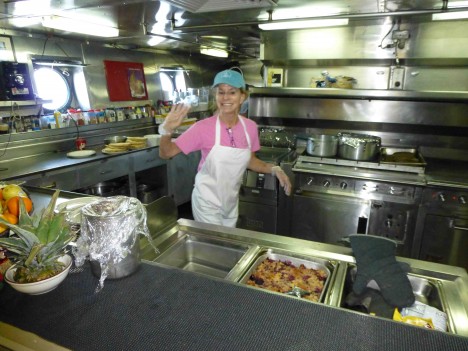 Everyone has a mug.

Today was the day we passed in front of the predicted track of Hurricane Leslie. We felt a bit of the swell coming from the storm, but otherwise we had fine conditions. In the early afternoon, we slowed for a few minutes to deploy the first Argo float of the voyage. Deploying the floats is pretty easy since they have all been powered up and are ready to go right out of the box. We just have to slow the ship and lower the instrument over the stern and gently into the water.

We plan to deploy two Argo floats in front of the predicted hurricane track. They will measure temperature and salinity profiles before, during, and after storm passage. In addition the profiling instruments “listen” to ocean acoustics and can make an estimate of wind speed and rain rate based on the noise of those actions on the sea surface (pretty cool!) So, we especially wanted to see how the acoustic sensors deal with a big signal like a hurricane. Steve Riser at University of Washington is the Principal Investigator for the Argo floats in SPURS. 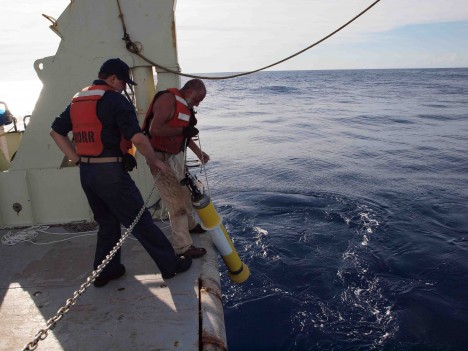 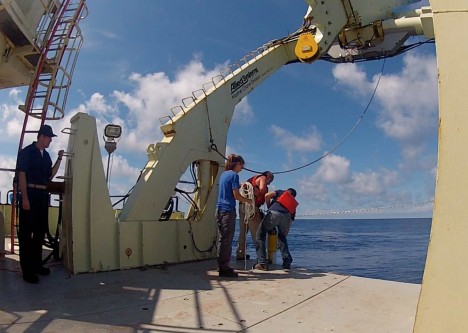 The float disappears over the stern.

I also received my first official science training of the voyage. We have a small device called an underway CTD  for measuring a profile of conductivity, temperature, and depth of seawater. Two people will work together to deploy and recover this instrument on an hourly basis throughout most of the experiment. The device is tethered to a small winch and boom (like a fishing rod and reel) at the stern of the vessel and dropped in the water to make measurements from the surface to 400 meters (about 1312 feet) depth while the ship is steaming at 10 knots. It finishes a profile in 100 seconds and is then reeled back aboard. It is kind of like hauling in a fish with an electrically-powered rod and reel. It takes 20 minutes to haul in the beast and then another few minutes to download the data from its internal memory to a laptop computer. We plan to deploy this instrument every hour once we begin normal operations in the SPURS region next Friday.

The latest wind and wave information from Hurricanes Leslie and Michael suggest that our path to the SPURS site is just about perfect for seeing the minimum impact from the storms. The seas are still lumpy, but Knorr looks to be slipping through the gap between the storms. Fingers crossed!

This entry was posted on Monday, September 10th, 2012 at 11:14 am and is filed under Salinity Processes in the Upper Ocean Regional Study (SPURS). You can follow any responses to this entry through the RSS 2.0 feed. Both comments and pings are currently closed.