The transition from a remote-area scientific expedition to everyday life comes fast and hard.  Even though the flight from Tura to Baltimore consumes over 24 hours, those are the last slow moments that the scientist will experience.  The moment the aircraft touches down, the race begins.  It is a race not only to recover a daily routine that has become foreign while in the field, but also a race to catch up on the set-aside responsibilities of family and friends, and everyday life. 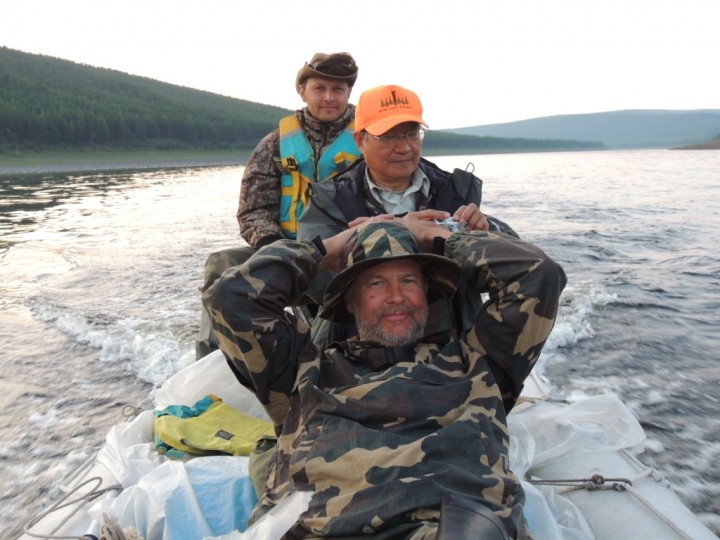 The scientists relax on the Kochechum River on the last day of the Siberia 2012 Expedition. The last day was long, but peaceful. When they arrived in Tura, they heard the news that the rivers were so low that ships that supply the town could not navigate the rivers, so many supplies in the town were running low. From back to front: Pasha Oskorbin, Guoqing Sun, Ross Nelson.

On the Embenchime, life was simple and direct.  In Siberia all efforts were focused on food, shelter, transportation, and making scientific observations and collecting data.  But in America, life is fast, distracting and complex.  From the moment of return, there are bills to pay, meetings to attend, past due work to accomplish, and so much more. The clamor can be overwhelming.   It takes several weeks to emerge from the transitional hubbub.

Our scientists left the dry Siberian rivers on July 22, and the American contingent returned home shortly after.  Jon Ranson and Ross Nelson stepped off the airplane from Russia late on July 24, and were back at their office jobs early the next day.  Gouqing Sun took a short amount of personal time in China to visit relatives before returning to America about a week later.  Now, nearly three weeks later, the scientists finally have a moment to recap their days on the Embenchime.  Dr. Jon Ranson and Dr. Slava Kharuk send the following closing thoughts.

Our travels for the 2012 Siberia expedition are now complete.  Everyone has returned to their families in Russia or the United States.  Life as we know it is returning to normal.  I have lots of memories (and field books full of observations) of the many faces of the larch forest in Siberia.  But the common face of the forest can be summed in one word: change.

Whether viewed from helicopter, boat or on foot, huge areas of forest show the effects of fires.  Some fires are recent, but most burned a couple of decades in the past. Because of how remote those forests are, and given the absence of people, most of these fires were likely caused by lightning.  In many places the larch forest regrows, in some places it does not.  We thought we understood how larch forests regenerated, but this change we’ve seen – some stands do not appear to be regenerating – certainly calls for study. 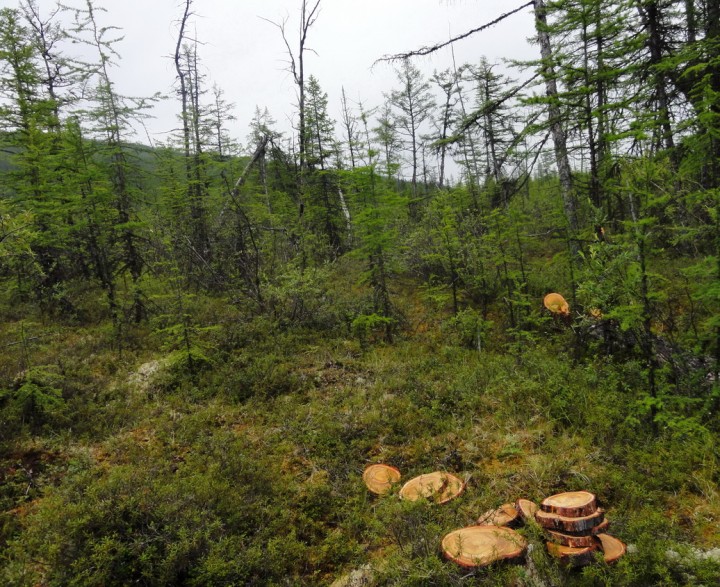 One of the changes observed in the larch forest was the significant amount of burned area. Fires appear to be returning to these forests more frequently than they have in the past. The samples collected on this expedition (in the foreground) will help quantify the fire-return intervals in the Siberian larch forest.

In any given area, there has been a trend for less time between fires – the fire return interval is changing.  Professor Kharuk’s additional analysis on the fire scar samples will quantify this trend.   Change is also occurring in the form of soil slumps and landslides as thawing permafrost allows whole hillsides of forest to slide down into the river.   More subtle changes are the accelerated growth of individual trees in this area from the warming climate.  Our field data should reveal and help quantify those changes.  Our task ahead is to develop methods that take what we are learning about the larch forests in these central Siberia expeditions and apply it to the whole of the forest with aircraft and satellite remote sensing.  Then we will know better the extent and the consequences of these changes.

This is our ninth joint expedition with our Russian colleagues in the Siberian forests.  These expeditions take a lot work in planning, in executing the expedition on-site, and then in analyzing the data.  Success depends in large part on uncontrollable things like airline schedules, weather and durability of equipment.  But the primary key to success is the dedication of the expedition team – each scientist must fully commit themselves to stay focused on our goals and to overcome whatever challenge comes our way.

The joint scientific effort between NASA and Sukachev has endured for over two decades mostly because of the commitment of the scientists involved.  Everyone, (including our sponsors) understands the scientific importance of gaining firsthand information about these forests, and everyone is dedicated to making the most of this opportunity.  In addition I think we all have a sense that these expeditions, while challenging, can be seen as an adventure, and are essential to help us to be “grounded” in our science when back at the office.

We appreciate everyone who has looked in on this blog, and who have followed our personal and scientific journey on the Embenchime this year.  There is much more work to do in this region – and we will return next year.  In 2013, we will not only be making ground measurements, but we will also be flying multiple instruments (lidars, and hyperspectral and thermal cameras) to help us better quantify the changes in the larch forest.  We hope that you will come along with us, again, via the Earth Observatory.

This was our third remote river expedition with NASA’s scientists to larch dominated communities. We crossed larch forests by boating on Embichimo River. Helicopter and boat are the only means to get the study area. The Embechimo is a consequence of rapids, rough waters and “lake-like” surfaces, with underwater boulders which lie in ambush to crush boat engines. Our only hopes for relief were additional water from tributary rivers. 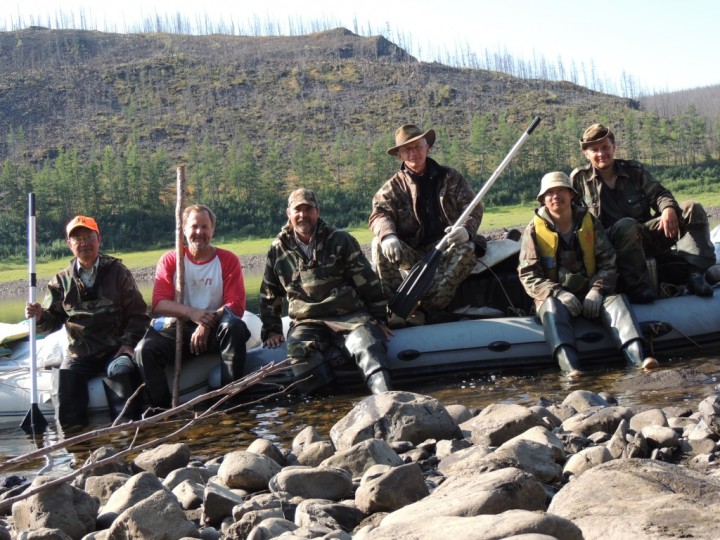 The 2012 Siberia crew at the end of the expedition. From left to right: Guoqing Sun, Ross Nelson, Jon Ranson, Slava Kharuk, Sergei Im, Pasha Oskorbin. This team plans to return to the region in 2013, bringing new instrument technology to help collect data required to understand the changes which are occurring in the larch forests of Siberia.

But those tributaries were almost dried out: hot!  It has been unusually hot … and so many forest fires, too. “Dry” thunderstorms caused fire ignitions over a millions hectares. The landscapes along the route were regenerating burns of different post-fire ages.  We saw successions from seedlings embedded into “battle field” of mortal trees up to mature forests. The history of these “battles” was imprinted in burnmarks on the surviving and dead boles.

In a changing climate, larch forests contain a number of challenging questions.  To answer these questions, expedition studies and in-lab analysis are needed.

Since the expedition has passed, my dreams are still about larch forests, fire burns, moose and caribou watching with wide-open eyes the approaching expedition boats… and a nightmare of rough waters, rapids and hidden underwater boulders.  We will return once again, next year.

This entry was posted on Wednesday, August 15th, 2012 at 8:43 am and is filed under Siberia 2012 – Embenchime River Expedition, Uncategorized. You can follow any responses to this entry through the RSS 2.0 feed. Both comments and pings are currently closed.