The only wildlife we saw during our three-week traverse was three snow petrels and one Antarctic petrel. I still haven’t decided if they were sort of a Christmas gift, or the announcement of a storm!

The birds visited us when we were at camp 5,430 km (265 mi) inland. I was surprised to see them so far away from the coast and once I was back at McMurdo, I looked for a bird specialist on base and found Dr. David Ainley, who gave me some info about the birds that I want to share with you.

Snow petrels are all white except for their black eyes, eyelashes and feet/legs. 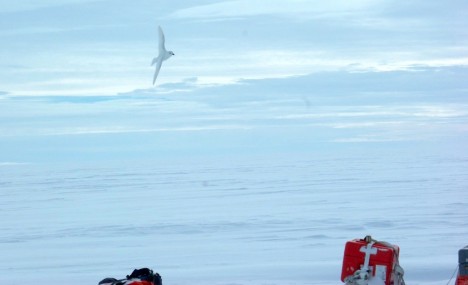 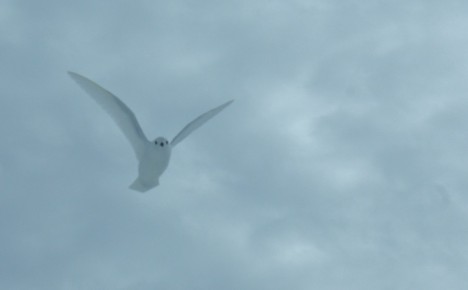 The Antarctic petrel is mostly black though white below and with white trailing edges to wings, it has pink legs and black feet. Unfortunately, we didn’t have the time to take pictures of this bird, so we simply enjoyed watching it.

These two species are seabirds. They never leave the Antarctic (that is, they never fly north of the Antarctic Polar Front) and spend most of their lives at sea, mainly associated with sea ice. Adults spend about four months of the year nesting. They build their nest in cavities in the slopes of inland nunataks (exposed rocks in ice fields or glaciers) and mountaintops. Most of these birds’ breeding areas are still unknown to the scientists studying them, though they are known to nest in the Fosdick and Ford ranges in Marie Byrd Land.

Our traverse was on Mary Byrd land, where, as I mentioned above, many petrels breed. So the birds we were lucky to see weren’t lost, as I had initially thought, but flying from or returning to their nests.

This entry was posted on Friday, February 10th, 2012 at 1:58 pm and is filed under SEAT: Satellite Era Accumulation Traverse. You can follow any responses to this entry through the RSS 2.0 feed. Both comments and pings are currently closed.