A Week of Woeful Weather

This is Joanne Howl, the writer for this blog.  Normally I take a back seat, not speaking myself but sharing the stories that the science team brings to me each day.   Today I wanted to take a moment to speak as myself.

After a week layoff, the team is back in the air today. I haven’t heard from the field, yet and it’s pretty late.  I think that means they’ve had a very long day.  Work comes first – they have to complete their science objectives before taking the time to call and share their stories.  I’m sure we’ll hear before long. Meanwhile, we have some catching up to do.

The past week has been a quiet one for the blog, because there were no flights.  On Friday last week, Rafael and his crew returned from a very successful flight towards the north.  They collected data from Howland, Maine, Bartlett Forest, New Hampshire and from sites in Quebec.   Field experiments with instruments in development rarely go smoothly, and there were glitches and hiccups during the last week as expected.  But, thanks to a lot of hard work and dedication, the teams gathered a good amount of excellent data and much is being learned about the instruments.

During the last flights, the DBSAR (radar) instrument had some glitches keeping up with the data load.   It would drop data on occasion, although it still captured enough data to be very useful.  But this glitch has been puzzling – and frustrating – for the team.  The instrument performed perfectly in the lab and in the grounded aircraft.  The problem only showed up in flight, and then not all the time.   Intermittent problems are the hardest to solve, of course, especially when you need to be in the air to see the problem, and on the ground to fix it!   They had worked hard on the problem, and DBSAR was performing better each flight as well as collecting good data.

The CAR instrument stopped working on the final day of last week’s trip as well.  The CAR team was quite sure that it could be fixed completely and quickly – but they had to be on the ground to make the fix.

So when the science and engineering team landed on Friday, they headed home anticipating a full holiday weekend of work.  They knew that they had instrument issues to tweak and data to analyze before they resumed flights on the Tuesday after Labor Day.  They did work – very hard – and the instrument issues were nearly ironed out on Tuesday.  The weather, however, wasn’t cooperative. 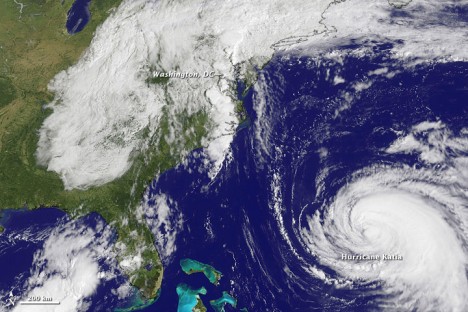 On September 1, Tropical Depression 13 formed in the Gulf of Mexico.  As it strengthened and became Tropical Storm Lee, it was predicted to be a slow-moving rainmaker, but not too troublesome.   As Lee made landfall on September 3, rain-filled convection bands stretched far northward.   By September 5th, it was only a remnant of a Tropical Storm, but the clouds stretched along most of the eastern coast of the United States.

The remnants of Lee became merged with a stalled frontal system as  Hurricane Katia was pushing north and west over the Atlantic Ocean, blocking Lee from escaping eastward and moving offshore.  The winds from Lee and Katia pulled large amounts of moisture from the Gulf of Mexico and the Atlantic.   The remnants of Lee dumped torrential rain as it plodded northward – weekly rainfall totals topped 10 inches across eight states.  Elizabethtown, Pennsylvania recorded 15.37 inches for the week and the unofficial total at my home, south of Annapolis, Maryland, was  14 inches.  The region had already been soaked by the rain from Hurricane Irene the week before, and the ground could not absorb the water.  Rivers overflowed and in some areas, flooding was intense.

The clouds and dousing rain from the remnants of Lee effectively covered almost all of the target sites in New Hampshire, Maine, Pennsylvania, Maryland and North Carolina.   CAR and SIMPL don’t do well with cloud cover – and the clouds were substantial all week long.   Most of the areas also were substantially flooded.  The instruments respond to wet foliage differently from dry foliage.   In radar, you get more backscatter return from wet surfaces.  That can be worked with, but it is an additional variable that must be analyzed.   Standing floodwater creates another set of issues, because the water surface reflects radar waves differently from a wet surface, and very much differently than a dry surface.  The science team could make adjustments for this, but flooded land creates variables and increases uncertainties.

In order to fly a science mission, one needs a sound and ready aircraft, working instruments and cooperative weather.   By Tuesday, the aircraft was ready and the crew was willing.  The CAR instrument was fixed and sound, and the DBSAR had been tuned up and was ready for another flight.   But the weather – that difficult weather – was totally uncooperative.    The decision was made to hold the flights until the weather was willing to cooperate.

Today the weather is clear and much of the flood waters have receded.  The plan was to leave Wallops Island, Virginia very early, fly some sites in Maryland and North Carolina and then transit to Florida.   The team planned an extremely long day with little rest.   We’ll hear from the team shortly and share the story as we hear it.

This entry was posted on Monday, September 12th, 2011 at 10:22 pm and is filed under Eco3D: Exploring the Third Dimension of Forest Carbon. You can follow any responses to this entry through the RSS 2.0 feed. Both comments and pings are currently closed.