Hike to the Ice Cap

With three sea ice flights successfully behind us, and the airport being closed on the weekend, we had a day off from operations, and took advantage of the great activities that are coordinated by the Community Center here at Thule AFB.  Today’s trip was a hike to the Ice Cap.  About two dozen folks (mixture of Air Force Personnel, Danish Workers, and NASA IceBridge Team Members) piled into 4×4 trucks, and headed off base about 20 minutes drive.  The last 5 minutes of the drive was “off-road” and we went as far as we could until 2 trucks got stuck in the snow.  After a few minutes of shoveling and getting everyone back on sturdy ground, we took off for the 45 minute hike to the ice cap. 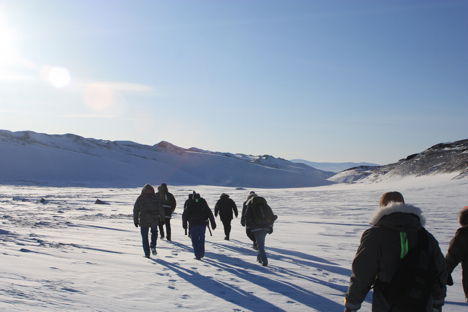 Heading out on our hike towards the Ice Cap. Credit: LCDR Woods

It was a pleasant walk, over mostly hard ground, with some areas of soft snow making for a good work out.  We took several short breaks to stop and listen.  The silence was incredible.  There was no breeze, and absolutely no noise.  No cars, no power poles, no animals (that we could see at least), just absolute silence.  It was a very cool experience.  We arrived at the area where the ice cap is exposed, and took some photos.  The exposed blue, white, and brown banded ice was another breathtaking sight that I had never experienced before.  After another few hundred yards down the trail, we arrived at the sledding hill with another amazing vantage point after climbing to the top. 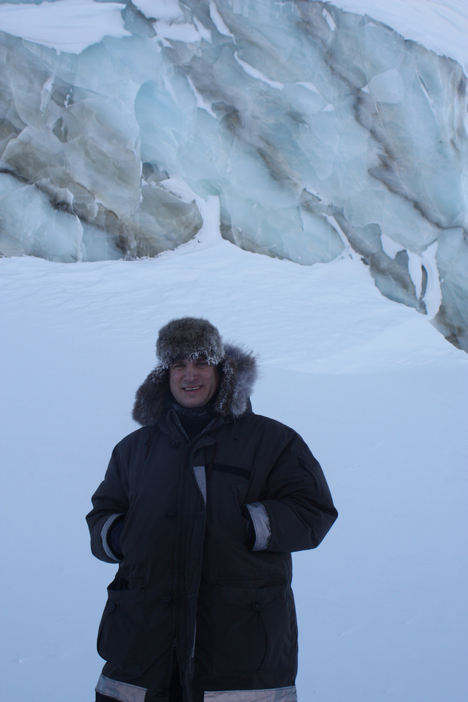 LCDR John Woods stands in front of the exposed ice cap, in which bands separate the different layers of ice. Credit: LCDR Woods

On the walk back, I found some fox tracks in the untouched snow that made for a great photo.  There was no sign of the fox around, just for its left over paw prints in the fresh snow. 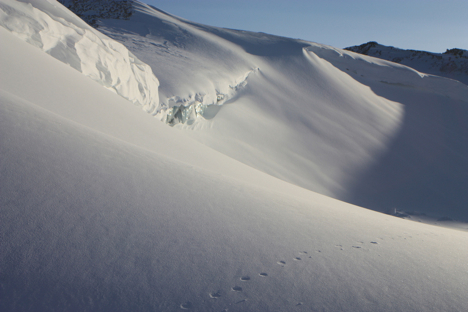 Fox tracks cut through the otherwise undisturbed expanse of the snow in front of the ice cap. Credit: LCDR Woods

We finished the walk with some Hot Chocolate and cookies, warming up and swapping stories about each person’s favorite part of the hike.

This entry was posted on Friday, March 25th, 2011 at 2:17 pm and is filed under Operation IceBridge, Operation IceBridge: Arctic 2011. You can follow any responses to this entry through the RSS 2.0 feed. Both comments and pings are currently closed.