Today was the day I had been waiting for all week. It was the first flight day of the IceBridge operation out of Thule, Greenland.  Flying today had a special meaning to me for a few different reasons.  I recently was selected to become a Navy pilot, which is a goal I have been working towards for some time. Therefore, upon completion of graduate school, I will report to Pensacola Florida and begin flight training. I was able to talk to the pilots, flight engineers and air crewmen of the NASA P-3B who happen mostly ex-Navy guys which was a pretty cool experience for me. So not only was I constantly interacting with the scientists and engineers, but with the people actually flying the aircraft and allowing the mission to happen in the first place.

The day started early because we had to report to the aircraft by 0700, so I woke up got breakfast and headed right over to the hanger. 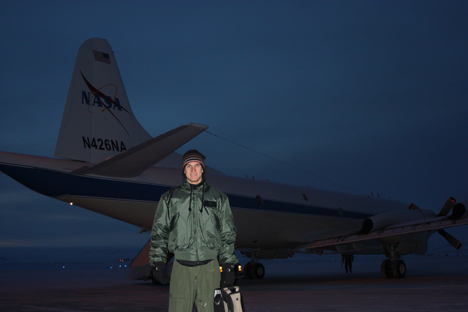 This is a picture of me in my flight suit and flight jacket getting ready to board the aircraft early in the morning. Credit: LCDR John Woods

The actual flight, although a long mission, was nothing short of amazing.  We flew a path known as “Connor Corridor,” a flight taking us from Thule to north of the Canadian Archipelago.

This was a “ENVISAT” mission meaning we would be flying over the sea ice and actually going over a region that an ESA ENVISAT satellite would look at later in the day.

This was really interesting for me since I am studying the sea ice variation in the Arctic; therefore it was cool getting to see firsthand what I am reading about in books and learning about in my classes. 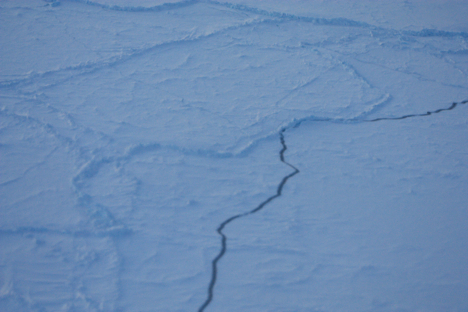 This is a picture taken looking out the window of the P-3B as we flew at 1500 feet. It was very cool getting to see open leads and ridges as the picture shows. This appears to be multi-year ice because the ridges seen in the picture are weathered indicating that they have been there for multiple years. Credit: LCDR John Woods

Not only did I get to see some amazing scenery, I also learned a lot from the people taking measurements onboard.  On the P-3B, there is a gravimeter, a few airborne topographic mappers (ATMs), some cameras for the digital mapping system (DMS), ku-band radar, snow radars, MCoRDS radars and a magnetometer. All of this equipment is collecting data and in fact a lot of the instruments’ measurements are used together with other equipment in order to give the most accurate depiction of the Arctic as possible.

We landed around 1600, making it about an 8-hour mission!  Although it was long, it was an experience I will remember for a lifetime; I am excited to fly again tomorrow, hopefully the weather will hold out and let us get in the air once again.

This entry was posted on Thursday, March 24th, 2011 at 5:49 pm and is filed under Operation IceBridge, Operation IceBridge: Arctic 2011. You can follow any responses to this entry through the RSS 2.0 feed. Both comments and pings are currently closed.