Another early morning wake up, with a quick check of the weather.  I went to bed last night with snow falling, and not so promising satellite pictures showing a fairly significant storm system off to our west.  I was thinking that we would be cancelled due to weather, but woke up to surprisingly calm conditions. The system skirted by us to our west and headed due south rather than east. The weather conditions here in the Arctic are much different from home, and I am still trying to figure out how the weather systems move about the area. I created a picture from this morning’s satellite image, with approximate locations of Thule, and our proposed flight path. You can see the major part of the weather was to our west, and we had some high clouds in our operating area to the north towards the pole. 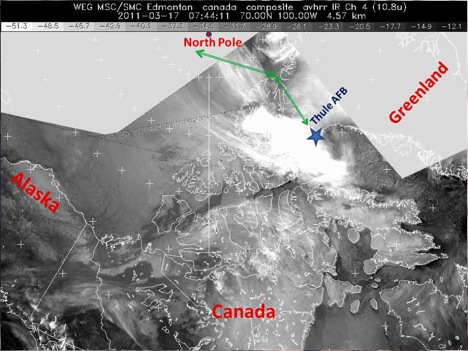 IR Satellite Image from 0444 local. Large area of cloudiness to west of Thule, but cleared out by our departure at 0815 local. Area of high clouds near the flight path in vicinity of North Pole, that we went down to 1,000 feet to get under. Imagery is courtesy of Environment Canada

Today’s mission was another satellite underpass track, this time for the European Space Agency CRYOSAT platform.  Take off was under relatively clear skies, and we got some great views of the surrounding mountains and glaciers around Thule.  I am told that this was nothing compared to the upcoming land ice flights, but I was still in awe with the beauty of the ice flowing towards the sea, and the morning sunrise reflecting off the snow covered mountains.  The calving front was clearly visible from our low altitude just after take-off.  This is the area were the land ice meets the water, and at this time of year the water is still froze, so the sea ice sort of acts like a buffer to hold up the glacier.  During the summer months, the sea ice retreats due to the warmer air temperatures, and the glacier flows freely into the water, and calves into icebergs. 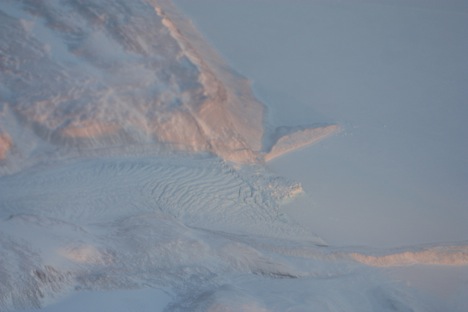 About an hour and half into our flight, we reached the beginning of the data collection line.  We dropped down to 1500 feet in attempt to get under the clouds to allow the instruments on board to collect data. Today, the cloud deck was down around 1,000 feet, so we had to fly below that level. This made for some spectacular viewing of the sea ice conditions.

After about 2 hours of flying our survey line, we had reached approximately 87.5 degrees north, only 150 miles from the North Pole.  The P-3 made a wide S turn to back track on the same line that we covered on the way out. This gives the instrument teams, twice the data to be compared to the satellite that would be passing over our heads, taking similar measurements. Another 2 hours of data collection on the way back, and now we have just broken off the survey line and are heading back to base.

Happy St. Patrick’s Day everyone!  I have yet to see a single sign on base advertising any sort of celebration, so we might just have to create our own. Midshipman Brugler departs tomorrow morning on the rotator flight back to BWI airport, so we will go out in search of some congratulatory Corned Beef in honor of his departure. I will be staying on here in Thule for at least one more week, hoping to get on the flight across the Arctic to Fairbanks, Alaska to survey the Navy Ice Camp. Weather permitting of course!

This entry was posted on Thursday, March 24th, 2011 at 5:50 pm and is filed under Operation IceBridge, Operation IceBridge: Arctic 2011. You can follow any responses to this entry through the RSS 2.0 feed. Both comments and pings are currently closed.