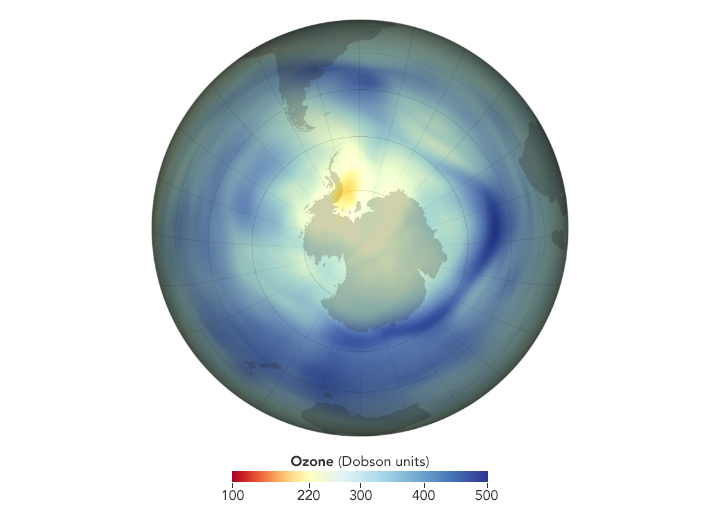 The stratospheric ozone layer protects life on Earth by absorbing ultraviolet light, which damages DNA in plants and animals (including humans) and leads to sunburns and skin cancer. Prior to 1979, scientists had not observed atmospheric ozone concentrations below 220 Dobson Units. But in the early 1980s, through a combination of ground-based and satellite measurements, scientists began to realize that Earth’s natural sunscreen was thinning dramatically over the South Pole each spring. This thinning of the ozone layer over Antarctica came to be known as the ozone hole.

This series of images shows the size and shape of the ozone hole each year from 1979 through 2019 (no data are available for 1995). The measurements were made from 1979–2004 by NASA’s Total Ozone Mapping Spectrometer (TOMS) instruments; from 2005–2011 by the Royal Netherlands Meteorological Institute’s Ozone Monitoring Instrument (OMI) (which flies on NASA’s Aura satellite); and from 2012-2019 by the Ozone Mapping Profiler Suite (OMPS) on the NASA/NOAA Suomi NPP satellite. Red and yellow areas indicate the ozone hole.

The series begins in 1979. The maximum depth of the hole that year was 194 Dobson Units (DU)—not far below the previous historical low. For several years, the minimum concentrations stayed in the 190s, but then the minimums rapidly grew deeper: 173 DU in 1982, 154 in 1983, 124 in 1985. By 1991, a new threshold was passed, as the ozone concentration fell below 100 DU for the first time. Since then, concentrations below 100 became more common. The deepest ozone hole occurred in 1994, when concentrations fell to just 73 DU on September 30.

Records in depth and area have never occurred during the same years (the largest ozone hole occurred in 2006), but the long-term trend in both characteristics is consistent: from 1980 through the early 1990s, the hole rapidly grew in area and depth. In the early years of the 21st century, annual ozone holes roughly stabilized (see the Ozone Hole Watch website for annual averages). Year-to-year fluctuations in area and depth are caused by variations in stratospheric temperature and circulation. Colder conditions result in a larger area and lower ozone values in the center of the hole.

The ozone hole opened the world’s eyes to the global effects of human activity on the atmosphere. Scientists found out that chlorofluorocarbons (CFCs)—long-lived chemicals that had been used in refrigerators and aerosol sprays since the 1930s—had a dark side. In the layer of the atmosphere closest to Earth (the troposphere), CFCs circulated for decades without degrading or reacting with other chemicals. When they reached the stratosphere, however, their behavior changed. In the upper stratosphere (beyond the protection of the ozone layer), ultraviolet light caused CFCs to break apart, releasing chlorine, a very reactive atom that repeatedly catalyzes ozone destruction.

The global recognition of the destructive potential of CFCs led to the 1987 Montreal Protocol, a treaty phasing out the production of ozone-depleting chemicals. Scientists estimate that about 80 percent of the chlorine (and bromine, which has a similar ozone-depleting effect) in the stratosphere over Antarctica today comes from human, not natural, sources.

Models suggest that the concentration of chlorine and other ozone-depleting substances in the stratosphere will not return to pre-1980 levels until the middle decades of the 21st century. Scientists have already seen the first definitive proof of ozone recovery, observing a 20 percent decrease in ozone depletion during the winter months from 2005 to 2016. In 2019, abnormal weather patterns in the upper atmosphere over Antarctica dramatically limited ozone depletion, leading to the smallest hole since 1982. Models predict that the Antarctic ozone layer will mostly recover by 2040.