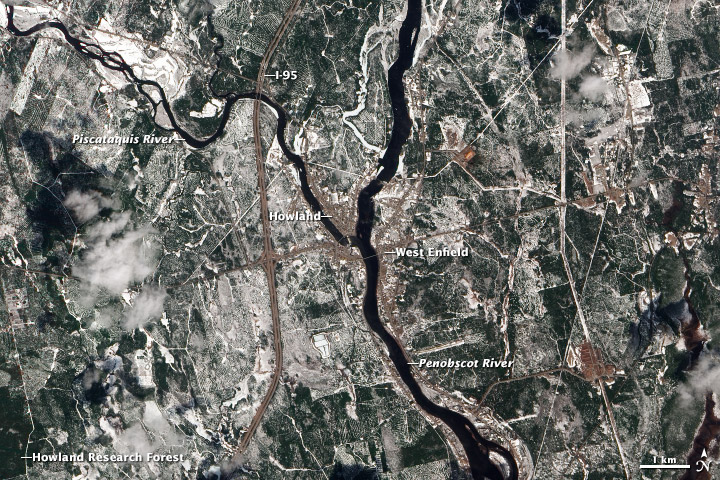 The middle latitudes of the world—between the tropic lines (Cancer and Capricorn) and the polar circles (Arctic and Antarctic)—have seasons of weather and a wide diversity of landscapes and vegetation. But not many mid-latitude locations have year-round greenery and four distinct seasons, as they do in central Maine.

The Advanced Land Imager (ALI) on NASA’s Earth Observing-1 satellite captured these images centered on the small towns of Howland and West Enfield, Maine. Situated at the confluence of the Piscataquis and Penobscot Rivers, Howland has a population of roughly 1,200 people and West Enfield is home to 1,600. The total rises seasonally when hunters, fishermen, and vacationers come to visit the rivers and nearby Cold Stream Pond. Interstate 95 passes through the area on the way from Bangor to the border with Canada’s New Brunswick province.

The landscape is mostly flat and roughly 70 meters (230 feet) above sea level. The area was buried under rivers of ice during the last Ice Age. Then, when the glaciers retreated, the region was mostly underwater until the land rebounded from the compressing weight of the ice cover. Fossil shells and marine clays can still be found amidst the peat soils, glacial tills, bogs, and wetlands.

The seven images run from April 14 through December 18, 2008, and there are different signs of seasonal change. Though astronomical spring begins on March 20, central Maine was still shedding its blanket of winter snow in mid-April. In May, some of the scene is still dirt brown, signs of farmland, deciduous forest, or shrubland that was still just starting to bud in the raw springtime of New England. By July, the landscape is covered in bright green, a color that deepens slightly by early September. By late September, the leaf trees are changing color; mid-October brings full fall color in the hardwood forests and harvest time on the farms. By mid-December, the rivers are half-frozen and coated with snow, as is the land surface.

The Penobscot River watershed, the second largest in New England (after the Connecticut), has been undergoing a renaissance. Through a partnership between power companies, state and local agencies, conservation groups, and the Penobscot Indian Nation, two dams have been removed in order to restore natural features of waterways that have been dammed for close to two centuries. The Howland Dam—just west of where the Penobscot and Piscataquis meet—will soon be decommissioned and a fish bypass will be built. The goal is to restore habitat for salmon, bass, and other fish that split their year between the river and the Atlantic Ocean.

One constant in the images is the green, as Maine has the highest percentage of forest cover in the United States (about 86 percent). Central Maine lies along the transition between northeastern hardwood trees and softwood coniferous species. The area has long been a rich source of lumber, a major supplier for the United States and the world since the 19th century. Logging is still a key industry, supporting thousands of jobs in the state.

Deciduous trees, such as red oak and white ash, appear to line the rivers and streams and the residential areas shown above. But it is the evergreen trees that dominate the forest canopy, particularly spruce, cedar, hemlock, and white pine. Fir trees were once abundant, but many were wiped out in the 1960s and 70s by budworm infestations. These evergreens hold their color throughout the year and cover much of the landscape, even standing above the winter snowfall.

The patchwork of forest has been a boon to research. On a tract of land southwest of the towns (image lower left), the Howland Research Forest is the site of long-term scientific studies supported by NASA, the National Science Foundation, the U.S. Forest Service, the U.S. Department of Agriculture, and the U.S. Department of Energy. Researchers have observed the effects of acid rain; examined the cycling of nutrients through soils; and continually measured how much carbon dioxide the trees absorb, store, and return to the atmosphere. The Howland Forest is also a key natural laboratory for observing long-term ecosystem changes.