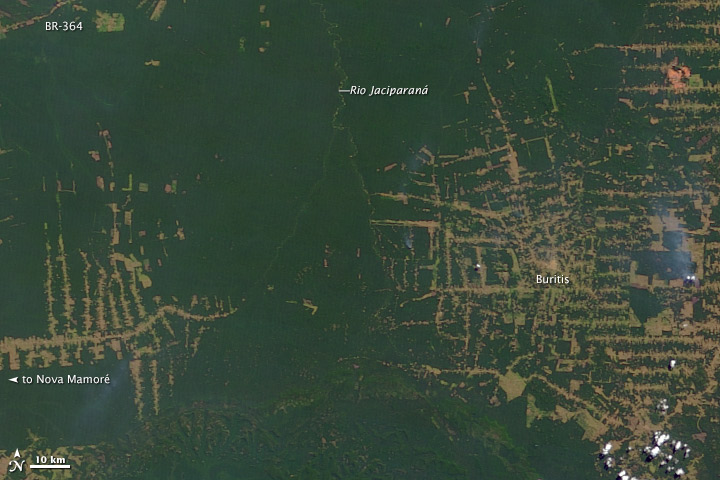 By the start of this satellite time series from the Moderate Resolution Imaging Spectroradiometer (MODIS) on NASA’s Terra satellite, the frontier had reached the remote northwest corner of Rondônia. Intact forest is deep green, while cleared areas are tan (bare ground) or light green (crops, pasture, or occasionally, second-growth forest). Over the span of 12 years, roads and clearings pushed west-northwest from Buritis toward the Jaciparaná River. The deforested area along the road into Nova Mamoré expanded north-northeast all the way to the BR-346 highway.

Deforestation follows a fairly predictable pattern in these images. The first clearings that appear in the forest are in a fishbone pattern, arrayed along the edges of roads. Over time, the fishbones collapse into a mixture of forest remnants, cleared areas, and settlements. This pattern follows one of the most common deforestation trajectories in the Amazon. Legal and illegal roads penetrate a remote part of the forest, and small farmers migrate to the area. They claim land along the road and clear some of it for crops. Within a few years, heavy rains and erosion deplete the soil, and crop yields fall. Farmers then convert the degraded land to cattle pasture, and clear more forest for crops. Eventually the small land holders, having cleared much of their land, sell it or abandon it to large cattle holders, who consolidate the plots into large areas of pasture.

The estimated change in forested area between 2000 and 2008 is shown in this map (above) based on vegetation index data from MODIS. Places that are red lost vegetation, while places that are peach showed little or no change. The most intensely red areas indicate the biggest vegetation losses—usually the complete clearing of original rainforest. Less intense reds indicate less dramatic change, such as the complete clearing of an already logged forest, or a transition from leafy crops to sparser pasture grasses.

All major tropical forests—including those in the Americas, Africa, Southeast Asia, and Indonesia—are disappearing, mostly to make way for human food production, including livestock and crops. Although tropical deforestation meets some human needs, it also has profound, sometimes devastating, consequences, including social conflict and human rights abuses, extinction of plants and animals, and climate change—challenges that affect the whole world.