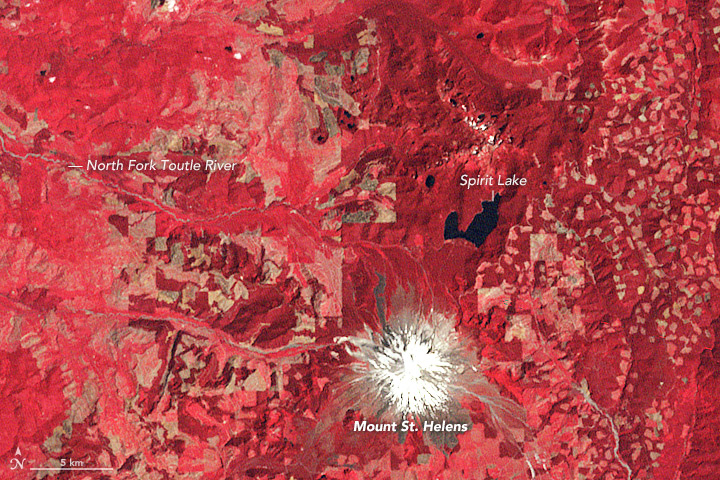 The 1980 eruption of Mt. St. Helens — which began with a series of small earthquakes in mid-March and peaked with a cataclysmic flank collapse, avalanche, and explosion on May 18 — was not the largest nor longest-lasting eruption in the mountain’s recent history. But as the first eruption in the continental United States during the era of modern scientific observation, it was uniquely significant.

In the decades since the eruption, Mt. St. Helens has given scientists an unprecedented opportunity to witness the intricate steps through which life reclaims a devastated landscape. The scale of the eruption and the beginning of reclamation in the Mt. St. Helens blast zone are documented in this series of images captured by NASA’s Landsat series of satellites between 1979 and 2016. The older images are false-color (vegetation is red) because earlier Landsat satellites could not “see” blue light. To make a photo-like satellite image, you need red, green, and blue wavelengths of light.

The May 18 eruption began with an earthquake that caused the northern flank of the mountain to collapse, producing the largest landslide in recorded history. The avalanche buried 14 miles (23 kilometers) of the North Fork Toutle River with an average of 150 feet (46 meters)—but in places up to 600 feet (180 meters)—of rocks, dirt, and trees. In subsequent years, the river re-carved a shallow, braided path through the buried valley.

When the mountain collapsed, it was like uncorking a bottle of champagne: hot rocks, ash, gas, and steam exploded upward and outward to the north. The outward blast spread volcanic debris (gray in the images) over 230 square miles (600 square kilometers) and blew down 4 billion board-feet of timber. A raft of dead trees drifts around Spirit Lake throughout the image series. All around the southern half of the mountain, volcanic mudflows (lahars) poured down rivers and gullies.

Not surprisingly, the first noticeable recovery (late 1980s) takes place in the northwestern quadrant of the blast zone, farthest from the volcano. It is another decade (late 1990s) before the terrain east of Spirit Lake is considerably greener. By the end of the series, the only area (beyond the slopes of the mountain itself) that remains conspicuously bare at the scale of these images is the Pumice Plain.

Ground surveys, however, have found even this seemingly barren area is coming back to life: the first plant to re-appear was a prairie lupine, which can take nitrogen—a critical plant nutrient—straight from the air rather than from the soil. These small wildflowers attract insects and herbivores and they catch blowing leaves and other organic matter. The dead plants and insects, the windblown organic matter, and the droppings of herbivores slowly create pockets of soil on the volcanic deposits. This process is underway on the Pumice Plain, even though it is not yet visible from space.

World of Change: Devastation and Recovery at Mt. St. Helens