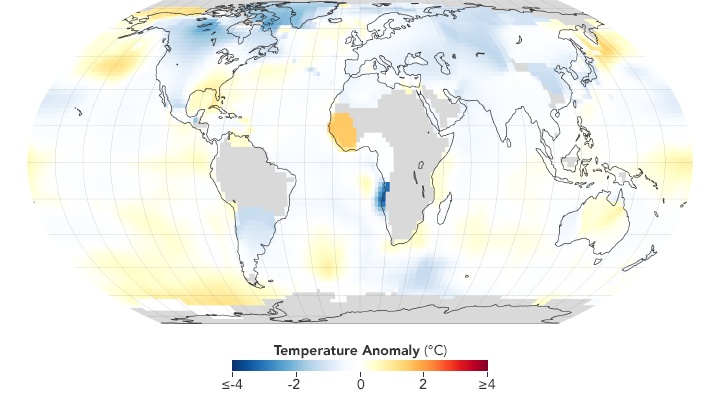 Air temperatures on Earth have been rising since the Industrial Revolution. While natural variability plays some part, the preponderance of evidence indicates that human activities—particularly emissions of heat-trapping greenhouse gases—are mostly responsible for making our planet warmer.

According to an ongoing temperature analysis led by scientists at NASA’s Goddard Institute for Space Studies (GISS), the average global temperature on Earth has increased by at least 1.1° Celsius (1.9° Fahrenheit) since 1880. The majority of the warming has occurred since 1975, at a rate of roughly 0.15 to 0.20°C per decade.

The maps above show temperature anomalies in five-year increments since 1880. (Click on the arrow to run the animation.) These are not absolute temperatures, but changes from the norm for each area. The data reflect how much warmer or cooler each region was compared to a base period of 1951-1980. (The global mean surface air temperature for that period was 14°C (57°F), with an uncertainty of several tenths of a degree.)

The image below shows global temperature anomalies in 2022, which tied for the fifth warmest year on record. The past nine years have been the warmest years since modern recordkeeping began in 1880. 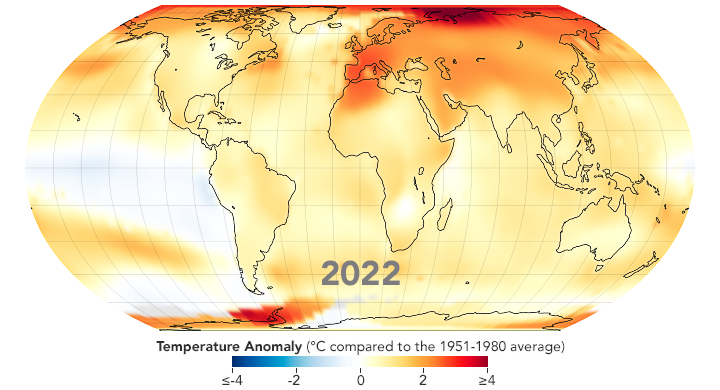 As the maps show, global warming does not mean temperatures rise everywhere at every time by same rate. Temperatures might rise 5 degrees in one region and drop 2 degrees in another. For instance, exceptionally cold winters in one place might be balanced by extremely warm winters in another part of the world. Generally, warming is greater over land than over the oceans because water is slower to absorb and release heat (thermal inertia). Warming may also differ substantially within specific land masses and ocean basins.

In the animation at the top of the page and in the bar chart below, the years from 1880 to 1939 tend to be cooler, then level off by the 1950s. Decades within the base period (1951-1980) do not appear particularly warm or cold because they are the standard against which other years are measured.

The leveling off of temperatures in the middle of the 20th century can be explained by natural variability and by the cooling effects of aerosols generated by factories, power plants, and motor vehicles in the years of rapid economic growth after World War II. Fossil fuel use also increased after the war (5 percent per year), boosting greenhouse gases. Cooling from aerosol pollution happened rapidly. In contrast, greenhouse gases accumulated slowly, but they remain in the atmosphere for a much longer time. According to former GISS director James Hansen, the strong warming trend of the past four decades likely reflects a shift from balanced aerosol and greenhouse gas effects on the atmosphere to a predominance of greenhouse gas effects after aerosols were curbed by pollution controls.

Why should we care about one or two degrees of global warming? After all, temperatures fluctuate by many degrees every day where we live.

The temperatures we experience locally and in short periods can fluctuate significantly due to predictable, cyclical events (night and day, summer and winter) and hard-to-predict wind and precipitation patterns. But the global temperature mainly depends on how much energy the planet receives from the Sun and how much it radiates back into space. The energy coming from the Sun fluctuates very little by year, while the amount of energy radiated by Earth is closely tied to the chemical composition of the atmosphere—particularly the amount of heat-trapping greenhouse gases.

A one-degree global change is significant because it takes a vast amount of heat to warm all of the oceans, the atmosphere, and the land masses by that much. In the past, a one- to two-degree drop was all it took to plunge the Earth into the Little Ice Age. A five-degree drop was enough to bury a large part of North America under a towering mass of ice 20,000 years ago.

Global temperature records start around 1880 because observations did not sufficiently cover enough of the planet prior to that time. The line plot above shows yearly temperature anomalies from 1880 to 2020 as recorded by NASA, NOAA, the Berkeley Earth research group, the Met Office Hadley Centre (United Kingdom), and the Cowtan and Way analysis. Though there are minor variations from year to year, all five records show peaks and valleys in sync with each other. All show rapid warming in the past few decades, and all show the last decade as the warmest.

The NASA GISS team chose the period of 1951-1980 as its baseline largely because the U.S. National Weather Service uses a three-decade period to define “normal” or average temperature. The GISS temperature analysis effort also began around 1980, so the most recent 30 years was 1951-1980. Their objective is to provide an estimate of temperature change that could be compared with predictions of global climate change in response to atmospheric carbon dioxide, aerosols, and changes in solar activity.