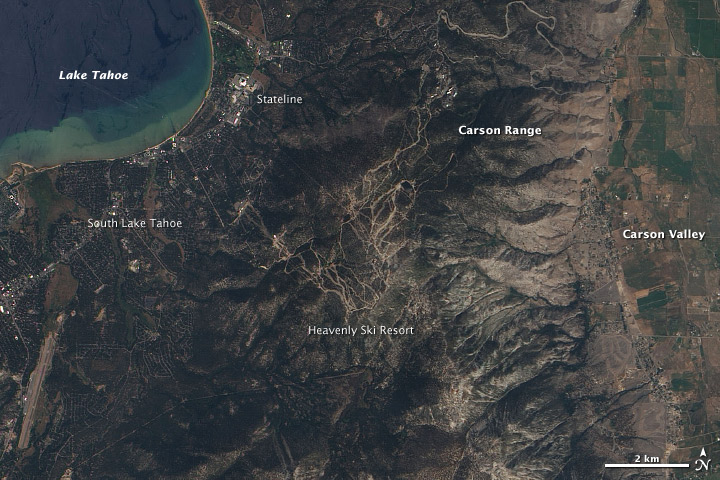 Perhaps the most familiar change in our changing world is the annual swing of the seasons. In the course of a year, all landscapes outside the tropics transform, exchanging light, warmth, and green plants for darkness, cold, and exposed earth. This series of images from the Advanced Land Imager (ALI) on NASA’s Earth Observing-1 (EO-1) satellite shows the changes around Lake Tahoe, on the border between California and Nevada, from August 27, 2009, to September 7, 2010. Snow, plants, light, and the lake itself all shift in accordance with the seasons.

One of the most obvious signals in the Lake Tahoe region is snow, a commodity that draws skiing vacationers from November to April. The high-elevation lake received 37 percent of its precipitation as snow in 2009. At the center of the images is the Heavenly Ski Resort in the Carson Range southeast of Lake Tahoe. The groomed trails are among the first places to turn white when the first snow arrives in October, and they are among the last places to lose snow in June. Snow melts most quickly between May and June, when most of the snow disappears.

The spring also brings rain. The 63 streams flowing into Lake Tahoe swell with rain and snowmelt and sweep sediment into the lake’s unusually clear waters. For most of the year, the water is clear enough that the lake bottom is visible beneath the water near the shore. In the spring, however, dark-colored sediment pours into southern Lake Tahoe from the Upper Truckee River, clouding the view of the lakebed.

Apart from snow cover, the other clear indicator of seasonal change is the lighting. Variations in sunlight drive the seasons, and these changes are notable from image to image. We experience seasons because Earth is tilted 23.5 degrees on its axis. In the summer, the hemisphere tilted toward the Sun receives more direct light than the opposite hemisphere, which is experiencing winter. (See Earth’s tilt is the reason for the seasons for an illustration.) Areas closest to the poles experience the greatest variation in seasons, while those near the equator experience no seasons at all because the angle of sunlight hardly changes throughout the year. At about 39 degrees north of the equator, Lake Tahoe sees each of the four seasons.

The seasonal shift in light is evident in the shadows that play across the images. All of the images were taken at about the same time of day (around 10 a.m.), and the colors have been matched so that variations in color reflect actual changes on the ground. During the height of July and August, direct light illuminates both the mountain tops and valley floors around the lake. Moving into September and October, the sun is lower in the sky, and shadows paint the western side of the mountains. By December, shadows dominate, with only eastern mountain faces reflecting bright light. The shadows diminish throughout the spring and disappear again in summer.

The changes in light cause changes in some plants. The pine forests in the Carson Mountains east of Lake Tahoe show little variation from month to month, but the crops in Carson Valley grow in accord with the seasons. Irrigation keeps plants green throughout the summer, but shifts in light and temperatures signal the end of the growing season. Crops mature and are harvested. The fields turn brown until they are covered with snow, ready to begin the cycle again when light and warmth return in the spring.