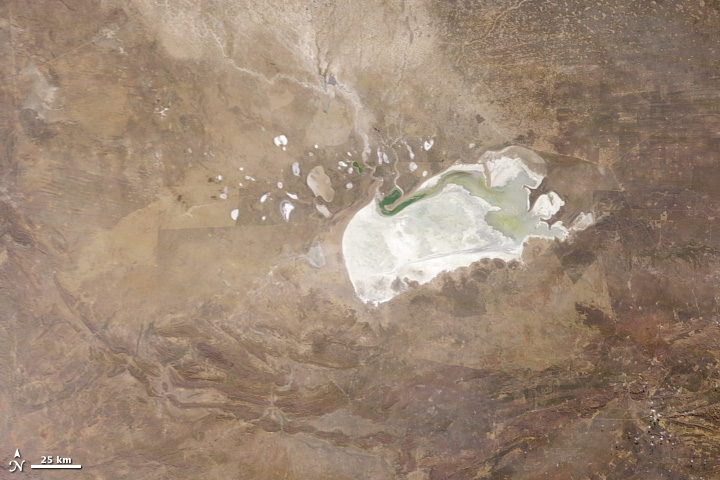 Fires used to be routine in the grasslands and woodlands surrounding Etosha Pan, an old, salt-encrusted lake bottom in northwestern Namibia. The region is best known for Etosha National Park, a wildlife preserve that is home to substantial populations of rhinos, elephants, lions, and other large mammals.

Before human intervention, all of Etosha National Park’s savannas and mopane woodlands would burn about once per decade. Fires would usually come after a wet spell had produced a surge of vegetation growth. As plants dried up in this arid region—normal rainfall is 250 to 500 millimeters (10–20 inches) per year—it became ideal tinder for bush fires triggered by lightning storms.

But in the decades after the park’s establishment in 1907, managers tended to extinguish wildfires quickly because they believed them to be harmful to savanna ecosystems. As recently as the 1970s, manmade fires were expressly forbidden and teams of firefighters fought lightning-triggered fires aggressively.

Over the years, fire management at Etosha National Park evolved. With evidence piling up that savannas needed occasional fire to keep the ecosystem healthy, park managers started using it as a tool in 1981. However, there were no firm guidelines on how to use prescribed fires or cope with accidental fires. In September 2011, for instance, a destructive wildfire was ignited by a nearby charcoal kiln. The flames raged through the park, charring 370,000 hectares (910,000 acres) of vegetation and killing at least 30 rhinos, 50 giraffes, and 7 elephants.

Since then, park managers have redoubled their efforts to establish a preventative burning plan to minimize the likelihood of such devastating fires. Lightning-ignited blazes are allowed to burn more frequently, and park managers continue to experiment with prescribed burns that create a patchwork of natural fire breaks. These managed burns also prevent the buildup of excess fuel, meaning future wildfires should be less severe.

The Moderate Resolution Imaging Spectroradiometer (MODIS) on NASA’s Terra satellite observed a managed burn in June 2012, in an area just north of the 2011 fire. The managed fire was set on June 5, west of Etosha Pan. As shown in the images, it spread gradually north and west. But on June 9th and 10th, winds picked up considerably and park managers lost control of the fire. As it rapidly spread westward, Namibian authorities decided it had grown so large that they should fight it. Within a week, the fire was extinguished.

Despite temporarily losing control of the fire, the park’s managers achieved much of what they had hoped. Most of the areas were not as not severely burned as in previous blazes, and a patchwork of burn scars and fire breaks were created. And unlike the catastrophic 2011 fire, not one game animal died in the 2012 blaze.

Still, for a park that is continuing to refine its burning strategy, there were lessons to be learned from June 2012. “Ignition points need to be chosen with care and in areas where the grading of the internal firebreaks have been completed,” Etosha National Park conservation scientist Marthin Kasaona noted in a report. He also recommended that fires caused by lightning or other sources should be allowed to burn and not contained unless human life or infrastructure is threatened.