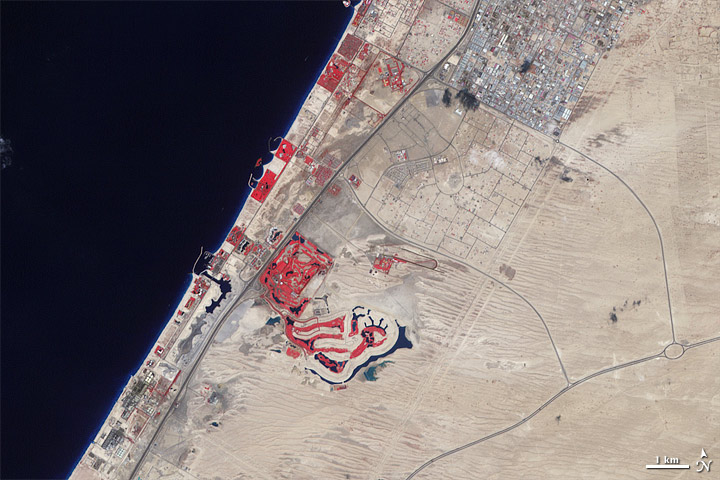 To expand the possibilities for beachfront tourist development, Dubai, part of the United Arab Emirates, undertook a massive engineering project to create hundreds of artificial islands along its Persian Gulf coastline. Built from sand dredged from the sea floor and protected from erosion by rock breakwaters, the islands were shaped into recognizable forms, including two large palm trees. The first Palm Island constructed was Palm Jumeirah, and the Advanced Spaceborne Thermal Emission and Reflection Radiometer (ASTER) on NASA’s Terra satellite observed its progress from 2000 to 2011.

In these false-color images, bare ground appears brown, vegetation appears red, water appears dark blue, and buildings and paved surfaces appear light blue or gray. The first image, acquired in November of 2000, shows the area prior to the island’s construction. The image from February 2002, shows the barest beginnings of the artificial archipelago. By October 2002, substantial progress had been made on Palm Jumeirah, with many sandy “palm fronds” inside a circular breakwater.

By November 2003, the palm tree has been constructed, and buildings and vegetation populate Palm Jumeirah in the images from November 2004, October 2005, September 2006, March 2007, and November 2008. The final image, acquired in February 2011, shows vegetation on most of the palm fronds, and numerous buildings on the tree trunk.

Inland, changes are just as dramatic between November 2000 and February 2011. In the earliest image, empty desert fills the lower right quadrant of the image, as cityscape primarily hugs the coast. As the years pass, urbanization spreads, and the final image shows the area almost entirely filled by roads, buildings, and irrigated land.