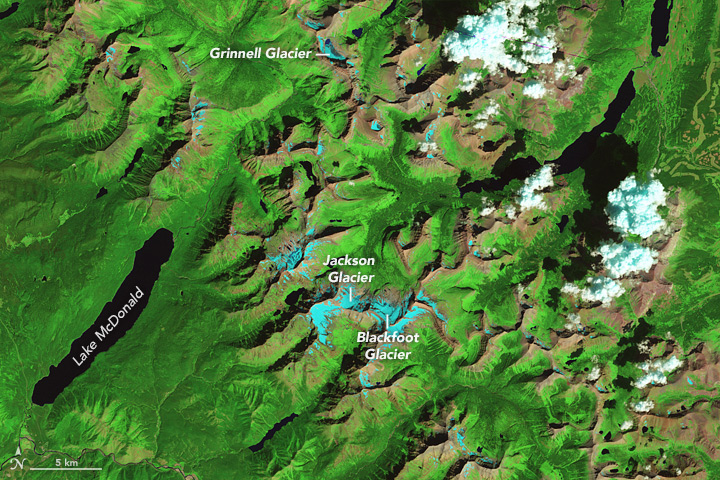 Scientists arrived at the year 2030 through a simple geospatial model running on software from the 1990s. That model took into account the basic parameters, such as warmer summer temperatures and changes in snowfall. It did not account for more complicated factors such as “snow avalanching” and “snow scouring”—things that can keep a small glacier alive.

But despite its simplicity, the model painted an accurate, if broad, picture of the situation: the shrinking of the ice in Glacier National Park is real and happening fast. “People focus too much on the date, but the basic story is still true,” said Daniel Fagre, a research ecologist for the Northern Rocky Mountain Science Center of the U.S. Geological Survey (USGS). “These glaciers will be more or less gone in the next several decades.”

In 1850, there were about 150 documented glaciers in this area of the Rocky Mountains. Most were still there when the national park was established in 1910. Maps of the glaciers in 1968—surveyed by airplane by the USGS—counted 83 ice-and-snow bodies with areas greater than 0.1 square kilometers. Today the number of ice bodies is 25.

Photographs and ground-based surveys have played an important role in tracking the park’s glaciers. These are not behemoths like Jakobshavn Glacier in Greenland or Columbia Glacier in Alaska, so change here is not quite as obvious in satellite imagery. But the change is still apparent; so, too, is the sense of how the shrinking of the glaciers fits into broader ecosystem changes.

This series of false-color satellite images chronicles change in the park about every five years between 1984 and 2015. All of the images were acquired by instruments on Landsat satellites: the Thematic Mapper on Landsat 5, the Enhanced Thematic Mapper Plus on Landsat 7, and the Operational Land Imager on Landsat 8. Each image was acquired in late summer or early fall to reduce the amount of seasonal snow in the scenes. It is possible for some seasonal snow to persist into August, but most of the blue color in these images is “permanent” snow and ice.

The scenes show just a portion of the park’s full extent, which spans 4,100 square kilometers (1,583 square miles) in northwestern Montana. The area shown is the central portion of the park, extending from the Lake McDonald area (west) to the St. Mary area (east).

The southern portion of the image shows the Blackfoot-Jackson Glacier Basin, an area of the park that contains the largest concentration of glaciers. Even before this image series begins, glaciers in this area had decreased from 21.6 square kilometers (8.3 square miles) in area in 1850 to just 7.4 square kilometers (2.9 square miles) in 1979. The two glaciers once ran together, as this photograph from 1914 shows; by 2009, they had retreated into separate valleys.

The north end of the image shows Grinnell Glacier, possibly the most-studied piece of ice in the park. Warm summer temperatures are causing this glacier to lose about 2 to 3 acres per year, and sometimes as much as 10 acres. “On a glacier only 115 acres in size,” Fagre said, “that’s a huge loss.” The change here is slightly more noticeable because of the stark contrast with Upper Grinnell Lake, which has grown in the past few decades as the glacier has retreated. In addition to shrinking in area, Grinnell has rapidly thinned.

“All of a sudden, it’s as flat as a pancake compared to its previous bulk,” Fagre said. “The reduced mass from thinning makes this glacier particularly vulnerable. We can expect to see another big shrinkage in its footprint very soon, maybe by the end of this summer.”

Other phenomena have left their mark on the landscape. In 2006 you can see the burn scar from the Red Eagle fire, which burned 34,000 acres. In the 2015 image, burn scars are visible from the Thompson fire (bottom) and Reynolds Creek fire (top). As global and regional climate continues to warm, the frequency of fire in the park could increase.