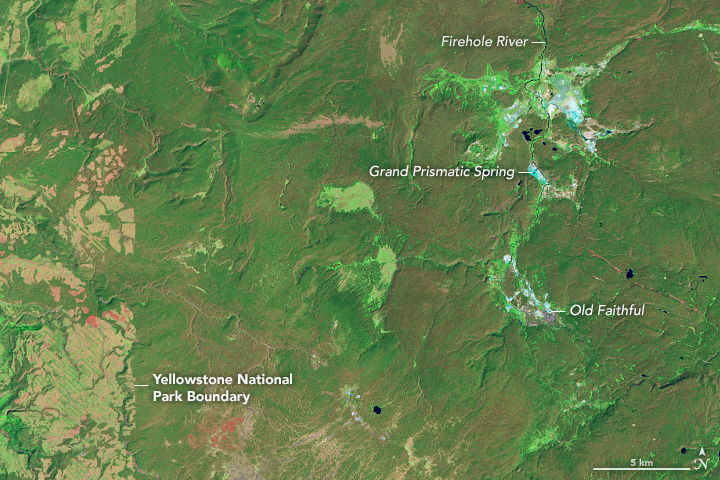 In the summer of 1988, lightning- and human-ignited fires consumed vast stretches of Yellowstone National Park. More than 25,000 firefighters cycled through the park combating 50 wildfires, seven of which became major wildfires. By the time the first snowfall extinguished the last flames in September, 793,000 of the park’s 2,221,800 acres had burned.

One of the largest fires raced across western Yellowstone, threatening historic structures around the Old Faithful geyser basin. This series of images shows the scars left in the wake of the western Yellowstone fires and the slow recovery in the 32 years that followed. Taken by Landsat 5 and Landsat 8, the images were made with a combination of visible and infrared light (green, short-wave infrared, and near infrared) to highlight the burned area and changes in vegetation.

In 1987, dense stands of tall, straight pine trees covered the high, volcanic plateau. The old forest is dark green in the image. The summertime forest is broken up by bright green, grassy river meadows and the occasional brush and grass plain, lighter green and tan. Mineral-rich geyser fields are pale blue and white, and lakes are dark blue. Beneath the green vegetation, a pinkish tinge emerges in places, which may indicate old burn scars or simply summer dormant grasses and plants.

In the years that follow, the burn scar fades progressively. On the ground, grasses and wildflowers sprung up from the ashes. Over time, tiny pine trees took root and began to grow. The new trees grow more quickly (photosynthesize at a faster rate) than older, mature forests. Because they use and reflect sunlight differently than older forests, the new trees are lighter in color in these images. Fingers of new forest are most evident intruding into the narrow strip of burned land on the right edge of the image. Forests are likely returning elsewhere as well, but the small trees do not produce a dense enough canopy to show up well in the image. Some of the other changes seen from year to year are seasonal differences; the images range from July to October.

Though changes have occurred between 1988 and 2019, recovery has been slow. Even in 2019, the burned area is still discernible, though much of the eastern portion of the image is covered once again by trees and vegetation. The high-elevation plateau has a short growing season, with hot, dry summers and cold, harsh winters. In such an environment, it will take decades for the forest to reach its former state.

Scientists and land managers use satellite images such as these to assess burn severity, extent, and recovery. There are no realistic alternatives to see how the entire area is recovering. Walking through some of the burned areas could give a false impression of the conditions, since the burn severity and recovery were not uniform. Even aerial surveys are limited in the amount of land that can realistically be observed at any one time. Only satellites provide the big picture required to track recovery throughout the ecosystem.