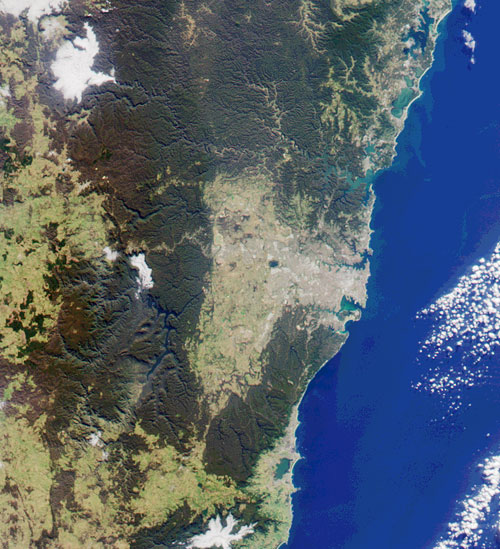 This image from the Multi-angle Imaging Spectroradiometer's nadir-looking camera was acquired on July 11, 2000 and shows a 200-kilometer section of the eastern Australian coast, centered around the Sydney metropolitan area. This city is host to the 2000 Olympic Games, which open Friday, September 15. Sydney Harbour is the rugged-shaped inlet toward the northern side of the grey-colored central city area. Olympic Park, the main venue for the Games, is on a southern arm of the harbor, about 20 kilometers from the coast.

The areas to the north, west, and south of Sydney are characterized by rugged terrain and extensive forests. Just north of the city the Ku-ring-gai Chase and Brisbane Waters National Parks surround the Hawkesbury River estuary. Further north and separated from the ocean by narrow dunes are a series of lakes, the two largest in this image being Lake Macquarie (at the top) and Tuggerah Lake.

West of the metropolitan area, some 65 kilometers inland, are the Blue Mountains. The primary transport corridor for road and rail across the mountains is clearly visible, and just north of it is the steep-sided Grose River valley. In the southern part of the mountains is a series of long valleys filled by Lake Burragorang, a major source of Sydney's water supply.