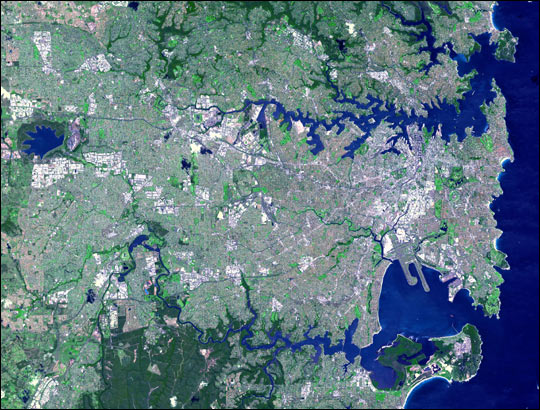 Home to more than four million people from over 100 countries, Sydney is the largest and most cosmopolitan of Australia’s cities. This simulated true-color Advanced Spaceborne Thermal Emission and Reflection Radiometer (ASTER) image shows the Sydney metropolitan area on October 12, 2001, and covers an area of 42 by 33 kilometers. The image displays the concentrated development of the urban area. Sustainable use of water and effective water management are prime concerns for the area. The city has developed numerous dams and water storage areas, including the Prospect Reservoir, located at the upper left edge of the image. Built in 1888, this reservoir is one of Sydney’s oldest and was once the major water storage facility for the city.

Surrounding Sydney on all sides except its shoreline are National Parks and Preserves, and at the bottom of the image, the forested terrain of the park system south of the city can be seen. Sydney has two superb natural harbors: Botany Bay to the south and Sydney Harbor to the north. The strips of land extending south into Botany Bay are the runways of the Sydney Airport. Inhabited by the Aboriginal people for at least 50,000 years, Sydney was visited by the English captain James Cook in 1770 and later settled in 1788 by another English Captain, Arthur Phillip, and 11 ships filled with over 1000 passengers, which eventually came to be known as the First Fleet. 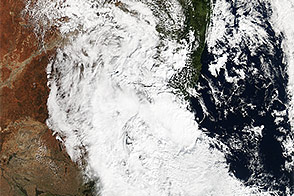 Heavy wind and rain battered Sydney and other parts of the Australian state of New South Wales.