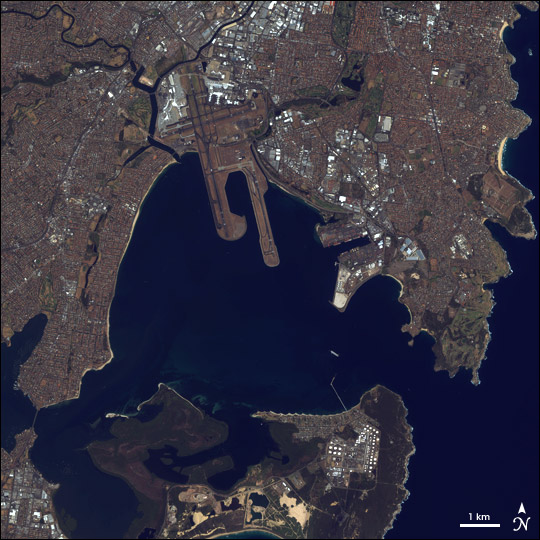 On April 29, 1770, Captain Cook’s ship, the Endeavour, sailed into a sheltered bay on Australia’s eastern coast, bringing the first Europeans known to have visited the continent. Botany Bay, pictured in the image above, earned its name from the diverse collection of new and unfamiliar botanical specimens described and collected by the expedition’s botanist, Sir Joseph Banks. While other portions of Australia were known to Europe by that time, the fertile lands on the east coast were not. Previously explored coastal areas were considered inhospitable. This remains essentially true even today: Australia’s population of 20 million mostly live in the cities on or near the east or southeast coast.

Cook suggested Botany Bay as a possible future colony site, but the settlers arriving with the First Fleet in January of 1788 found the cove to the north more suitable. On January 26, 1788, the settlers established the city of Sydney. That date is now celebrated in Australia as “Australia Day” and considered the founding of the nation.

Sydney has grown a great deal since its beginnings, and today the city’s suburbs stretch south from Sydney Cove (out of the scene to the north) and surround Botany Bay (pictured). Two major Sydney landmarks are on or next to the bay: Port Botany, a major terminal for container ships (located at about 3 o’clock), and Kingsford-Smith Airport, Sydney’s international airport (located at about 12 o’clock). This natural-colour image, acquired by the IKONOS satellite on February 7, 2000, shows details as small as 4 meters (13 feet) across.

Aircraft on the runways are clearly visible in the high-resolution image. Most of the planes have a distinct white fuselage and red tail, the colouration of the national airline, QANTAS. The strong red tone of much of the land around the bay reflects the prevalence of terracotta tile roofing. Light yellow arcs along the water’s edge are sandy beaches.

The airport gets its name from the Australian aviation pioneer Sir Charles Edward Kingsford-Smith. He is best known for being the first pilot to cross the Pacific Ocean, flying from Oakland, California, to Brisbane, Queensland, via Hawaii and Fiji. Until the advent of long-range commericial aircraft, planes continued to use his flight route to reach Australia from the United States, but arriving in Sydney rather than Brisbane.

Image by Jesse Allen, based on data copyright DigitalGlobe