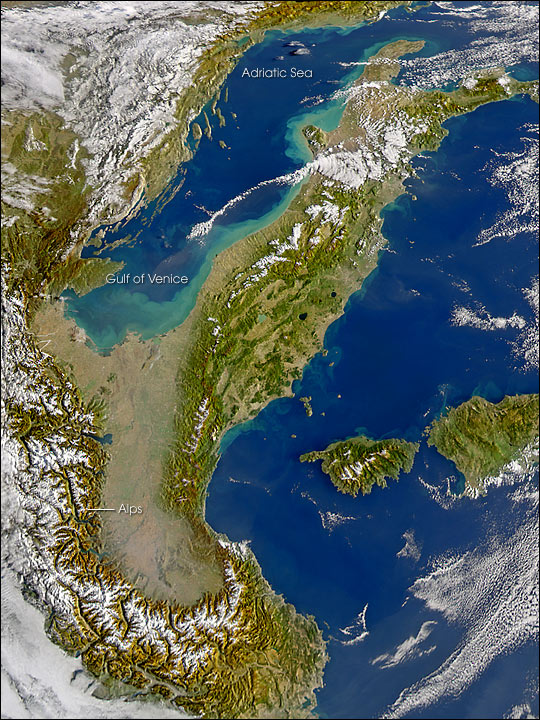 An intense winter storm raced across the Mediterranean on November 13 and 14, 2004. Gale-force winds sank three ships off Algiers, Algeria, and heavy rain drenched the country. Overnight, the storm moved north to Italy and the Adriatic Sea. Here, the storm halted air, road and sea traffic with winds that gusted up to 200 kilometers per hour (125 mph), according to local media reports. As it swept east across Europe on November 15, the storm cut off power and damaged communities in Croatia on the Adriatic coast and in Romania, where more than 50 centimeters (18 inches) of snow fell.

Two days later, the clouds had cleared enough to give the Sea-viewing Wide Field-of-view (SeaWiFS) Sensor aboard the OrbView-2 satellite this clear view of the Adriatic Sea. In the wake of the storm, the waters along the Italian coastline are a milky green where the wind-tossed waves have churned the water, bringing sediment from the sea floor to the surface. Thick clouds of sediment hang in the shallow waters of the Gulf of Venice, but are dissipated in the deeper waters of the Adriatic. Further evidence of the storm can be seen in the mountains of Croatia, and Bosnia and Herzegovina, which are capped with snow. In the lower left corner of the image, the craggy Alps are also coated with a white blanket of snow. SeaWiFS obtained this image on November 17, 2004.

Image provided by the SeaWiFS Project, NASA/Goddard Space Flight Center, and ORBIMAGE. This SeaWiFS image is for research or educational use only. All commercial use of SeaWiFS data and imagery must be coordinated with ORBIMAGE.

Snow and Dust over Inner Mongolia