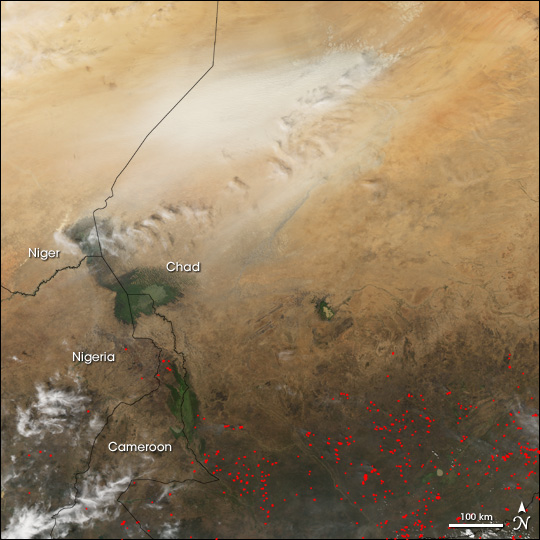 A science teacher or college professor could probably spend an entire school year teaching students about all the Earth system processes recorded in this image of central Africa captured by the Moderate Resolution Imaging Spectroradiometer (MODIS) on NASA’s Aqua satellite on November 18, 2004. From biomes to geology to climate change to humans’ use—and overuse— of Earth’s landscapes, this image has them all.

Northern Africa’s ocean of sand and rock, the Sahara Desert, spans the top of the image. Lake Chad glows at the left center of the scene like an emerald. Actively burning fires, probably agricultural considering the location and time of year, are scattered across the southern part of the image, veiling the landscape with thin, gray smoke. A dust storm brightens the top center of the image. Between the Sahara and the savannas lies a zone of transitional vegetation known as the Sahel. The semi-arid region creates a sparse “green belt” south of the desert, and the thin vegetation looks brownish-green in this image.

Although the Sahara Desert has been around for hundreds of thousands, possibly millions of years, climate variations have produced some eras that were wetter than others. Today, Lake Chad seems like little more than a muddy puddle surrounded by increasingly dune-streaked wetland (tan stripes across the green vegetation). But between 5,000-10,000 years ago, a much larger lake extended across the area, a low-lying basin, and the lake’s surface level was perhaps 120 meters higher above sea level than the level is today. Today, part of the former lake bed, the Bodele Depression, is probably the largest single source of wind-blown dust in the world. In the image, a dust storm is whipping across the Bodele, north and northeast of Lake Chad, softening the orange sands of the Sahara into a pale tan.

At the southern margin of the Sahara, the Sahel is a delicately balanced ecosystem, sensitive to human pressures and year-to-year changes in rainfall. Although people have been living and using the landscape in the Sahel for hundreds, probably thousands of years, the more intensive demands of today’s growing populations have made desertification a serious problem. Land disturbances such as overgrazing and soil compaction by cattle, overuse of fire, and water demands can create pockets of desert in this fragile ecosystem.

Lake Chad is a victim of both short-term climate change and overuse; in 35 years, it has shrunk 95 percent. Demand for water for people, livestock, and irrigation in the four countries surrounding Lake Chad is shrinking the lake more rapidly than rainfall is replenishing it. Some researchers have proposed that the decreasing rainfall itself is part of a human-caused “domino effect,” in which overgrazing reduces vegetation that helps recycle moisture back into the atmosphere. Lack of moisture and rainfall heighten the demand for irrigation water from the lake, shrinking it further. This depletion is a serious concern for the surrounding countries (clockwise from top left): Niger, Chad, Cameroon, and Nigeria.